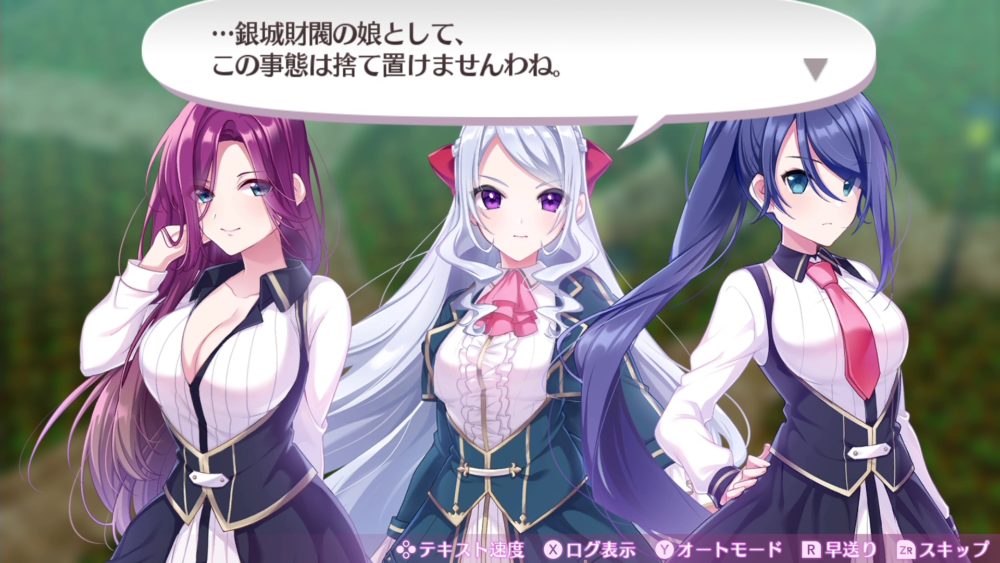 Today D3 Publisher released a large batch of screenshots and details about its upcoming game Omega Labyrinth Life for Switch, which will also be released for PS4 (but heavily censored) as Labyrinth Life.

We get to see the cast of ladies that we’ll be able to play and those who will support them, and then we hear about the story.

Belfleur Girls’ Academy has a very large and beautiful garden, and a legend says that thanks to the mysterious flower named “Flora” that can be found in the middle of the garden, other flowers will forever be in bloom.

Hinata Akatsuki is a new transfer student that just joined this school for super-high class princesses. While she was excited about her new school life, the following day the flowers suddenly wither. This upsets the students since the garden was the symbol of their pride and felt like something that supported their dreams.

In order to restore the garden, they challenged adventure in the Holy Dungeon.

The game is a (surprisingly) orthodox roguelike RPG, with the dungeon changing every time you enter. If you get defeated in the dungeon, you lose all your equipment and items.

Battles are turn-based, with enemies and player characters acting in sequence.

On top of levels increasing with the experience, you also gain Omega Power by defeating enemies. It accumulates in a maiden’s bosom, and the more power piles up, the bigger it becomes.

The upper limit is a Z-cup. Every time the cup size grows, HP and skill cooldowns are recovered, while abilities like strength increase. You can even enter a special mode that doubles your stats for a while.

The W Chest System lets you bring a companion to the dungeon, and you can switch the leader at any time depending on the weaknesses of the enemies. The only limitation is that you can switch only when the partner is no more than three tiles from the leader.

Other friends will also appear in dungeons and provide items or special buffs, and you can also use them to replace your partner on the fly.

There is more gameplay in Omega Labyrinth Life beyond dungeons, and you can enjoy school life with your friends. Characters can deepen their ties by chatting , and you may get to see a different side of them compared to what they show during dungeon crawling.

There are several areas that can be enjoyed in the Academy. In the cafeteria, you can purchase not only food but also emergency underwear.

The dormitory includes large baths where you can relax and heal. The greenhouse houses beautiful flowers and is also used for aromatherapy.

The large garden is the symbol of the school, and its center is dominated by a statue of the Holy Flower Spirit.

The gate is where students come and go, and there is also a tennis court close by. The first school building houses the chemistry class, and some say experiments are performed there at night. The second one is newer and includes a soundproof self-study room.

The Omega Fountain can provide Omega Power and some say it’s connected to the dungeon.

You can take care of the garden by seeding new flowers, which will then grow and bloom as time goes by. Harvesting them provides a variety of items useful for the game.

You can even customize the academy to your liking with things like trees, hedges, lampposts, benches, statues, and more.

The identification system returns from previous games of the series, and you can identify unknown items by placing them in the valley of a maiden’s chest and injecting Omega Power. The items can also change their appearance with various effects during the identification process.

The Extasy Blooming system allows maidens to use the flower nectar that can be obtained in the dungeon and around the school to enter the world of dreams while taking a nap or even enjoying cosplay. By touching during such dreams, you can release the power of flowers hidden within them and raise basic stats or unlock special abilities.

If you do it well, you can reach the “Full Bloom Break” status, that causes clothes to fall apart and if you keep going, the girl will finally enter the “Extasy Blooming The World” state summoning the flower of time. This will in turn stop time, allowing you to keep going.

The energy accumulated during the Extasy Blooming (when time is running) is so intense that changes the surrounding air to liquid, in a process named Extasy Splash. The water created with this process can be used to water the garden.

You can check out all the screenshots in the gallery below. Do keep in mind that since the PS4 version is heavily censored, those apply to the Switch version, while some of these scenes will not be present on PS4, or will be toned down.

Omega Labyrinth Life and Labyrinth Life will release respectively for Nintendo Switch and PS4 in Japan on August 1. No western release has been announced for now.