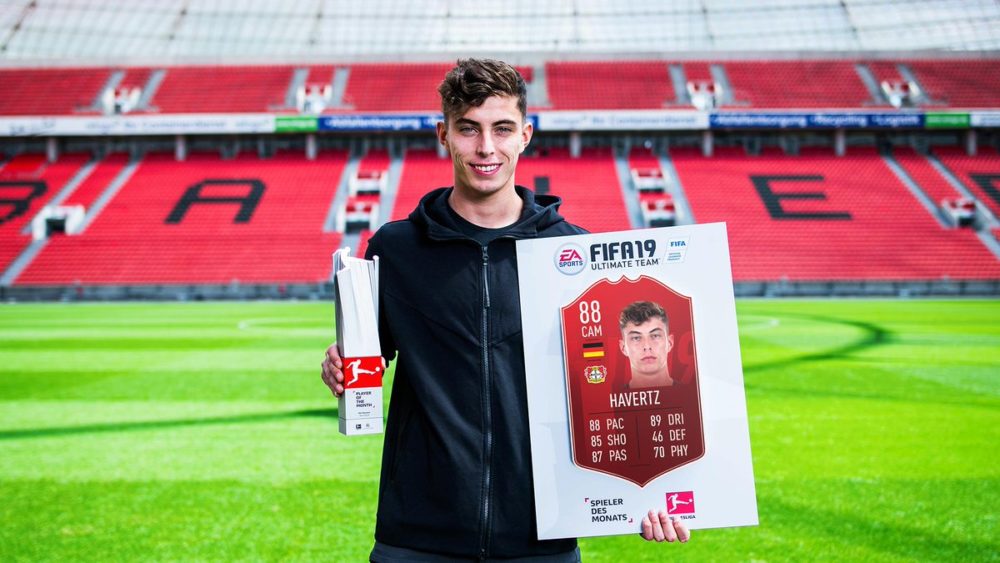 We might be a week into TOTS, but that doesn’t mean that the regularly scheduled SBCs stop. It’s time for the Bundesliga POTM SBC for April. Here’s what you need to know about how to complete the Bundesliga Player of the Month Havertz SBC in FIFA 19.

The POTM card is two ratings lower than his Future Stars card.

It’s not too expensive and is a good card, being tall and having a five-star weak foot, but it’s not good enough for it to be worth doing, considering the quality of the cards that are due to come from TOTS over the next few weeks.

It’s less than 100k to complete from scratch, and you get some good packs back, which makes it about a third of the price of the Future Stars card, but it’s just not an end game card that’s worth getting. Here are the Havertz SBC requirements.

For the first Haverts SBC squad, the best thing to do is to build an 83 rated squad using players from the likes of the Liga Nos or Chinese League, where there are plenty of 82s and 83s, rather than using the major FIFA 19 leagues.

You can then slip in the Leverkusen player anywhere, with the likes of Hradecky being a good option. You will probably need to stick to the right positions for most of the players, though, since you need 85 chemistry, which is higher than usual.

For the Bundesliga squad in the Havertz SBC, you’ll have to use players from multiple leagues. To get the 85 chemistry required, you should use one league and then add in the additional players at the end, even if they don’t link to the main squad.

You can also use the TOTS player from a different league, to tick off two requirements.

Be sure to pick a TOTW player from the current active FIFA 19 squad, as they’ll stay cheaper by being actively packed. Try to use a goalkeeper for the Bundesliga player, as they’re usually cheaper.

That’s everything you need to know about how to complete the Bundesliga Player of the Month Havertz SBC in FIFA 19. For more tips and tricks on the game, be sure to search for Twinfinite.