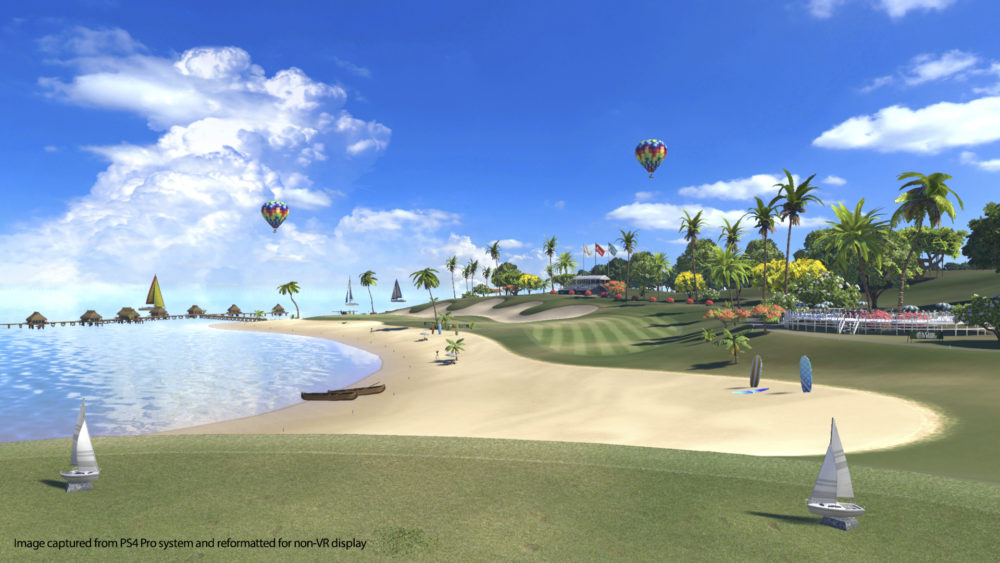 Wii Sports always springs to mind first when I think of golf games. Bringing motion control to the Everybody’s Golf series, alongside VR, brings back memories of hitting the fairways on Nintendo’s console more than any other.

Everybody’s Golf VR is much more than glorified Wii Sports though. Just as the base Everybody’s Golf series is, the VR game is deceptively deep. It’s far more of a golf sim than a cartoony arcade reimagining, which plays into it feeling great to play.

Most of the gameplay elements have been carried over.

The wind works in the same way, getting stronger as you make your way through the different courses, you’re given a bar to gauge flag distance and power, and you can change where you’re aiming with the few clicks of a button.

The presentation of these elements is great too. The UI is very well designed, with everything you need being easy, making it simple to analyze the best approach.

Looking at the ball gives you a great view of the power indicator, the layout of the hole, the direction of your swing, and the wind.

You don’t have the move your head around to see everything you need, and the design is very clear, allowing you to keep your eyes on the ball and focus on your swing.

While the UI throws quite a lot at you in terms of information, it doesn’t get in the way of your view of the hole or the wider surrounding area, which is a testament to how well implemented it is.

It does mean that actually taking a shot is pretty complex too, and getting it right takes quite a bit of practice. Rather than just moving the aim indicator and pressing a button twice to hit the ball, you have to be precise with your actual swing.

Hitting the ball far enough off the tee is easy enough, but getting the direction right is really tough. I was pretty rubbish at first. I had a tendency to fade the shot, no matter how I changed my stance or swing angle.

That issue has never been so noticeable in my real-world golf game so it may be something that comes with the control of the move wand, but I’m certainly no Tiger Woods, so it could just as easily be (probably is) my lack of skill.

Using a shorter backswing, getting the power from a flick of the wrist before making contact with the ball, made it easier to be more accurate as I learned the courses.

You’re not punished too much for miss-hits on the Forest or Seaside courses either.

There are few hazards and generous boundaries, but being wayward on the Dinosaur course is dangerous, as the out of bounds markers are just yards from the edge of the fairway.

Starting off with more gentle swings allows you to get used to the directions so that you’re more accurate once you unlock the Dinosaur course.

The appeal of Everybody’s Golf in VR, though, is that you’re as involved as you can be in the actual hitting of the ball, and the feel is perfect.

The move controllers may be old tech at this point, and Everybody’s Gold VR can be almost unplayable in a bright room due to the sensitivity of the wands and the camera, but the feedback you get from them at the point of contact is spot-on.

It’s shocking how much it feels like you’re holding a club and actually hitting the ball. The vibration from the move, the sound of the contact, and the precise visual cues work together perfectly to immerse you in the swing.

If you’ve played Beat Saber, it’s a similar sensation to wielding the lightsabers and hitting the blocks in that game.

It’s here that the intricacy of the swing mechanics help too. You have to focus on getting the right contact, and putting your all into improving is really rewarding.

Sitting slumped on your sofa trying to play with just the flick of the wrist, Wii Sports style, isn’t going to cut it here.

The more focus you put into getting your swing right, the better you’re going to be, and the more immersive the game’s going to be. It’s incredible how great Everybody’s Golf VR feels to play, but a lot of it is down to the effort you put in.

It also helps that it’s one of the best looking PlayStation VR games too.

The distinct style of the series has been brought over, focusing on the vibrant colors of the world. Maybe as a result of the style, the visuals are crisper than almost any other I’ve seen on Sony’s headset.

From the driving range your start at, to the reception area and courses, there’s a great amount of detail to the world. You’re sprinkled with confetti when you sink a birdie and leaves sweep around in the wind.

Visually, Everybody’s Golf VR has got everything the base game has, other than additional competitors scurrying around.

The courses can feel a little empty at times, at least in comparison to the base Everybody’s Golf

. A lot of that is down to the fact that progression isn’t split into tournaments like you’ll be used to, which is disappointing in and of itself, rather you’re given a set of options to mix and match what you want.

It can feel a little like playing a practice round at times, but a few new features have been implemented to try and counter that feeling.

The main one is caddies, who cutely introduce themselves at the start of each round, give you pointers as you play, and even cheer you on as you do well.

Each one even has their own set of narrative ‘events’ which play out at set points as you progress and are short cutscenes of you interacting with them.

They are cheesy and cute, and the caddies do begin to repeat themselves a lot, but some of the events make excellent use of the immersion of VR, occasionally in surprisingly terrifying ways.

If you’re scared of heights, just be prepared to suddenly close your eyes.

There are other little quirks that counter the lack of life on the courses, such as swarms of bees that’ll attack you on the Seaside course or the dinosaurs that’ll stalk you and swoop overhead on the Dinosaur themed holes.

It does help to distract you from the fact that you and your caddy friend are the only ones around.

The biggest disappointment, though, is the lack of multiplayer options. You can compare your course records against friends and players around the world, but there are no competition options to face off against certain people.

Everybody’s Golf shone in multiplayer as you could use upgrades you’d unlocked to engage in actual competition.

Being able to battle it out against other golfers, whether that be in single or multiplayer, is sorely missing and means that doing well results in little more than granting you leaderboard bragging rights and the unlocking of some new content.

Just like the base game, Everybody’s Golf VR is deceptively deep.

It’s much more of a golf sim than the cute visuals will have you expect, but it feels incredible to play. The impressive visuals, precision focused gameplay, and well-implemented UI make the established series shine in a new perspective.

Everybody’s Golf nails the most important thing: hitting the ball feels great. It’s just disappointing that there isn’t anything in the way of multiplayer to test your technique against your friends.