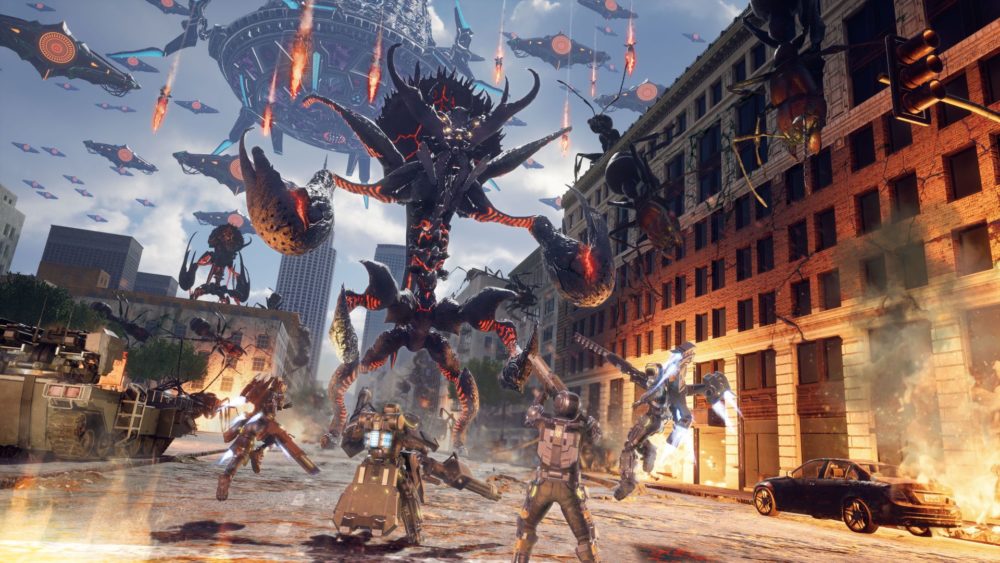 For the longest time, Earth Defense Force has been known as the cult B-movie of Japanese video games, combining charming jank with a ton of pure, unadulterated fun. The consequence of that is that the series has been stuck in its niche with a very dedicated and very passionate fan base, but few means of convincing newcomers to give it a try.

Earth Defense Force: Iron Rain is by D3 Publisher’s own admission an attempt to make the series more accessible and appealing for new fans and western audiences, but in the end, it feels still very much like your usual EDF game, with some caveats.

This time around, the story is mainly set in the west and places you in the role of a veteran soldier who spent several years in a coma after blowing up an Aggressor mothership. Assigned to a new squad, your mission is to kick alien butt all over the place.

Jokes aside (but is it really a joke?), the story is one of the main points of departure from previous EDF games, as it actually tries to take itself somewhat seriously. That being said, it’s still wacky enough to be enjoyable without weighing too much in the overall atmosphere of the series. If you think about the Starship Troopers movies, you won’t be too far from what we have here in terms of the balance between drama and silliness. 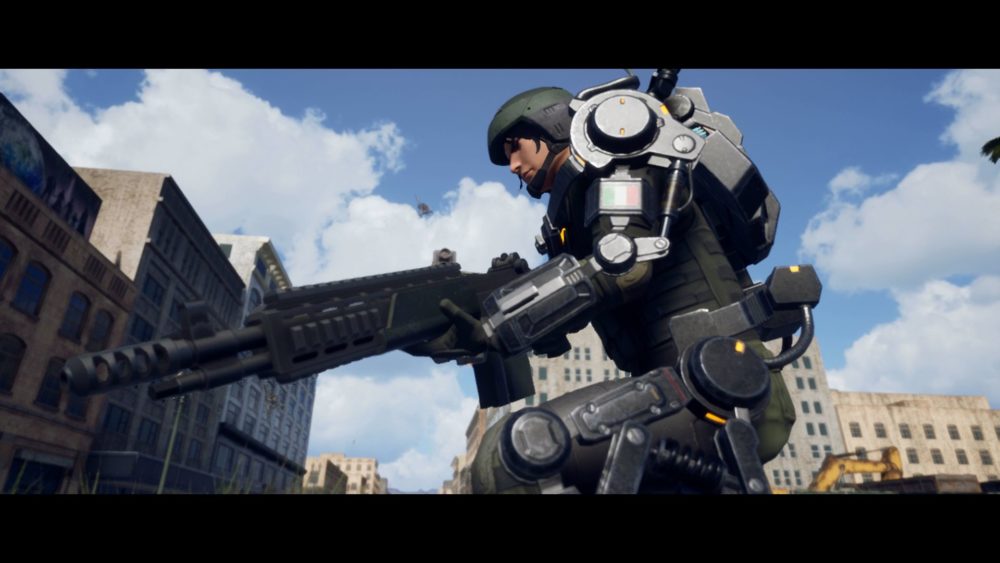 Taking a look at the audio, the game comes with full English and Japanese voice acting. Surprisingly, the English voices aren’t that bad. Normally Japanese games that don’t enjoy very high-budgets tend to be rather awful in this field, but this one won’t break your ears. Of course, the Japanese voices are still way better, which is par for the course.

The visuals are another brand new element coming with this spin-off. The good folks at Yuke’s injected a healthy dose of Unreal Engine into the game in order to make it look more polished compared to its predecessors.

While we’re not looking at a graphical marvel, the improvement is certainly visible especially in the character models and lighting, which are more in line with what you could expect from today’s games. That’s especially true in comparison with Earth Defense Force 5, which you could superficially mistake for a PS3 game.

That being said, environments are still pretty bland, and enemy models are a bit hit and miss. Yet, this has a very specific reason: the game throws at you veritable hordes of assorted critters, which means that each model can’t be all that detailed. This is pretty much inevitable.

As a matter of fact, even on PS4 Pro, there are still moments in which the frame rate starts feeling the impact of all those alien bodies. While I haven’t tested it on standard PS4, I can’t imagine it faring much better. If Yuke’s went for a higher level of visual fidelity, they would have had to cut down radically on the alien hordes, and we can’t have that in EDF, can we? 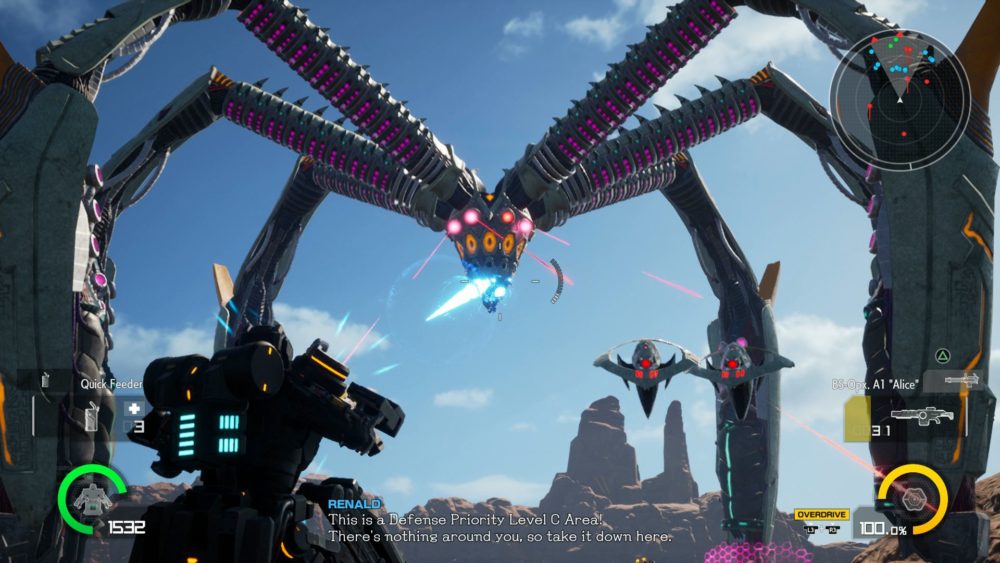 Speaking of hordes, that’s pretty much still the focus of the gameplay. In most missions, the Aggressors will throw at you literally all they have, including whole swarms of giant insects, mecha of various shapes and sizes, and even plenty of kaiju-like monsters.

They’re still an absolute delight to exterminate, exactly as they have always been in previous games of the franchise. Despite the attempt to please a wider audience, the core of EDF is still intact, and this puts a smile on my face. Unleashing hell against whole armies of aliens feels as good as ever.

The one caveat is that the previously mentioned insects include giant (and smaller) spiders. And yes, I know: spiders aren’t technically insects. What I mean is that if you’re affected by arachnophobia, you may have to consider your purchase carefully.

Another element that feels pretty familiar is the uneven difficulty of single-player missions. You’ll find some that are absolute hell even on Normal (especially if you haven’t unlocked some weapons that might make them easier), followed by cakewalks in which you won’t run the risk of dying even for a single moment. 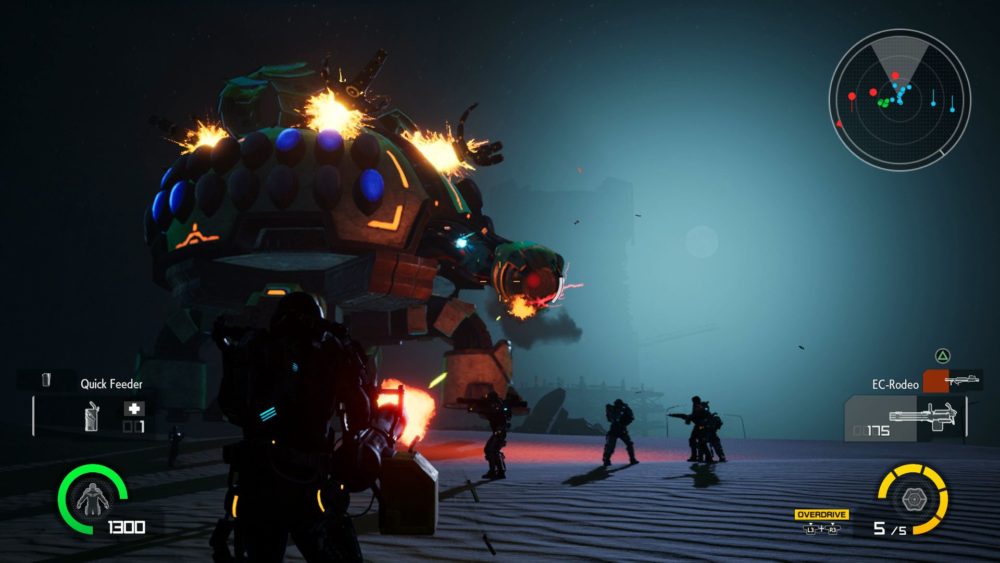 This is mitigated by the fact that there are plenty of levels of difficulty you can change whenever you like, allowing you to blunt the edge of the alien hordes or to make them more challenging if you so wish.

That being said, the best way to face difficult odds is with friends. Earth Defense Force: Iron Rain comes with both split-screen couch co-op (which is a rare Godsend in this day and age, and an absolute blast) and online in a squad of six players.

Not only is co-op the ultimate mode to enjoy the game, turning the slaughter into absolutely exhilarating mayhem that basically no other series offers, but it’s enriched by a deep character customization system that lets you show off your style. 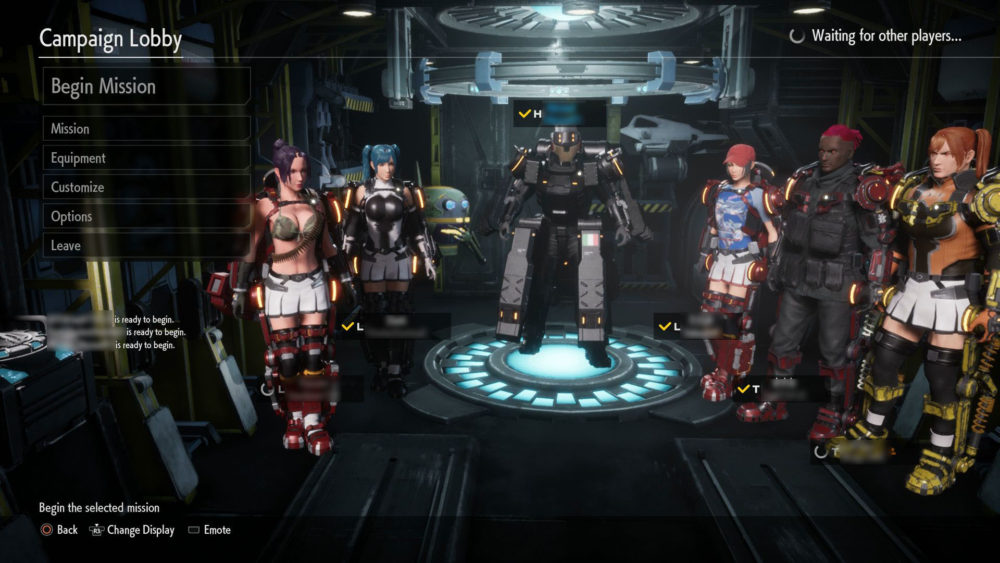 Character progression has been streamlined a bit compared to previous games of the series, but you can choose at any time between four completely different PA Gears (basically battle exoskeletons) and a wealth of weapons, vehicles, and gadgets that can vary your play style massively.

The best part of this is that unlocking new gear doesn’t always involve vertical progression: there is plenty of horizontal variability in the features of each weapon, and just as much situational flexibility. If you really like a gun that you unlocked earlier in the campaign, you can still use it for a while without necessarily feeling underpowered.

There is also competitive multiplayer, but it feels pretty much like an afterthought. It’s also really difficult to find a match at the moment of this writing, which isn’t surprising. Not only did the game just launch, but most players are likely busy enjoying the delightful co-op with friends and strangers alike. 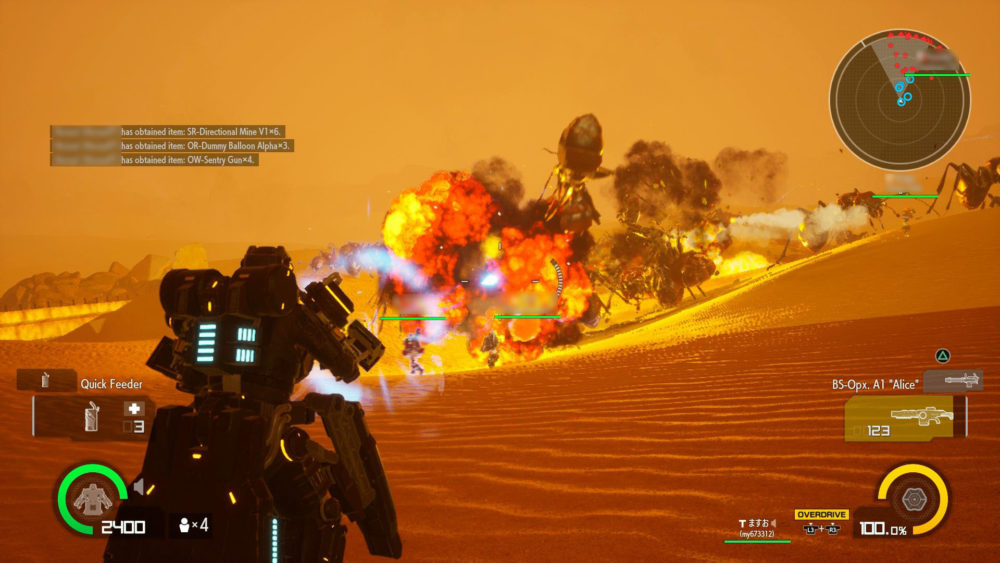 Ultimately, despite some flaws scattered here and there, Iron Rain is a solid entry in the Earth Defense Force series. If you were concerned that the attempted (and likely only marginally successful) reach for new audiences would have spoiled EDF’s hilariously exhilarating mayhem, I’m happy to report that it didn’t.

If you want a game which is pretty much the polar opposite of the vast majority of modern AAA titles — in most of the right ways — I can wholeheartedly recommend Earth Defense Force: Iron Rain.