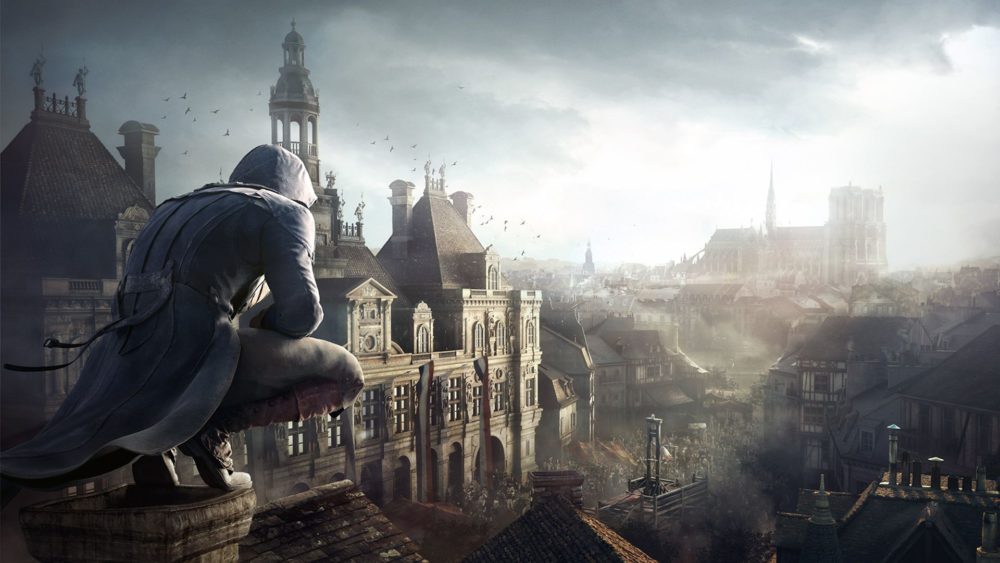 If you haven’t been keeping up with the news, there was a terrible incident over in Paris this past week. The Parisian cathedral Notre-Dame, a centuries-old icon of Christianity, caught fire, with the majority of the building collapsing. Fortunately, not everything in the building was lost, but it will take about five years or so until the landmark is properly restored.

For those that have played Assassin’s Creed Unity, which coincidentally takes place in Paris, you might remember that the game has a very faithful digital duplication of the famous Notre-Dame that took years of planning to finally get nailed down.

If you’ve never seen the cathedral in person before it burned out (like most of us), there’s one way for you to explore it, and that is by playing Assassin’s Creed Unity, which Ubisoft is currently giving away for free via UPlay (Ubisoft’s client for PC gaming).

As long as you have an account, you can log in and download the 2014 action-adventure title for no charge at all. Ubisoft will only be offering this deal until April 25, so make sure to grab it while you can and experience Notre-Dame during the French Revolution.

Also, another great thing that the French-based company is doing to help out is by donating towards the efforts of the restoration; Ubisoft Montreal stated in a press release that they have donated a whopping  €500,000 and encourages others to donate as well.

Ubisoft fans and Assassin’s Creed Unity fans are very pleased with how Ubisoft is stepping up to the plate and helping out in any way that they can, and people are even “review-bombing” Unity on Steam, but in the best way possible.

Resetera user, Kyougar, noticed that positive reviews for the game on Steam have shot way, way up in the past three days or so, with the title receiving almost 500 reviews since April 16. Note that the game is still the normal price of $29.99 on Steam, and yet, people are still shouting out Ubisoft with their positive reception and several heartfelt comments, which you can see below:

We seldom see titles on Steam get positive review bombs, as we’re used to seeing fans deal with their anger towards a publisher by bashing games on Steam, as a way to send a message.

We’ve recently seen this with 2K and Borderlands 3 –the long-awaited looter shooter sequel that was announced during PAX East. Once the news came out that the PC version of the game would be a timed exclusive on the Epic Games Store, Steam fans were enraged, giving every game in the Borderlands series negative reviews and comments on Steam, lowering the series’ overall score.

You see, Steam realized that review-bombings like this are bad, and can very possibly give a “good” game bad rep due to outside forces that have nothing to do with the video game itself.

For the first time ever, this prompted Steam to have user scores for Borderlands thrown out entirely. Well, scores that were left after April 3, when the review-bombing started, anyway. The action meant that over 4000 reviews were excluded from contributing to the overall user score.

Borderlands 2 is the first game on Steam to make use of the "off-topic reviews" marking. Over 4000 reviews are excluded from the rating calculation. pic.twitter.com/kUMN0Lqdx3

This new “rule” that Steam is beginning to implement is titled as “off-topic review activity,” flagging games that get random reviews due to users being “unhappy” with their publishers or for other unrelated reasons.

…which brings me to a very big ethical question: should Assassin’s Creed Unity get its latest wave of positive reviews taken down since they’re unrelated to the actual game? Of course, there is a really good reason here for people to show the game love, but Assassin’s Creed Unity is one of the worst games in the series, being plagued with bugs and technical issues at launch.

And Ubisoft themselves knew that the launch of that game back in 2014 was unsatisfactory, as they had to apologize to players and give away free DLC as a way of saying sorry for shipping a “broken” game.

I’m not saying that people should stay away from Unity, as Ubisoft has cleaned up a few of the issues ever since the game launched, but where does Steam fit into all of this? Should these reviews get taken down, or should they be left up?

It’s a hard question to answer, but if you read Steam’s guidelines for its new ruling, it’s pretty clear what the course of action should be.

“…An abnormal set of reviews that are largely unrelated to the likelihood that you would enjoy the product.”

The positive reviews should be commended, perhaps even publically praised by the powers that be, but then they should be swiftly removed from contributing to Unity’s overall score.

Steam users just need to stop review-bombing video games in general, whether they’re positive or not. It messes with the overall score of the game on Steam and there is absolutely no reason for it to happen. Bombing a game based on your views as a consumer towards the publisher is not the right way to go and should never be.

I really hope that that Steam notices the trend of review-bombing and puts their foot down, even when Steam users have their heart in the right place.

Ubisoft is doing incredible things right now in the aid of the now-destroyed Notre-Dame, but that has nothing to do with the quality of Assassin’s Creed Unity, it just doesn’t. There are many other ways for fans to show their love and/or hatred towards video game developers and publishers.