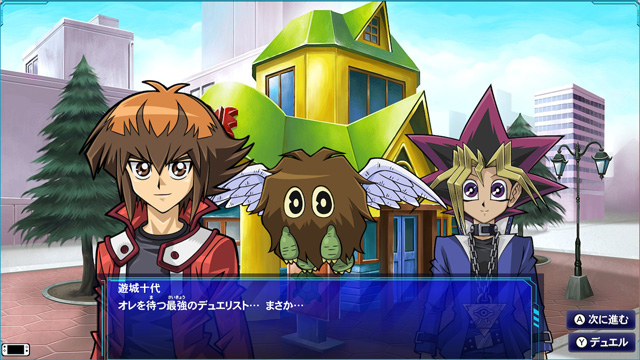 The game, which was initially announced in February to celebrate the 20th anniversary of the franchise, will be released in Japan on April 25 exclusively for Nintendo Switch. It will have a pretty compact price, 3,000 yen plus taxes. That’s about $27.

It will include the new “Master Rule” that is the latest implemented for the Official Card Game. The expansion Hidden Summoners will also be part of the menu.

145 characters will appear from every anime series (including the latest one Yu-Gi-Oh! VRAINS), and the story mode will let you duel them as you follow the plot of the various seasons.

Online gameplay is also included, allowing players to duel others from around the world. Besides ranked duels, there are also various game models like booster draft.

Below you can check out a the very first screenshots that came in the official press release alongside more that were featured in the newly-opened official website.

At the moment a western release has not been announced, but it’s likely to come at some point, considering that the franchise is very popular in North America and Europe, and the previous titles Yu-Gi-Oh! Legacy of the Duelist and Yu-Gi-Oh! Duel Links were also localized.