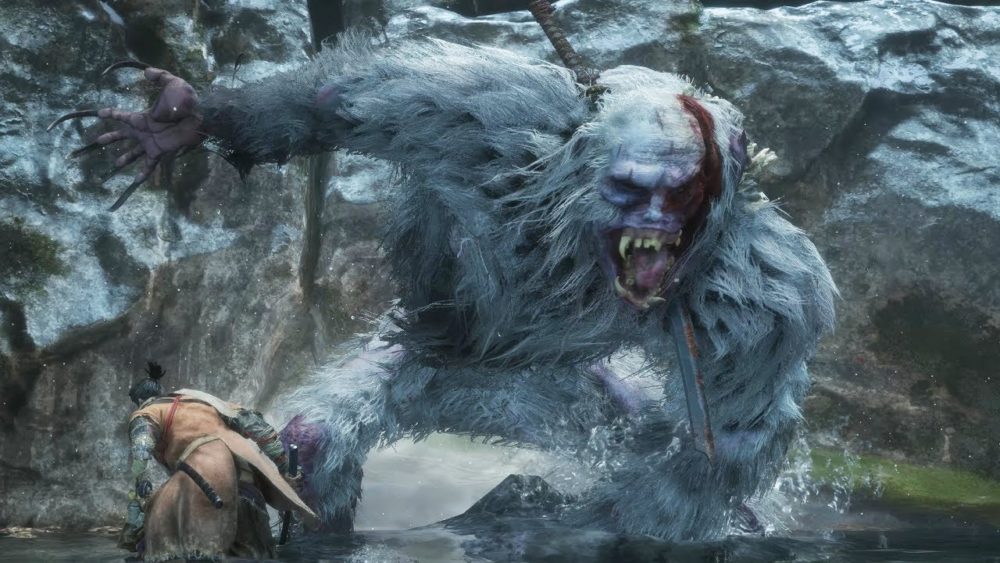 How to Beat the Guardian Ape Boss in Sekiro

Before going into the fight, make sure you’ve got the Shinobi’s Firecrackers equipped. The Guardian Ape is a beast-type enemy, which means that the Firecrackers will stun it.

In addition to that, you’ll also want to bring some antidotes with you, along with Pacifying Agents. These aren’t entirely necessary as most of the Guardian Ape’s moves are physical, but take them with you just in case.

During the first phase of this fight, the Guardian Ape has a few dangerous moves to look out for. He’ll rush towards you and do a belly flop, and this will be your chance to wait for him to stop thrashing around, then get in a few hits on his head.

In this phase, you’ll want to focus on hitting and running instead of deflecting his attacks. His patterns can be a little hard to read, and they deal too much Posture damage for deflecting to be worth it.

The Guardian Ape also has a sweeping Perilous Attack that you can jump over pretty easily. If you happen to be at his rear, he’ll occasionally release a cloud of poison gas. And when you have too much distance between you, he’ll throw his own poop at you to inflict poison.

The poop attack, in particular, is rather hard to dodge, so I recommend staying relatively close to him to try to bait out the belly flop attack.

You’ll want to use your Firecrackers pretty liberally in this phase as well, as they won’t be of any use in the next part of the fight. However, it’s worth noting that the Firecrackers will lose their potency if you use them consecutively.

With that in mind, let the Guardian Ape get one or two combos out of the way in between each round of Firecrackers you use. Keep wailing on his head and you’ll be able to stun him for a few seconds, allowing you to get even more hits in.

Phase 2 – How to Beat Guardian Ape in Sekiro

In this second phase, the Guardian Ape now has a sword and he also has much longer reach than before. The fight looks scary, but this phase is actually much easier to handle than the first one.

First off, he still has the sweeping Perilous Attack that you can easily jump over. However, he has a new Perilous Attack that emits a cloud of terror gas that will damage you and also increase your terror build-up. You can identify this move pretty easily whenever the kanji character appears, and the Guardian Ape is looking up with blood spilling out.

Back away from this move immediately and wait for it to wear off before going back in.

Just like in the first phase, you’ll also want to stay pretty close to the Guardian Ape. He has two patterns: one is a dive where he body slides toward you with a single sword slash. This can be deflected or guarded against easily.

His other pattern has him snaking around the ground with a four-hit combo string. When he starts snaking around, try to stand in front of him and deflect the attacks. If you manage to deflect the third hit, the Guardian Ape will rise up and do a slow overhead swing that’s extremely easy to deflect.

Deflect the overhead swing, and you’ll stun him for a few seconds, allowing you to deal some serious damage. This is going to be your main way of injuring the Guardian Ape.

Lastly, he also has a jumping attack where he leaps into the air and divebombs with a sword attack. This is also fairly easy to dodge if you just move to the side.

Stay close to the Guardian Ape to bait out his combo, deflect the first three hits, deflect the overhead swing, and you’re golden.

That’s all you need to know about how to beat the Guardian Ape in Sekiro. Be sure to check our Sekiro guide wiki for more tips and information on the game.