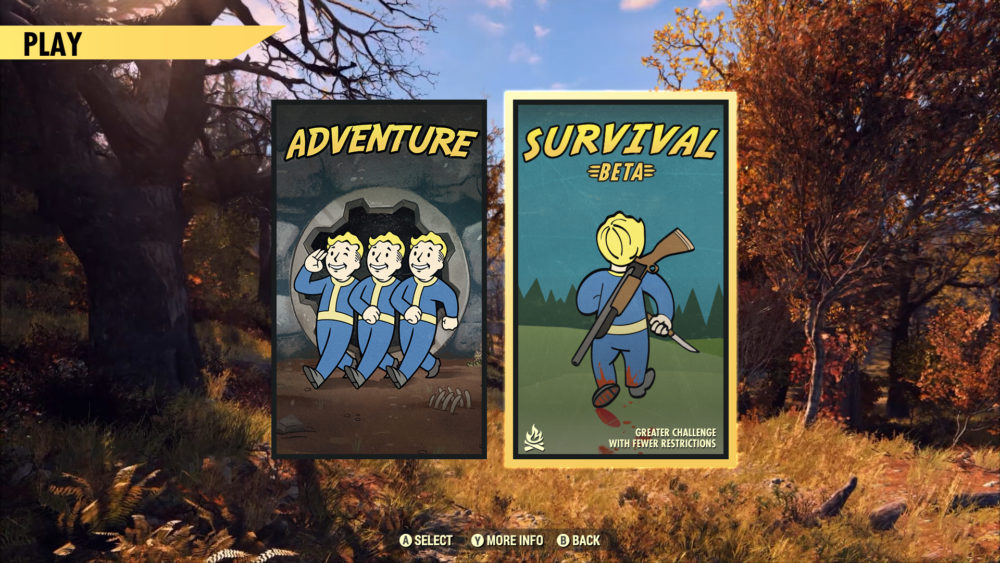 The beta version of Fallout 76’s new game mode goes live in today’s update, bringing with it “fewer restrictions and higher-stakes for Player vs. Player combat”.

The new “Survival Mode” offers “a more competitive and dangerous” way to enjoy Fallout 76 that will be completely separate from the old way of playing. This mode will remove the bite of PvP action from the original game, and shift it over to an arena of its own.

In addition to still being able to do all the usual Fallout 76 stuff (like questing, looting, and exploring), new features including scoreboards for stat tracking, legendary item rewards, and a bonus to all XP will also be included in the new PvP-focused way of playing. At the heart of Survival Mode is a long list of combat and balance changes, including the following highlights:

Bethesda has also removed some of the motivation behind PvP combat from its main game mode (along with changing the name). After today’s update, players will have the option of dropping their character into either “Adventure” or “Survival” mode instead of simply selecting “Play” on the main menu.

Along with the name change, “all incoming damage from players you are not hostile with (A.K.A. “slap” damage)” has been removed from the standard Fallout 76 experience. The intention is to greatly reduce “the effects of unwanted PVP on your Adventure Mode characters.”

You can view the full patch notes for today’s update on the Bethesda Game Studios blog, which also includes a host of bug fixes. You can also find Survival Mode highlighted in the recent trailer for Wild Appalachia— the wave of new updates arriving for the game this spring.