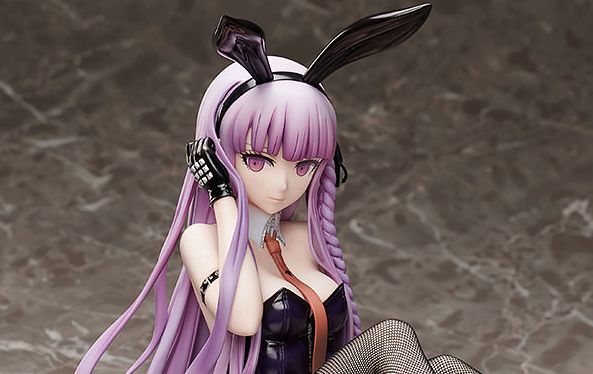 FREEing is making another gaming addition to its popular B-Style line of bunny-outfitted figures, and this time around it’s dedicated to Danganronpa: Trigger Happy Havoc.

The character portrayed is one of the most charming Rui Komatsuzaki ever designed, Kyoko Kirigiri. She is now available for pre-order at several retailers, including AmiAmi.

She comes in the traditionally massive 1/4 scale of the B-Style line, which means that she’s 226mm tall. That’s really big considering that she is sitting. The price is certainly proportional, at 21,500 yen, which translates into just south of $125.

The planned release window is rather far away, in January 2020. That being said, this kind of lead date isn’t uncommon in the Japanese figure market.

This “Ultimate Bunny Girl” figure is made with PVC and her stockings are actually made with realistic material. That’s another traditional feature of the B-Style line.

Danganronpa: Trigger Happy Havoc was originally released for PSP in Japan in 2010. Western fans finally got their first taste of it in 2014 for PS Vita. It was then launched for PC in 2016 and relaunched as part of the 1.2 Reload compilation in 2017. It’s also coming back this year within the Danganronpa Trilogy release for PS4.