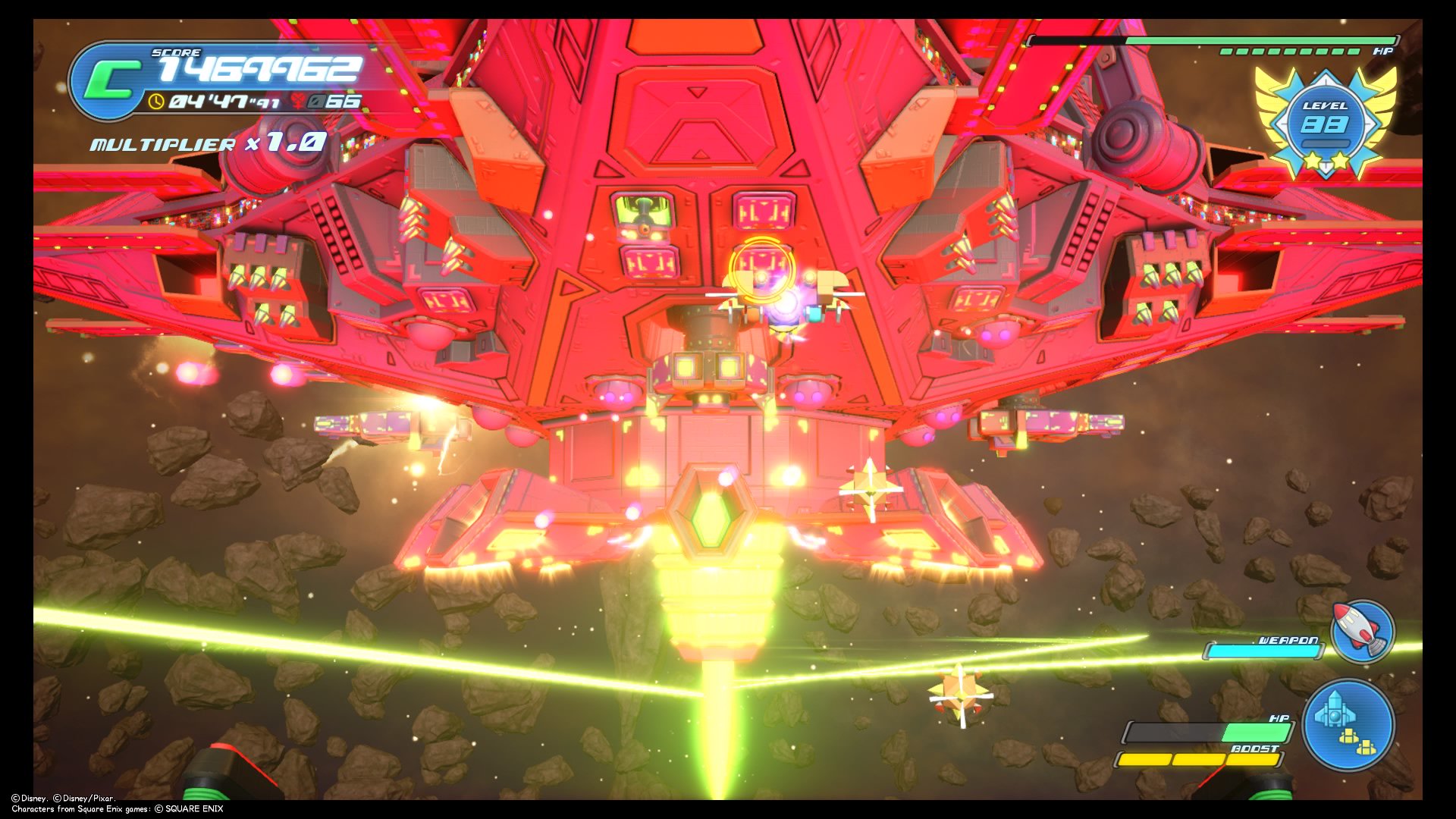 How to Beat the Omega Machina in Kingdom Hearts 3

If you’re wondering how to beat Omega Machina in Kingdom Hearts 3, you’re not alone.

The secret Gummi Ship boss fight poses a formidable challenge to even seasoned Kingdom Hearts 3 players. It can rain down constant death and destruction with its many components and armaments, and quickly rend a fully upgraded ship to ribbons.

Fortunately, there are some strategies that can be used to help you overcome the deadly dreadnaught. All of this, of course, starts with ensuring you’ve got the right ship for the job.

Getting the Right Ship to Beat Omega Machina

First and foremost, aim to have a ship that is at least as fast and powerful as the Highwind Peak.

This is the highest level of Highwind blueprint you can obtain while playing through the main portion of Kingdom Hearts 3, and even if you’re looking to use a different ship build, it serves as a nice example of what you’ll need to take on this boss.

Likewise, you’ll need to have gathered the components needed to build the Teeny Ship T-Highwind Peak. While you can use any type of Teeny Ship you’d like for this fight, the Peak has one of the better frameworks to build off for this strategy.

Next, edit your main ship in Kingdom Hearts 3 and make sure it has at least one Firaga G-02, One Blizzaga G-02, and one Thundaga/G. This will give you the bare minimum of weaponry needed to take down the Omega Machina, putting your offense near 700.

You’ll also need at least 200 speed. This can be achieved by equipping two Rocket/G’s and a Booster/G, or by equipping several Vernier/G’s and Thruster/G’s if you haven’t found them yet.

The rest of the ship’s build can be left up to your discretion, but it is recommended to have at least 500 HP for this fight.

After you have your main ship taken care of, it’s time to edit your Teeny Ship in Kingdom Hearts 3. As stated before, it’s best to use the T-Highwind Peak blueprint and use it as a foundation to build upon.

Swap out the Peak’s two forward facing weapon Gummies for a Thundara/G. Leave the rest of the ship as is. This should provide you with a Teeny Ship with 30 Speed, 164 Offense and 99 HP.

You’ll want to use this Teeny Ship design on both sides of your main ship too, so make sure you have the required amount of materials to make two copies. If you don’t, explore the different systems for treasure crystals and farm up the needed materials.

The last element to consider is the special weapon you should equip to your ship. While it really comes down to your own preference, the Dual Blasters are great damage dealers and recharge quickly, so use them if you’re not partial to any of the others.

This should provide you with a ship combination capable of taking down the Omega Machina in Kingdom Hearts 3. Equip your newly-designed ships and embark from the Keyblade Graveyard toward the top of the Pyramid.

Once the fight starts in Kingdom Hearts 3, focus on destroying the Omega Machina’s component’s first; namely, the pop-up turrets and the twin cannons.

Eliminating both will free up more room for you to maneuver, especially since the twin cannons constantly fire pink beams at the top half of the screen that can quickly deplete your health.

Stick to the bottom half of the screen and concentrate your fire on either a twin cannon or a patch of pop-up turrets on Omega Machina.

Hold down the X or A button for at least one second to ensure you’re targeting as many enemies as possible with your Thundara/G’s and Thundaga/G, and keep your ship moving at all times while making counter-clockwise rotations to throw off enemy fire.

Every so often, the main component of the Omega Machina will fire off missiles and multiple blue beams that will force you to move to the top of the screen to avoid them.

When this happens, look for the gap in the beams you can use to get back down to the bottom of the screen in Kingdom Hearts 3 and avoid damage from the twin cannons’ fire. At the same time, move the ship in circular motions to avoid the missiles.

After a few minutes, you should be able to take out all of the weapon components and be able to move onto the main component of Omega Machina. Concentrate your fire on the component’s face while also making wide counter-clockwise movements to avoid incoming fire.

It won’t take long before you destroy this component and move onto the next phase of this Gummi Ship fight in Kingdom Hearts 3.

Once you reach the second phase, the strategy you’ll need to use is largely the same as the first phase’s, except you’ll now need to stick to the top half of the screen to avoid the twin cannons’ beams.

Likewise, the Omega Machina’s main component will now fire constant yellow beams that can occasionally move upward across the screen.

Keep an eye out for the yellow beams and avoid them as necessary. Otherwise, rinse and repeat the strategy for the first phase and you’ll get to the third phase before long.

Once you reach the third phase, the Omega Machina will fire off a screen-filling volley of blue beam bursts.

While it may look intimidating at first, these can be easily avoided by moving counter-clockwise around the screen, with some smaller counter-clockwise circle rotations made to avoid the rounder shots that home in on you.

Keep up this movement pattern while also holding down the X or A button to lock on to the Omega Machina’s main component with Thundara/G and Thundaga/G fire.

After a minute or two, you’ll move onto the final phase of the fight. Getting past this one is easy, as the Omega Machina only has one laser grid attack that can be easily avoided.

Keep this up for a minute or so and you’ll have bested the Omega Machina in Kingdom Hearts 3.