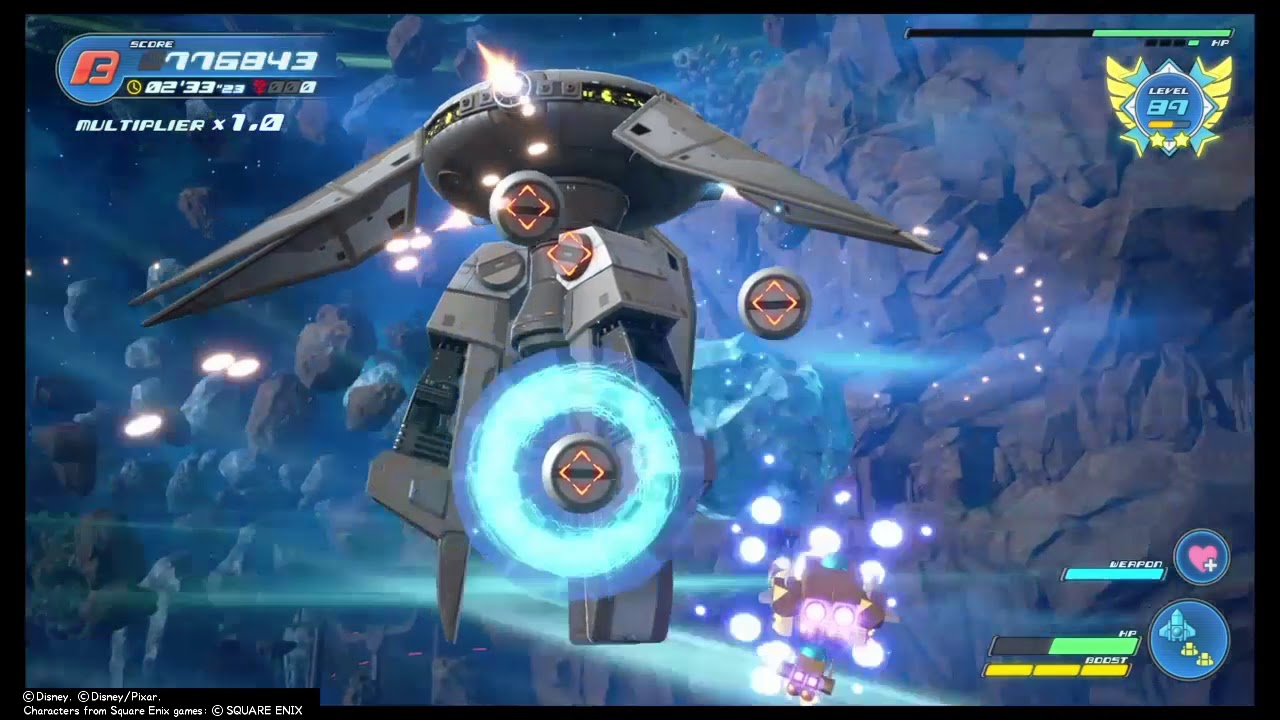 How to Beat the Schwarzgeist in Kingdom Hearts 3

If you’re struggling to figure out how to beat the Schwarzgeist in Kingdom Hearts 3, you’re not alone.

Only accessible after players craft a Gummi ship fast enough to break through a cosmic vortex, the Schwarzgeist is the be-all and end-all of Gummi Ship boss fights.

Armed with regenerating barriers, health-zapping death rays and multiple forms to deal with, it can prove nearly insurmountable if you don’t know how to properly take it on.

To that end, we’ve done the leg work to provide you with a strategy that’ll increase your chances of taking the hidden dreadnaught down.

While the Schwarzgeist initially only has a ship speed requirement to fight it, there are several specific specs your ship will need to have if you want to stand a chance against it.

More specifically, you’ll need to craft a main ship with at least 500 HP, 650 or more Offense, and 140 or higher speed, along with two Teeny Ships that push your Speed up to or over 200.

The easiest way to do this is to start with the Highland Peak Gummi Ship and T-Highwind Peak blueprints, and work from there.

The Peak is the highest tier of the Highwind line of ships and Teeny Ships, so you’ll have to play through the majority of the game before you can unlock it.

While you’re welcome to use whichever ship build you like, the Highland Peak will make it far easier to meet the requirements needed for this strategy to work, and even fulfills some of the requirements right out of the gate.

Modifying Your Gummi Ship to Take on the Schwarzgeist

Once you have the Highwind Peak blueprint, you can start modifying it to meet the afore mentioned requirements.

The health requirement should already be met, as the Peak starts out with 537 HP. As for Offense, you can bulk up your attacking power quickly by swapping out the ship’s Thunder/G blocks and yellow blaster on the undercroft for one Thundaga/G block.

This will put your Offense at 694 and should give you plenty enough firepower for the fight with the Schwarzgeist.

Lastly, you’ll need to increase your Speed to 140 or more. This can be done by swapping out the Peak’s Vernier/G blocks for Rocket/G blocks, which when added with the Peak’s pre-installed Booster/G puts the ship’s speed at 142.

Modifying Your Teeny Ships to Take on the Schwarzgeist

Next, you’ll want to modify the Teeny ships you’ll be taking into the Schwarzgeist fight.

As stated earlier, the best template to use is the T-Highwind Peak. These ships will push you over the required speed threshold and increase your overall health by 198 points without any modifications.

To give yourself one last boost to offense though, you’ll want to swap out the ship’s two front blasters for a Thundaga/G block. This will put the ship’s offense at 164, and if you equip one on each side of your main ship you’ll be well armed for the fight ahead.

Which Load Out to Use for the Schwarzgeist Boss Fight

Once you’ve modified both your Main Ship and Teeny Ship, you’re ready to set up your load out for the fight.

Select your modified Highland Peak and equip your modified version of the T-Highwind Peak on both sides of the ship. Once you do, your final stats should be 202 Speed, 735 HP and 1,022 Offense.

You’ll also need to select a special weapon to use during the fight, though this is more up to player preference than anything else.

If you want to deal as much damage as possible, take the Twin Shot or Firestorm along. Both can deal a nice chunk of damage to the Schwarzgeist and recharge quickly.

On the other hand, if you want to play it safe and heal up damage you take, select the Repair Kit.

Once you’ve got your ship and weapons selected, embark and head towards the cosmos vortex at the center of the Misty Stream system.

Once the fight starts, the Schwarzgeist will have three basic attacks it’ll try to hit you with: A rain of orange beams, a storm of tracking red beams, and a barrage of homing missiles.

Any of these attacks can kill you quickly if you aren’t careful, so you’ll need to avoid them as best you can throughout the fight.

When the Schwarzgeist sets up to launch its orange beams, position yourself just off to the left or right of the center of the screen. This should put you out of range of the attack, and you can continue to hammer it with Thundaga fire until the attack subsides.

Next, it will try to hit you with either red beams or missiles. If it uses the red beams, you can avoid them by circling round the screen in clockwise or counter-clockwise rotations. Just keep moving, or else you’ll suffer massive damage.

As for the missiles, you can either dodge them by rotating the ship in counter-clockwise rotations or sweep across the bottom of the screen while firing continuously to destroy them.

The latter strategy comes with the benefit of causing damage to the main ship, but can also leave you with a chunk of health missing if a missile gets through.

After depleting the Schwarzgeist’s health down to 75 percent or lower, it will begin producing shield components to intercept your attacks.

It can produce a maximum of four, with each subsequent shield blocking more and more of your blasts. These shields can also fire off blue lasers that can deplete your health quickly, with bursts of two lasers flying at you in rapid succession.

Worse yet, they’re endlessly reproduced, so even if you destroy them, another will pop up after 10 seconds or so.

As such, you’ll want to try and destroy them all at the same time, or as close to the destruction of the others as possible.

To do this, rotate around the screen in counter-clockwise rotations while holding down the X or A button for at least one second to lock on to all of them with your Thundaga/G.

This should eliminate most or all of them around the same time. Once they’re gone, unload on the main ship with your base weapons, and special weapon if applicable, until the shields start to respawn.

While you’re doing this, the main ship will continue using the same attacks from the first phase. Use the same strategies as in the first phase to avoid them, except for the orange beam attack.

When this attack is used, you’ll need to move your ship up and down in the safe space between the orange beams to avoid blue beam blasts from any shields that are on the field.

Once you’ve depleted the main ship’s health bar, the Schwarzgeist will move into its final phase with the reveal of a smaller, deadlier ship.

The ship will dart around the battlefield before coming to a full stop with its black pilot dome exposed. After about one second, it will charge at you with a homing attack.

Keep locking onto and firing at it with Thundaga/G attacks while it’s darting around. When it lines up for a charging attack, start to rotate around the screen in counter-clockwise circles.

After it returns from its charging attack, it will dart around the screen again before launching tracking red beam attacks at you. Just like before, rotate around the screen in counter-clockwise circles to avoid getting hit.

Keep hammering it with Thundaga/G shots in-between and during attacks, and before long you’ll have bested the Schwarzgeist.

Hopefully this helps you figure out how to beat the Schwarzgeist in Kingdom Hearts 3. For more on the game, check out our Kingdom Hearts 3 guide wiki for tips, tricks and secrets galore.