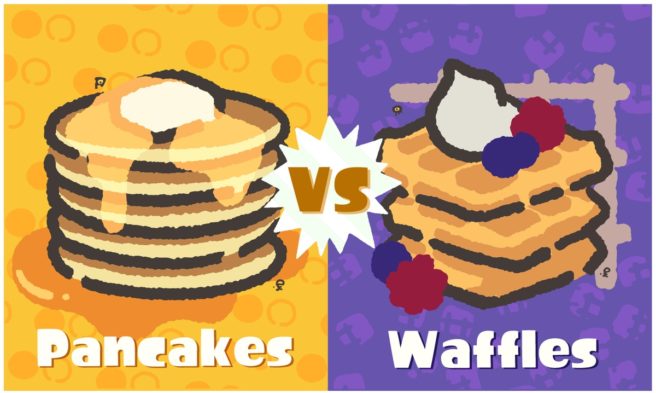 Splatoon 2 is taking its upcoming Splatfest to the breakfast table, by pitting the two biggest rivals in morning foods against each other, pancakes vs waffles.

The Nintendo Versus Twitter page announced that the next Splatoon 2 Splatfest would begin on Feb 8 at 8 PM PT.  The Turf War will be a 24 hr battle between Team Pancakes and Team Waffles to see who will become the ultimate breakfast champion.

While the choice may seem simple (*cough* *cough* pancakes), people have already begun the divide on which breakfast food reigns supreme. The responses are pretty great.

Of course, several have mentioned that Nintendo is missing a fan favorite breakfast food from its options.

And then there are those who just haven’t been able to make up their minds.

This, of course, is the typical fun that comes out of Splatoon 2’s Splatfest announcements. And if you really wanna settle the breakfast war then you will have to log on and prove your team is the best.

A Splatfest is a limited time event that Splatoon 2 hosts quite often. Generally, the event will pit two common items or foods against each other and allow players to choose a side. Leading up to the showdown players will receive an exclusive shirt for their avatar that allows them to show off their team with pride.

It all culminates down to the main event when the two rival teams can compete in the game’s online Turf Wars mode to earn points for their respective team. When the event is over a winning team is declared and all who participated on the winning team will receive in-game rewards to use for their character.

These events have become quite anticipated by the Splatoon 2 fan base and have been around since the series first installment was released on the WiiU. Some of the more memorable Splatfest include Octolings vs Squids and the very controversial front roll vs back roll toilet paper debate.

You can participate in the pancakes vs waffles Splatfest starting Feb. 8. Splatoon 2 is available now exclusively on Nintendo Switch.