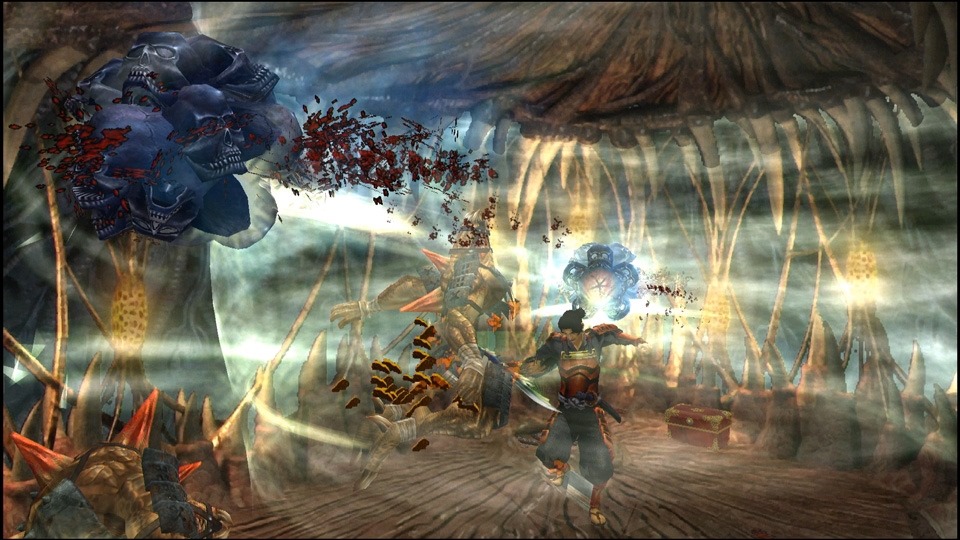 How to Get Through the Dark Realm in Onimusha Warlords

If you’ve been struggling to figure our how to get through the Dark Realm in Onimusha Warlords, we’re here to help with a comprehensive guide on strategies and techniques to implement.

Easily one of, if not the most challenging parts of Onimusha: Warlords Remastered, the Dark Realm tasks players with overcoming a gauntlet of fights with demons and enemies from across the game.

It gets progressively tougher as you advance too, throwing bigger and stronger enemies at you in greater and greater numbers as you advance deeper into the challenge.

While the area is entirely optional, it is necessary to overcome for a platinum trophy. Both overcoming the gauntlet and obtaining several pieces of Fluorite hidden in its depths lead to trophies which can’t be obtained any other way.

As such, we’ve compiled a list of factors and strategies to keep in mind as you make your way deeper into the Dark Realm. They still won’t give you a 100 percent success rate, but they will increase your rate of survival exponentially.

Have As Many Healing Items as Possible Stocked

A valuable commodity in Onimusha: Warlords Remastered, healing items like herbs and medicine are a must-have when taking on the Dark Realm.

While enemies may drop health orbs for you to absorb, they’re few and far between, especially in deeper levels. As such, having a few items handy to use in an emergency is key to completing the challenge.

If possible, try to upgrade any herbs you have as well. The added benefits they’ll provide will only bolster your chances of coming out on top.

While they may not be stated outright, each demon in Onimusha: Warlords Remastered is weak against certain weapons and attacks over others.

For example, mid-sized red swordsmen can be torn to shreds by lightning attacks, while the rolling spike monsters can be done in more quickly with the flame orb’s burning heavy attacks.

Utilizing these weaknesses to eliminate enemies more quickly is key to getting past the more hectic lower levels, so make sure to experiment and learn which enemies are weak to what before you go for the lowest levels.

Knowing when to use the limited number of magical attacks you’re provided with in Onimusha: Warlords is crucial to getting through the entirety of the Dark Realm.

Like with your health, you’ll be limited to absorbing magical orbs from enemies once you’ve depleted your meter. Magical orb drops are rare though, and so if you use your magical attacks too early, you could be limited to base attacks in later levels.

While it may be tempting to wipe out each enemy as quickly as possible with a blast of magic, hold onto them unless you’re faced with too many enemies to handle or an especially strong foe.

This way you can conserve the attacks as long as possible, saving them for the ideal situation.

Keep Your Distance Whenever Possible

Though it may seem counter-intuitive, It’s crucial to keep at least some distance between yourself and the enemies in each stage. Being too close can quickly lead to you being surrounded, resulting in a barrage of hits that leave your health bar in tatters.

Try your best to stay on the edge of your striking range so that you can dodge or block accordingly. This will ensure that you can stay in control of your position in regards to the enemies around you.

Don’t Be Afraid to Bail Out

As mentioned earlier, the Dark Realm is an optional challenge and not integral to completing Onimusha: Warlords’ story. As such, it’s designed to allow players to leave after completing each stage to refuel, re-evaluate strategies and so forth.

If you feel like your run isn’t going as you’d hoped, or you just want to grind a bit more before taking on another level, don’t be afraid to bail out. Doing so could mean the difference between cashing in a ton of souls and losing it all to a dumb mistake.