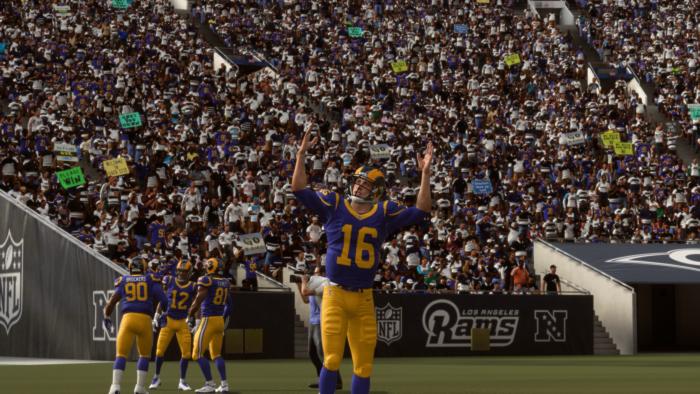 Madden NFL 19 predicts that the Los Angeles Rams will defeat the New England Patriots with a score of 30 to 27 at Super Bowl LIII this Sunday.

In a simulation game between the two teams, the Patriots would lead in the first half with 17-3 with a three-yard run by running back Sony Michel, a touchdown by wide receiver Julian Edelman, and a 42-yard field goal from Stephen Gostkowski.

The Rams would take it back in the second half with a 46-yard touchdown pass to receiver Robert Woods, a 21-yard field goal by kicker Greg Zuerlein, a 26-yard touchdown pass to wide receiver Josh Reynolds, a 53-yard field goal by Zuerlein, and a five-yard run by running back Todd Gurley for the championship win with a score of 30 to 27. Rams defensive tackle Aaron Donald would win the MVP award with a Super Bowl record of four sacks.

Madden NFL publisher Electronic Arts uses the latest installment of the franchise to predict the Super Bowl winner in a CPU vs. CPU game each year. The previous two games predicted the Patriots would win the big game and was correct at 2017’s Super Bowl LI, but wrong with a Philadelphia Eagles win at 2018’s Super Bowl LII.

EA has been using its games to predict the Super Bowl winners since Madden NFL 2004. Check out the rest of the list for correct and incorrect predictions throughout the years.

Madden NFL 19 is currently available for PlayStation 4, Xbox One, and Origin on PC. Madden NFL 19: Ultimate Super Bowl Edition is also on sale for all platforms for the duration of Super Bowl weekend this Sunday, Feb. 6.