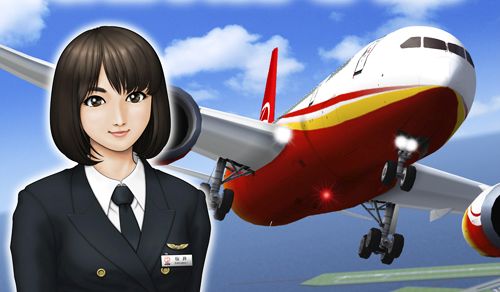 Japan loves to put storytelling and cute anime-like faces into games that normally wouldn’t have any, and they often come with anime-style imagery and characters. You’d think that games as “serious” as flight simulators would be immune from this trend, but they aren’t anymore. Enter Pilot Story: 787 Airline Operation.

The game, coming from Kyoto-based studio TechnoBrain, puts the player in control of a brand new Boeing 787 Dreamliner, and it does so with all the details and technical depth that flight simmers usually love, but it adds a typically Japanese flare.

It includes full voice acting and lets the player interact with a crew with names, faces (obviously designed in anime/manga style), and backstories. It even comes with Japanese and English voices for those who prefer a better degree of realism. English is usually used in aviation over the radio even in Japan.

So instead of having impersonal chatter with imaginary crew members, you’ll meet 51-year-old veteran Captain Tadashi Kanda who loves Cycling and is afraid of high places, cute 27-year-old First Officer Yukina Sakurai, who is the airline’s first female pilot and shoulders the expectations of many, and 29 year-old Flight Attendant Aika Aoyama, who loves yoga and flamenco.

The game even features the typical chat windows with portraits that we’re used to seeing in visual novels.

While the controls and technical aspects of the title appear to be akin to what you’ll find in other rather advanced flight simulators, TechnoBrain devised a tutorial system that guides beginners through the complex operations required to control a 787 from the pre-flight briefing to parking at the destination gate.

This, paired with the interaction with the rest of the crew, aims to make Pilot Story: 787 Airline Operation one of the most accessible flight simulators ever for novices.

The game will release in Japan on Feb. 22 exclusively for PC. I’m not gonna lie: If TechnoBrain ever considers localizing it, I’ll buy it day one.

You can check out a trailer, the box art, and some screenshots below. If you’d rather have something more gamey, you can also enjoy the latest trailer of Ace Combat 7: Skies Unknown.