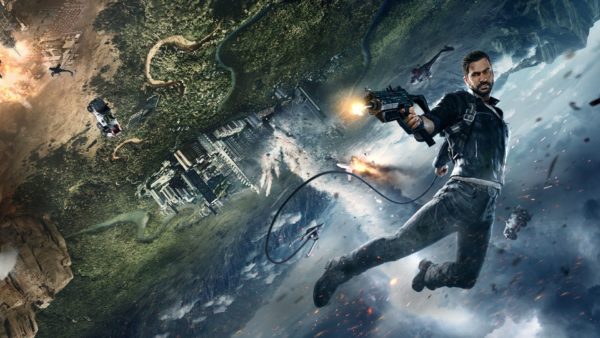 Just Cause 4 on PlayStation 4 Pro

Avalanche Studios’ Just Cause games have always been about granting you the freedom to cause chaos in a huge sandbox. Not only in the scoring system that shares the name, but also in how the impressive physics engine allows for all manner of hilarious slapstick action.

While undeniably making for a fun experience, that focus has seen other elements of the series fall behind what we now expect from open-world action titles. Just Cause 4 is much of the same when it comes to technical performance, and the new additions do very little to shake up the gameplay formula.

Just Cause 4 sees Rico Rodriquez make his way to Solis, a fictional South American location, to take on The Black Hand. Led by Gabriela Morales, The Black Hand is developing a machine that creates extreme weather in seconds and they’re testing it on the people of Solis.

To stop them, Rico must take back Solis sector by sector, with the help of his trusty grappling hook and the Army of Chaos he’s building.

The story’s pretty standard action stuff, with Rico’s army getting more and more powerful as the bad guy screams from his office at the top of his tower. The acting’s definitely a step up from the previous game, but there’s very little in the way of surprises.

That being said, Just Cause 4’s mission structure, which has you tackle missions in enemy controlled locations, advancing through the map as you succeed, is a fun change of approach.

It’s like Far Cry 5 in a way, with the Army of Chaos needing to tackle three main mission strands, called Operations, each of which takes place in a different part of Solis and focuses on a different type of extreme weather. Breaking the world down into sectors takes away a little bit of the freedom, but you get a satisfying feeling of progression from advancing your front line.

The missions themselves have you tackle increasingly powerful enemy bases. Some of them are sprawling, super bases that are full of anti-air turrets, and you need to do whatever’s needed to shut down whatever operation it exists for.

As you complete more, you unlock the chance to tackle the main missions, which are the highlight of Just Cause 4’s story. If you remember Rico riding an incoming nuke in Just Cause 2, you’ll know exactly what to expect here when the hero’s faced by a rampaging tornado, and it makes for some brilliant set pieces.

Adding the signature Just Cause 4 gameplay into those ridiculous situations makes for some hilarious and wonderfully enjoyable moments. Whether you want to jump into a helicopter and attack from above or slingshot your way along the ground, utilizing Rico’s impressively varied arsenal, anything’s an option.

The gunplay itself is surprisingly solid, with every weapon having a weight to them that feels satisfying, and since Rico has more health than any other action hero in history, you’re able to experiment without having to be too cautious. You’re quick, powerful, and can take a beating better than anyone else.

Once you get to grips with Rico’s wingsuit, grappling hook, and parachute, a lot more opportunities open themselves up, too. Grappling onto an enemy chopper, ripping the pilot from his seat, before jumping out and plummeting towards another enemy on the ground is satisfying every single time.

With the ability to call in new weapons and vehicles in a matter of seconds, it’s also made significantly easier for you. The gear available to you and Rico’s sheer power allow you to take full advantage of the game’s generous sandbox nature.

While experimentation is certainly possible, it’s disappointing that the missions you undertake don’t promote that, and there’s nothing of note that’s different to Just Cause 3.

Most missions have the same aims – blow this generator up, press that button, or protect this object. It goes even further than that, though, with exactly the same missions happening three or more times during the course of the story. The location is the only thing that changes and it feels very repetitive towards the end of the game.

You’ll still have a lot of fun doing what the missions ask of you, but Just Cause 4 is in no way subtle about re-using mission types.

The two main new features, extreme weather and grappling hook mods, aren’t taken advantage of in the story missions either. Lightning storms, tornados, and sandstorms are used more for impressive cutscene moments than they are for the gameplay, and there’s almost no reason to use the new booster and lifter grappling hooks.

The standard retractor one is more than sufficient for every objective. If anything, its usefulness for quick traversal makes it the best option, so since the game doesn’t require you use the others, why would you?

Seeing a tornado ripping through Solis is an incredible sight. Everything around it is sucked into it as it moves across the terrain. It’s a real testament to the game’s physics engine, but both the extreme weather and the playful grappling hook mods seem like afterthoughts that only serve people looking to make silly clips of what’s possible. The new features don’t service Just Cause 4’s moment to moment gameplay at all.

The extreme weather effects look excellent, and Solis is generally a huge and varied setting, but the most frustrating thing about Just Cause 4 is how inconsistent it is from a presentation and technical standpoint.

From the skies above, Solis looks lush and beautiful, and the game’s physics engine makes for some spectacular explosions but it feels like all the power of your system is being used on those aspects.

Looking closely at the world, you’ll see a lot of pop-in, poor textures, and strange animations. The cut-scenes are the biggest offender, though. Looking almost like they’ve been ripped straight from the first game that launched in 2006, the characters look like they’re made of plastic and the lighting effects leave a strange shine in certain places. The 4K upgrade of the PS4 Pro does little to help, either.

Coming off the back of other open world sandboxes that have launched in the last few months, many of which are far more ambitious than Avalanche’s game, Just Cause 4’s below-par visuals are more disappointing than they may have been in previous titles.

While the issues certainly aren’t as pronounced as they were in Just Cause 3, Rico’s new adventure also suffers from its fair share of technical issues. The aforementioned pop-in is complimented by semi-frequent frame rate issues, an unruly camera, and even a few hard crashes. As you’d expect, the issues are more prominent in particular action-heavy moments, but they’re off-putting, especially when other aspects impress.

Extreme weather is a visually impressive addition to the already insane world of Just Cause. Playing with possibilities of the physics engine as you zip across Solis, trying to take down yet another dictator, is as much fun as ever, but that ‘more of the same’ sentiment is present everywhere in Just Cause 4, from the technical issues to the repetitive mission structure and generic story.