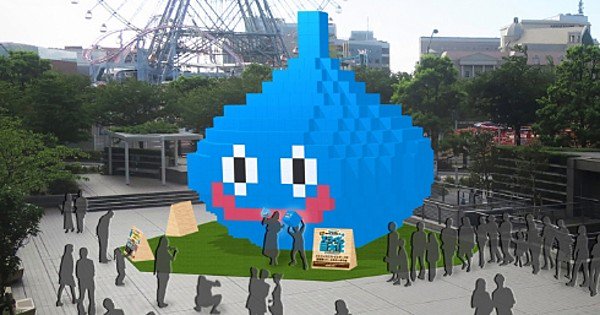 The Japanese release of Dragon Quest Builders 2 is just around the corner, and one city in particular is set to celebrate the series’ latest entry in record setting style.

As a promotional campaign for the sequel’s release, the city of Yokohama will host the building and display of the world’s largest Slime figure. Standing at 8 meters tall, it will be constructed from blocks for a pixilated look and aesthetic of a video game brought into real life.

The statue will be located in the Queen’s Square of Yokohama’s Queen Park, where locals and tourists alike can snap a pic with the record setting attraction. It will remain up from Dragon Quest Builders 2’s launch on Dec. 20 through Dec. 24.

Though no firm release date has been given at this time, Dragon Quest Builders 2 currently has a tentative Western release window of 2019. The game sees players take the role of a builder as an evil organization attempts to lay the world to ruin.

Intent on stopping any who stand in their way, they throw the player in prison before events leave the player stranded on a deserted island. It is here that they’ll gain the materials and drive they need to stop the nefarious group’s plan and rebuild the world from scratch once again.

The statue’s construction also comes at a time when the Dragon Quest series is at a notable peak in popularity worldwide. Dragon Quest XI: Echoes of an Elusive Age has enjoyed widespread acclaim and support after its western release in Sept. 2018, with sales now topping 4 million worldwide.

For more on all things Dragon Quest, check out the latest screen shots released for Builders 2 as well as the recent tease that a new entry in the Dragon Quest monster series is in development for consoles.