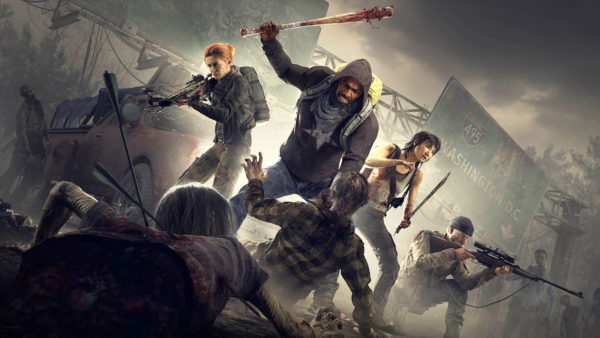 Overkill’s The Walking Dead on PC

The Walking Dead is one of the most popular franchises in mainstream pop culture right now. Yet, aside from Telltale’s (mostly) excellent episodic series, we’ve yet to actually play a competent action game set in this grisly universe. Overkill Software and Starbreeze Studios are looking to change that with Overkill’s The Walking Dead, a co-operative shooter game.

I’ll cut to the chase; Overkill’s The Walking Dead is indeed the best TWD action game you can play right now, but even that isn’t saying much, when you consider that 2013’s Survival Instinct hasn’t exactly set the bar very high.

Similar to games like Left 4 Dead and Payday 2, Overkill’s The Walking Dead features a mission-based structure where you’ll explore different levels with three other players. The catch here is that you can’t play solo and fill out your team with three AI companions; you have to play with other people, or be prepared to fail repeatedly if you choose to go it alone.

Thankfully, the game itself is actually kinda fun when you’ve got people to play with. The levels are mostly well-designed, interspersed with short puzzles you’ll have to solve in order to progress. Most of the obstacles are rather repetitive and samey, usually requiring you to find some materials to power up a generator so you can open some door. But every now and then, you might have to figure out a code sequence for a gate, and your team will have to work together to make sure you’re flipping the right switches in the right order. It’s a small touch, but it helps to break up some of the game’s monotony, and it can be fun to play a mission blind and figure things out on the fly.

The interesting thing about Overkill’s The Walking Dead is that, despite it being touted as a co-operative shooter, you won’t do that much shooting at all. There’s a heavy emphasis on melee combat and being as stealthy as possible. Aside from the base defense missions, you’ll see a sound meter on the top of your screen, indicating how much noise you’re making. There are three sound tiers, and as it goes up, the level will spawn even more zombie hordes to come harass you.

Because of this, you’ll want to rely more on using your melee weapons to hack and slash your way through, and only save your guns for emergencies. It’s a cool concept in theory, but it buckles when put into practice. For starters, melee combat isn’t exactly very riveting. Half the time you’ll be mashing left-click, then pausing as you wait for your stamina to regenerate, then mash left-click again. Every now and then, a zombie might grab you from behind, and you’ll have to struggle to break free.

Not only that, you’ll also be coming up against human enemies in Overkill’s The Walking Dead. The story, if you can even call it that, centers around your faction’s rivalry with another deadly group called the Family. These are hostile humans who will fire at you with guns, which raises the sound meter.

Now, this wouldn’t be so terrible if the game actually had good stealth mechanics, but it doesn’t. The sight lines and enemy AI awareness feel wonky and harsh, making it difficult to actually sneak through a level and take enemies out silently. The human enemies don’t have suppressors on their weapons either, which means that once they spot you, you can expect the sound meter to shoot up immediately. How the Family survived this long by recklessly firing their guns with no suppressors baffles me, but there we go.

The human AI is also pretty robotic most of the time, particularly during base defense missions, where you’ll have to set up traps and defend your base from waves of enemies. The human AI would often bumble around clumsily, and just flood in, shooting with seemingly no purpose at all. It’s funny at first, but it becomes grating later on, particularly as you start going up against the more heavily armed military-type soldiers.

It’s the little things like these that make Overkill’s The Walking Dead a bit of a frustrating game to play. Missions are very lengthy, most of them averaging out between 40 minutes to an hour. There are no checkpoints either, which means that once your entire team goes down, you’ll have to restart the level, which makes it a pain. And then there are other little nitpicks like having to return to camp to collect mission rewards, but you can’t customize your weapons or loadout there – you can only do that when you’re back at the main menu. What even is the point of the base camp then?

That said, when you really get into the game and start to learn its systems, it can be fun. The gunplay is smooth for the most part, and as you level up, you’ll unlock more weapons to experiment with, and mods to help strengthen your loadout even further.

Over the course of my playthrough, I also began to grow attached to the generic cast of characters. Not for their personalities of course, because they have none, but for their distinct skill sets. At the start of the game, you’ll only have access to four survivors, but you’ll unlock more as you play through the story. Each survivor fills a very specific role; for instance, Maya is a support character who can provide healing for the team, while Heather is more of a stealthy ranger who’s proficient with the silent crossbow.

There are separate skill trees for each survivor as well, allowing you to improve their survivability and other combat proficiency. Outside of that, mission completion also rewards you with resources that can be used to upgrade your camp, which in turn give you access to different tools to use. These tools are one of the most compelling parts of Overkill’s The Walking Dead, as they allow you to approach missions in different ways. The wire cutter can unlock small shortcuts during levels, allowing you to bypass a zombie horde, while the chem kit can be used to sabotage traps.

Arguably the biggest flaw with Overkill’s The Walking Dead is just how generic and bland it feels. With a popular brand like The Walking Dead, you’d expect there to be a bit more flair or pizazz when it comes to world-building and characterization, but there’s nothing like that here. What we’ve got here instead is a decent co-operative shooter game that’s best played with three other friends, and could probably do with a few patches to help iron out its jankiness. If you can stomach the game’s full price at launch, and you’ve got a team to play with, you’ll likely have a fun time.