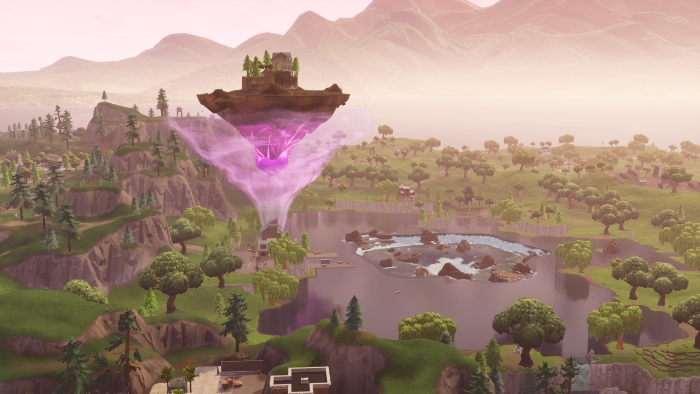 Fortnite: Battle Royale held an event within the game today to mark the end of the Fortnitemares Halloween event, causing the cube to explode and change the game’s map.

Players gathered around the cube’s location at Leaky Lake at 1 p.m. ET today to witness the event, where the cube exploded into pure light that filled players’ screens. Players were then transported to a heaven-like atmosphere and floating in seemingly nothingness.

Crystallized butterflies then surrounded players in the space, until being transported once again back into the game’s map. The event had changed the Leaky Lake into less of a giant lake now with several land masses populating the waters.

In case anyone missed the fortnite event, here ya go. pic.twitter.com/1G7dZCiqdN

The event also added “Lil’ Kev” challenges for players to earn the Lil Kev Back Bling until Sunday, Nov. 11. The community had affectionately named the cube “Kevin” since its inception.

Epic Games first teased the in-game event last Thursday alongside the 6.21 patch notes. On Saturday, players had noticed that the cube had started to break and drip its liquid down the hole of Leaky Lake continuously.

The cube had been part of the Fortnite: Battle Royale map in many ways since August during the game’s fifth in-game season. After travelling the map on its own during Season 5, it dissolved into Loot Lake, now known as Leaky Lake, and lifted the island out of the ground before breaking into three pieces after also moving around the map.

The Fortnitemares event is still ongoing for the game’s cooperative Save the World mode, allowing players to earn themed weapons and characters by completing objectives in a spooky swamp area with haunted mansions.