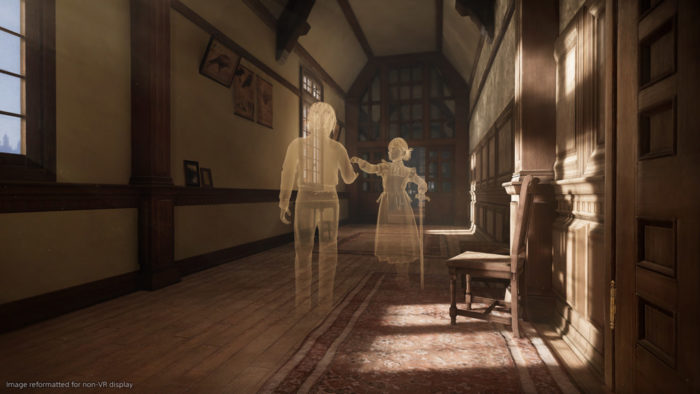 Shrouded in mystery since its reveal during the post-show of Sony’s E3 conference, it was difficult to know what to expect from Deracine. It was clearly a departure from what’s expected from the minds of From Software, Sony’s Japan Studio, and Hidetaka Miyazaki, who have been focused on the likes of Bloodborne and Dark Souls in recent years, but it was difficult to ascertain exactly what kind of experience Deracine was.

Calling Deracine a departure from the Miyazaki norm would be quite the understatement, though. What we have is a narrative-focused VR title that’s very much in the mould of old-school adventure games.

You play as a faerie who’s summoned by a young girl in a secluded boarding school, and attempt to prove your existence by building relationships with them and interacting with them from the world where time stands still.

You move between time periods, usually just days or months apart, learning more about the school, its history, and the students that live there. In each epoch, you explore the grounds, with different areas being open in each one, interacting with beads of light that tell a story and with the students’ belongings as they ask you to do things to prove your presence.

Using the required PS Move Controllers, you move between set positions in the world, rather than moving freely, and are in close quarters with the students. While exploring each chapter is the initial objective, each one has a task required of you before you move on, and this is where Deracine’s adventure game influences become obvious.

Some objects, albeit disappointingly fewer than your average exploration-focused game, can be interacted with as you explore. Some are there to provide context to the world, while some have a purpose and are added to your inventory. Many of them can be used as part of an interaction, or in conjunction with another object, to help with the completion of your objective.

One item leads to another and much of your time is spent working out what each item does, or where it is needed. At times, this can make the interactions like puzzles, but in true classic adventure game fashion, the design leads to a lot of aimless wandering and trial and error.

Solutions are rarely the obvious ones, so rather than making your way through the story at a steady pace, you’re likely to be running back and forth between important locations, trying to make use of whatever you’ve found. There are some standout and enjoyable moments that make the most of head-tracking and your ability to make your presence known to the students, but it also makes for some downright confusing moments, especially the opening chapters and final moments —both of which are slow, expansive, and lack direction.

Exploration is a key part of Deracine, but so is immersion and interaction with the students. Frustratingly rushing though the school, looking for that last connection, removes you from the beautiful world and makes the students the lifeless mannequins they’re often presented as. Both the adventure game structure, and inconsistent story presentation make playing Deracine feel too much like you’re interacting with a puzzle or painting, rather than a living world to be immersed in.

It must be said, however, that Deracine’s world is beautiful. The superb visuals effects interact with your hands and the other characters, offering some connection; the students, when they’re fully animated, are incredibly lifelike and move with your position in mind, and the school and its grounds are detailed to a level beyond anything else available for Sony’s headset. At times, it looks phenomenal, with virtual reality and the Move Controllers being used in unique ways.

The music is great, too. The orchestral score adds some emotional weight to the few dramatic moments, as well as to the serenity and beauty of simple exploration.

It’s a shame, then, that Deracine’s story lacks surprise or emotion. It’s an often charming tale that’s punctuated by the students’ wonder and the folklore-inspired moments, but it lacks any moment or feature that connects you to the children or their own adventure.

Aside from their visual distinctions, the gang of inquisitive students are difficult to differentiate. That may be down to how heavily Deracine leans on the fairytale nature of the story. Every boy and girl you meet is enthusiastic, innocent, and inquisitive. The way they act is often without emotion, and that bleeds into the story, removing much of the possible tension.

Much of it is to do with how the story is told. Learning about the children through memories and moments frozen in time is an interesting idea, but you interact with glowing orbs and still, ghost-like figures more often than the children themselves, and they’re little more than audio logs. It’s difficult to feel any connection to the students through these interactions, since, in these situations, you’re not really interacting with them at all.

Deracine does speed up about halfway through, kicking the magical story into gear through more frequent interaction, extended locations, and clear direction but it slows down again before the finale with the return of exploration puzzles, diminishing any pace or tension that had built in the previous chapters.

There are plenty of possibilities for interpretation, and being so close to the story may see you connect to it, but I never felt like the students’ protector. As a character with the power to alter their path, it’s disappointing that I rarely felt like more than an observer. The students were always within touching distance, and their story was enjoyable enough, but a tale so focused on childlike wonder and family should have had more heart and emotion.

It may be a charming, narrative-focused VR experience, but Deracine is let down by its traditional adventure game design. Your interactions go further than exploring and learning, adding a puzzle element that detracts from the characters and the beautiful world. The inconsistent pacing and storytelling diminish the possible impact of the students’ tale, making it difficult for any emotion or tension to come to the fore. Deracine has a world worth seeing, but it’s not likely to stick with you once you’ve left.