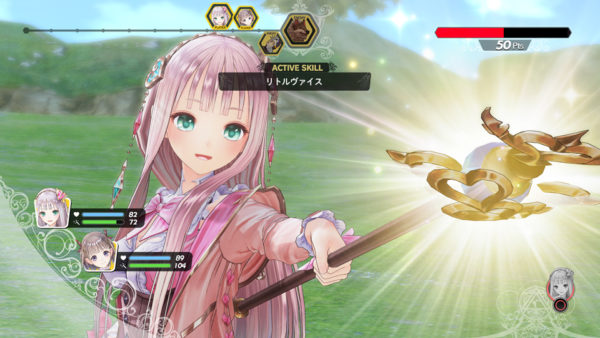 Today Koei Tecmo and Gust announced the voice actors that will play the main cast of its upcoming JRPG Atelier Lulua: The Scion of Arland.

Lulua herself will be voiced by Miyuri Shimabukuro, who is actually rather new on the voice acting stage. She debuted last year and she is best known as Yuuna Yunohana in Yuuna and the Haunted Hot Springs.

Eva Armster is voiced by Kana Asumi, who played Lissa in Fire Emblem: Awakening and Blanc in the Hyperdimension Neptunia series.

Piana is played by Kaoru Akinyama, who reprises her role in Atelier Lulua from past games of the series. She also appeared in other roles in several Atelier games, including Cole Dueller and Horo Horo in Atelier Rorona: The Alchemist of Arland.

Christoph Orel Arland is voiced by Natsuki Hanae, who played 9S in NieR: Automata and Alm in Fire Emblem Echoes: Shadows of Valentia.

Rorona is of course played by the adorable Mai Kadowaki, who reprises her role in Atelier Lulua and played Emil in the NieR series. Incidentally, she is one of my favorite voice actresses.

Fix Finis is voiced by Wataru Hatano, who played Leon Kuze in Muv-Luv Alternative Total Eclipse, Felt Blanchimont in Atelier Iris 2: The Azoth of Destiny, and Josuke Higashikata in the JoJo anime and games.

Nicodemus David Dieter will be played by Yoshitsugu Matsuoka, who lends his voice to everyone’s favorite (or least favorite) harem king Kirito in Sword Art Online. He was also Therion in Octopath Traveler and Professor Alucard in Nights of Azure.

Lionela Einze is voiced by Kei Shindou, known as Kyouka Jirou in the My Hero Academia series (and game) and reprises her role in Atelier Lulua from Atelier Rorona.

Last, but not least, Chim Dragon is played by Yuuko Sanpei who is best known as Boruto from the Naruto franchise.

You can enjoy artwork for all the characters mentioned in the gallery below, alongside two new screenshots. If you want to see more about the game, you can check out the more screenshots from yesterday.

Atelier Lulua: The Scion of Arland will be released in 2019 for PS4 and Nintendo Switch.