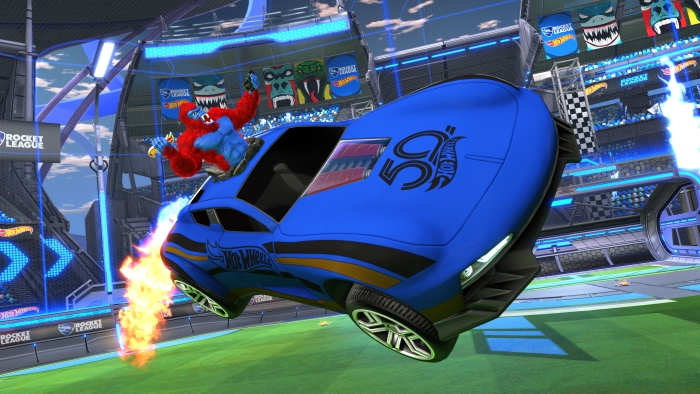 Developer Psyonix is partnering with Mattel to celebrate the 50th anniversary of Hot Wheels with paid DLC, free arena and customization items, and physical toys. The two have collaborated together on both in-game and retail with Hot Wheels DLC last year and the Hot Wheels Rocket League RC Rivals Set earlier this year.

The Hot Wheels Triple Threat pack will contain three battle-cars modeled after the toy cars Fast 4WD, Gazella GT, and MR11. Each car will come with four unique decals alongside the ‘Gorilla,’ ‘Snake,’ and ‘Spider’ toppers that are “straight out of the Hot Wheels canon,” according to the studio’s announcement post.

All players will receive two toppers, an antenna, a flag, a set of wheels, and a banner for free regardless of purchasing the DLC. The Hot Wheels Rivals arena will also be added into the game for free, an ordinary Rocket League arena decorated with the toy’s iconic orange roads and loops.

Additionally, Mattel will be releasing the physical Hot Wheels Rocket League 5-Pack to participating stores in mid-October. The pack of die-cast toys will include the three cars listed above and the Twin Mill III and Bone Shaker cars released as DLC last year. “Specially-marked packs” will also contain a code to unlock an exclusive in-game DLC item, ‘Hot Hot Wheels.’