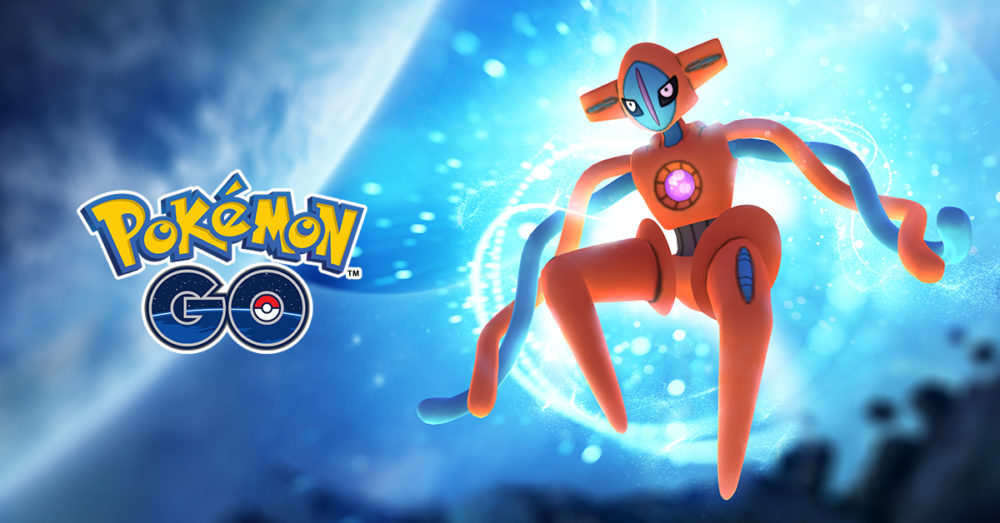 Gather your Bug, Dark, and Ghost-type Pokemon (or at least Pokemon who know those types of moves), stock up on potions and revives, and watch the skies! The extraterrestrial Pokemon Deoxys is invading Pokemon GO very soon.

Earlier today, the official Pokemon GO site revealed Deoxys would be a part of the next EX Raid cycle. This Psychic-type Pokemon burrowed into the hearts and minds of gamers thanks to its literal alien design, eternal rivalry with Rayquaza, and theme song (which might be the greatest battle theme song in the series). Oh, and we can’t forget Deoxy’s multiple forms that completely alter its stats and moves.

Even though Deoxys is known for its ability to switch between a jack-of-all-trades, a tank, glass cannon, and a scarlet speedster (sunny speedster if you catch a shiny Deoxys) form, Niantic is starting off slowly with just Deoxys’ Normal Forme. This leaves the Defense, Attack, and Speed Formes in a weird void. Trainers will probably be able to catch these forms soon, but Niantic isn’t saying when. For all we know, they will feature in the next several EX Raid cycles.

As with all other EX Raid Battles, players can’t use standard Raid Passes to fight Deoxys. No, they need special EX Raid Passes that only are doled out after qualifying Raid Battles. While gamers will now see if a Gym can host qualifying battles thanks to an update, EX Raid Passes are still limited to particular dates, times, and locations. Therefore, players who have a doctor’s appointment at the same time as an EX Raid will have essentially earned a digital paperweight.

Now, you may wonder how Pokemon GO’s new Friendship system will play into Deoxy battles, and I have some good news. Not only will trainers’ Pokemon hit harder if they raid with friends, but trainers can now invite their friends to participate in EX Raids with only two stipulations. Players can only receive the invite if they are Ultra or Best Friends (i.e., their friendship meter has three or more hearts), and trainers can only invite one friend per raid. Just keep sending friends Gifts, and you’ll be Best Friends in no time.

Until Deoxys invades Pokemon GO’s EX Raid, trainers should keep strengthening their best Psychic-counters and make as many friends as they can. Players will need as much help they can get to stand a chance of stuffing this inter-planetary powerhouse into a Pokeball.