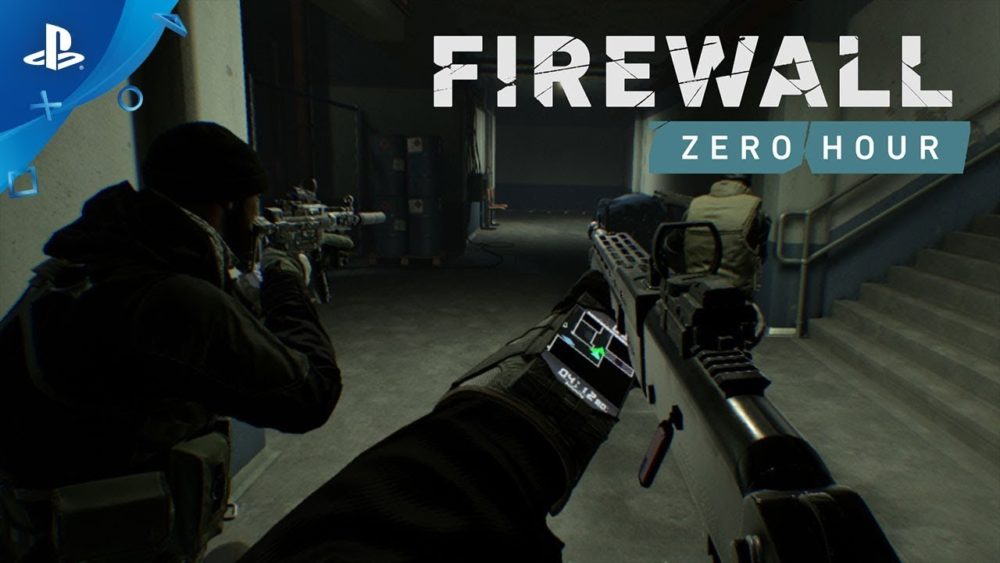 Some VR titles struggle for a balance between gimmicks and real immersion. First-person games have been known to over complicate things, asking you to do things you’d never see in a standard shooter so that the possibilities of VR can be shown off, such as taking pins out of grenades or physically bending down to activate switches, and they often have the opposite to the desired effect. Firewall Zero Hour plays exactly like a traditional first-person shooter, immersing you in the experience through the surroundings and gunplay instead of gimmicks, making it one of the best first-person games available on PlayStation VR.

Firewall only really has one mode, whether you’re playing online or off. One team tries to find and hack a laptop that the other team is defending. By taking down the firewalls (hence the title), the laptop’s location is revealed and the attackers can make their way to it. If one team is eliminated, they lose, but the main objective is to protect or find the elusive laptop. It’s very reminiscent of the likes of Rainbow Six Siege, with C4, blocking doors, and signal interrupters being integral to the tactical play. You and your team of up to four players need to work together to defeat the other team and secure the objective.

Thankfully, that tactical play is combined wonderfully with sharp, intuitive shooting. Taking full advantage of the Aim Controller that was introduced alongside fellow PSVR title Farpoint, Firewall’s action feels tense and responsive. Being hunkered down in a corner of a room, waiting for the timer to count down as you unload tens of assault rifle rounds into unsuspecting foes is incredibly intense. By simply moving the controller closer to your eyes, you can take out foes from any range, and the responsiveness and accuracy of the shooting ensures that Firewall works just as well at speed, Doom style, as it does when opting for the stealthy approach.

The game controls excellently with the Aim Controller. The peripheral feels great in your hands, aside from a few times where it drifts out of position and you have to shake it back to life, and the buttons are exactly what you’d expect from any other shooter. Pushing in the left stick, by the barrel of the gun, sees you sprint, Circle sees you crouch, and the layout is intuitively designed to mirror that of a DualShock 4 as closely as possible. That makes it quite easy to jump into, with only the head movement and aiming left to become acclimatized to.

It’s tough, too, whether you’re playing against players online or against the AI. In Training, the mode that sees you, as part of a team or solo, take on a larger enemy team, when you activate a Firewall point or hack the laptop, you’ll often be overwhelmed by enemies. Even with a full squad of players who are familiar with the game, defending a point is challenging, and will really test your reactions and shooting skills.

The standard shooter feel also extends to the game’s leveling and loadout systems. As you’d expect, every kill, completed game, and win nets you XP that goes towards unlocking new guns, attachments and skills. Each character has particular skills, such as more ammo or faster reload times, so picking the correct loadout on different maps, and for if you’re attacking or defending, is crucial to success.

Progression is too slow, however. It’s not the case for everyone, but a lot of VR owners tend to play in smaller chunks. The immersive nature of VR can make playing games like Firewall tiring, so you’re unlikely to put your headset on for an all-day binge; a couple of games here and there is more than enough. However, the progression seems to have been designed for those who plan to spend tens of hours with the game. Even getting to level 4, when you unlock the ability to create a class, can take hours if you’re not dominating every single match. It simply feels like you’re not getting anywhere or unlocking anything interesting, unless you’re willing and able to treat it like Call of Duty and spend long stints with the game.

Firewall Zero Hour’s immersion is also helped by its visuals. It’s one of the most impressive-looking PSVR titles, using lighting and particle effects unlike many others. The maps are varied, from contained hotels to expansive docks, but they all look great. The draw distance and mist in the night sky in the docks level gives it impressive scale, and the detailed surroundings and use of reflections in the smaller levels create the illusion of exploring somewhere real. Even the lobbies add to the immersive feeling. More than once, I saw myself looking at and speaking to my teammates’ characters as if they were really there. We were a team in and out of the action, and Firewall’s ability to make you feel present is astonishing.

I also had very few motion sickness issues while playing. As a game in which quick movements and twitch reactions are important, I expected to feel uneasy after a few games, having done so before, but the small turns and blurred framing while sprinting curtailed issues completely. Quickly going up and down stairs felt odd at first, but once the head movement becomes second nature, it feels as natural as the rest of the game.

Firewall Zero Hour is a multiplayer experience at heart. The tactical, team-based gameplay of the Contracts mode is great when you’ve got a full team with mics at the ready, but the options are limited if not. You can jump into a public game, or play on your own, but any lack of communication dampens the enjoyment.

Also, just a week after release, finding full games is taking a while. For a game that sees you unnecessarily wait around a lot already, up to a couple of minutes between what are already short matches, waiting ten minutes or more for that seventh and eighth player can be frustrating. How quickly the player base drops off, only time will tell, but it’s a worry already. While Firewall is an excellent example of first-person immersion and VR gameplay, there’s not enough single-player content to make the possibility of empty lobbies not a concern. If you’ve got a few friends to play with, it shouldn’t be an issue in the long run, but solo players should consider what they want out of Firewall before they commit. Getting to the higher levels and unlocking the best gear takes a while, but there’s no telling how long doing so will be possible without a lot of waiting around.

Firewall Zero Hour is a masterclass in accessible, immersive VR first-person shooting. Its sharp, intuitive tactical gameplay and well-designed maps make for intense 4v4 action that’s a level above anything else available on PlayStation VR. However, it cannot be ignored that the progression slog and rapidly emptying lobbies make Firewall a difficult game to commit to. Grab a few friends for a couple of action-packed rounds and you’ll have some of your best VR experiences, but go in alone and you’ll be frustrated sooner rather than later.