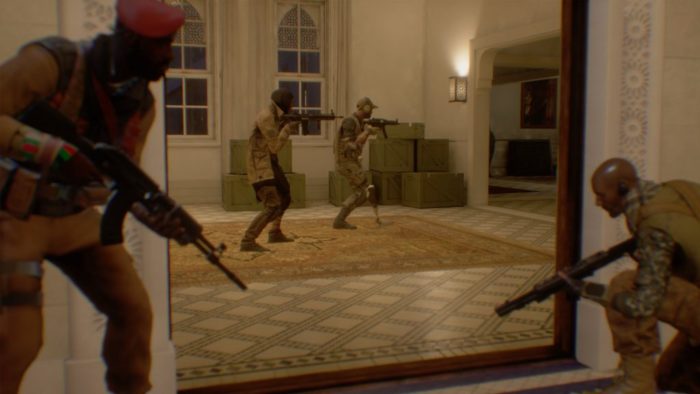 Firewall: Zero Hour only has a single PvP game mode due to the smaller install base of PSVR users compared to non-VR users, but the developers plan to add more modes to their multiplayer-focused game if it garners enough interest.

For those unaware, Firewall: Zero Hour will only launch with two main game modes at launch: Training and Contracts. Training can be played either solo or co-op, tasking players to defeat multiple AI enemies and complete various objectives. Meanwhile, Contracts is a tactical team-based 4v4 game where one team must defend a laptop from being hacked by the opposing team.

Speaking to UploadVR, First Contact Entertainment boss Hess Barber said implementing multiple PvP game modes could split the player base. “We’ve definitely talked about all that, but the obvious reason not to do that right now is the player base.”

Understandably, most PSVR games that feature multiplayer modes have empty lobbies due to the low player base. Oftentimes, most PSVR gamers would need to join various communities in order to hop in a multiplayer match. It’s worth noting that a total of 3 million PSVR units have been sold worldwide, while around 80 million PS4 units were shipped so far. “Even if it’s as big as it could be, it’s still gonna be smaller than a normal PS4 game so we don’t want to have multiple game modes spread out and chopping up the player base,” said Barber.

Nonetheless, Barber assures the community that they plan to add more content if Firewall: Zero Hour maintains or grows its community. “Once we see what happens with the players and if there is a good, consistent player base, and it keeps rising, plus DLC, and people keep coming to it, then we’ll release those game modes so we don’t chop up players as much.”

Explaining further, Barber said that they have been working internally on other game modes, but have hesitated in implementing them due to the low player base. Among the game modes mentioned include a traditional team death match and a hardcore mode where players can be downed in a single hit. “One of the modes we’ve thought of is a hardcore mode where there is no wrist map tablet, one shot you’re down, no names over heads, friendly fire, and all that stuff we want to get to down the track. Definitely something that we’re planning and discussing because there will be that group that wants more intense stuff.”

Firewall: Zero Hour is scheduled to launch for the PSVR on Aug. 28, 2018. The game can be played using the DualShock 4 or the Aim controller.

Update: The article’s original headline was edited for improved clarity about the reasoning for the simplified multiplayer.