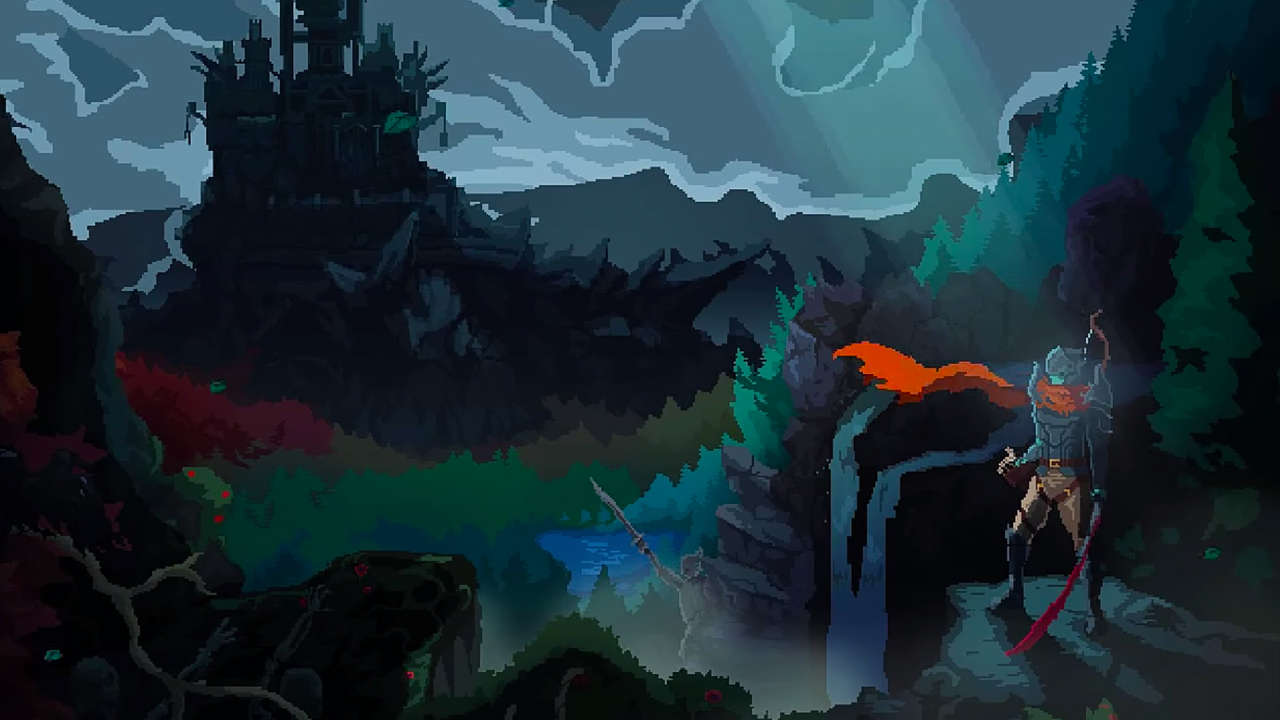 It’s not hard at all to see where Death’s Gambit’s inspirations came from. The collection of shards, the bonfire-like checkpoints, and the interconnected world and level design all make it abundantly clear: similar to Salt and Sanctuary, Death’s Gambit is a 2D Souls-like that serves as an adoring love letter to From Software’s Soulsborne games.

The premise of Death’s Gambit is an interesting one. Players take control of a man named Sorun, a soldier from the land of Vados. Together with his army, he’s come to the foreign land of Aldwynn in search of his long-lost mother, as well as pursue an ancient myth of immortality that’s hidden there. The game begins when Sorun’s army falls, and he loses his life as well. But the story doesn’t end there; Death himself shows up to bring Sorun back to life so he can fulfill his purpose, and Death wants something in return.

What sets Death’s Gambit apart from most titles of its ilk is the way the world interacts with your character and his actions. Dying is very much a core part of the experience, and it’s refreshing to see how bosses and various NPCs react when you come back from the dead. In most cases, there are story and lore tidbits that you can only obtain by dying multiple times to specific enemies. Interestingly, the game doesn’t punish you by taking away your shards (read: souls) when you die. Instead, you’ll drop a healing feather at the place where you died, and you’ll have to go back and get it manually or pay up with shards to reclaim it from a checkpoint. In that sense, Death’s Gambit is a little more forgiving, as you’re allowed to take the time to level up and get stronger before going back to face whichever boss or enemy killed you.

Gameplay takes place on a 2D plane, where you’ll slash left and right, and even engage in some light platforming sections. Combat is kept simple for the most part, and Sorun will be able to equip two weapons, along with a shield that can be used to block and parry. As you defeat more bosses, you’ll also unlock talent points which can be used to unlock passive abilities to help you out. To add an extra layer of complexity to the combat, Death’s Gambit also introduces abilities tied to your weapon type. For instance, I started out with the Noble class and a halberd. One of the first halberd abilities allowed me to perform a straight stab that also increased my damage output for a few seconds. Abilities will consume soul energy, which is indicated by a purple gauge in the corner, and that can be filled up simply by attacking enemies. Surprisingly, I found that the abilities quickly became key to my success in most boss fights. These were fun to use for the most part, and once I had access to the greatsword, I was able to experiment with even more abilities.

Speaking of bosses, this is where the game falls short a little. For the most part, fighting the regular enemies and exploring the surprisingly huge 2D world was an absolute joy. Death’s Gambit puts its areas together in a way that makes sense, and I was constantly hit with that “aha!” moment whenever I unlocked a shortcut in a faraway level that led me all the way back to the central hub area. But the bosses themselves are disappointing, and they come in varying qualities.

Some bosses, like the Bulwark of Aldwynn I fought early on in the game, provided me with a real sense of challenge that tested my skills and mastery of my weapons. It was a matter of learning boss patterns, figuring out which attacks I had to dodge, and when it was safe to attack. That said, most of the other bosses were either too simple or too gimmicky to give me any sense of accomplishment when I beat them. For instance, I ran into a mid-game boss who was able to snipe me from long range, but it was almost impossible to determine when her shots would actually fire, and time my dodges properly. It became a matter of simply spamming the dodge button and hoping those shots wouldn’t hit me. Her basic moves weren’t too hard to figure out, but it’s the little things like that which can make the fight feel unsatisfying.

The good news is that all bosses have heroic versions, and you can fight them again when they have increased stats and even different move sets. If, like me, you thought the base bosses were a bit on the easy side, you might have a bit more fun with the heroic ones.

During my experience, I also ran into some audio glitches on the PS4, where the sound effects or the music would cut off abruptly. This could happen in boss fights as well, which made those encounters feel even more lackluster and devoid of any tension. At the moment, the PS4 version also suffers from frame skips and hitches, which could very easily spell death for you in an action-heavy game like this one.

While the first half of the game provides a smooth difficulty curve, once you reach the late-game areas, Death’s Gambit also starts to throw some new mechanics at you that almost feel unfair. Without giving away too many spoilers, there’s an area in the game where you’re forced to go through a gauntlet of insanely buffed up enemies that will give you a punishing debuff once you clear a set. These debuffs include health reduction per second and fewer healing items, and you have to go through the rest of the gauntlet at a huge disadvantage before you’re allowed to progress. There’s another area in the game that also deliberately messes with the player in ways that aren’t fun because you feel like the game pulled the wool over your eyes for a second just to play a mean trick on you. And this happens multiple times in said area.

See, the main thing that makes the Souls games so fun and compelling to play is that when you die it’s nearly always your own fault. Sure, you might get ambushed by unpredictable enemy placements (hi, Sen’s Fortress mimic) at times, but the game always gives you a chance to recover and respond in some way. Even when you do get bamboozled —whether it was a mimic that did the job or a slime enemy on the ceiling— these happen very rarely, making it easier to shrug off when you die. In that respect, Death’s Gambit falls short because of its over-reliance on a difficulty spike that’s not very enjoyable late in the game. I eventually got to a point where the game felt like it was more concerned with delivering an experience that was ‘out there’ and memorable, rather than focusing on the core mechanics that made it great.

It’s a shame because nearly everything else about the game is sublime. Death’s Gambit nails the desolate atmosphere of its world perfectly, and the music (when it actually plays) lends the game real charm and life. The story itself surprised me with how gripping it was, and even when things get dark, the game isn’t afraid to throw a bit of morbid humor into the mix as well.

For Souls fans, there’s a lot to love about Death’s Gambit. There’s a multitude of secrets to be found, shortcuts to be unlocked, and lore to be read from the cryptic item descriptions. When the game isn’t being held back by the weird boss and level designs or technical issues, it can be charming and sincere in its own right. For their first outing, developing studio White Rabbit did a wonderful job with Death’s Gambit. It has a lot of heart and promise, and despite my gripes with the overall experience, this leaves me excited to see where they might go next.