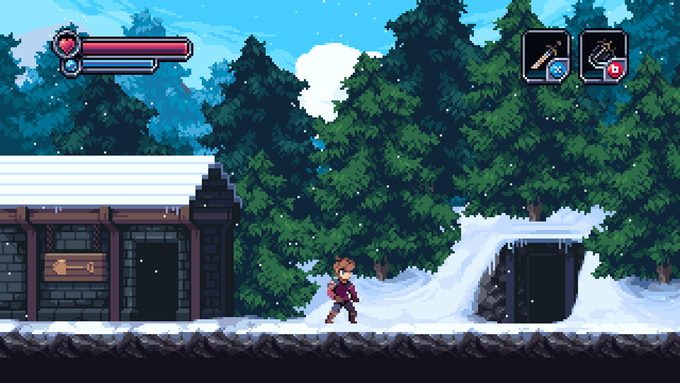 A sense of place is imperative in the recently-crowded Metroidvania sub-genre of action-adventure games.  Like Super Metroid, Castlevania: Symphony of the Night and the small handful of other classics worthy of being mentioned alongside them, the world players traverse is frequently a bigger character than the one players control. There’s little wonder why many could draw a map of Brinstar or the Alchemy Laboratory from memory alone. This ever-evolving understanding of the game world and the way it connects —even without the aid of an in-game map— is especially important in a genre that leans so heavily on backtracking to access previously inaccessible areas. For all of the things that Chasm, an aspiring new-school leader in an old-school genre, gets right, it utterly fails in this regard.

Because levels are procedurally generated per playthrough, Chasm’s world feels like each room ahead of our hero is plucked at random from a bucket of tile sets, leaving players at the mercy of a rather merciless AI dungeon master. Even a dungeon master must follow rules, though —there is an order to the chaos for the sake of progression. But you will never get to know Chasm’s depths in the same way one would learn Planet Zebes or Dracula’s castle, because every other room looks the same. That’s not hyperbole. Within the first 29 minutes of play, I recognized the same room layout three times. An alarming sense of familiarity compelled me to check my map more than once in my eight hours and 31 minutes with Chasm, only to find that I hadn’t accidentally backtracked at all. It’s a shame that one of Chasm’s biggest selling points is arguably its biggest drawback, because what remains is a mechanically sound, if unremarkable, side-scroller.

Chasm stars a nameless squire of the Guildean Kingdom who is suddenly given a task far above his pay grade. Residents of a sleepy adjacent town have disappeared into the mines below, and it’s your job to rescue them. And since you’re already down there, you must also figure out where all of these evil creatures suddenly came from.

In Chasm’s opening hours, you feel every bit of ineptitude of a knight-in-training who recently swapped a broom handle for a sword.  Even armed with a primary weapon and a suite of very familiar sub-weapon spells (throwing axes, knives and molotovs that behave exactly like Symphony of the Night’s holy water), a certain percentage of Chasm’s recurring enemies won’t be brought down with three or four blows. Fortunately, because the comparisons to Symphony don’t end here, it’s also possible to exploit a technique from that game and double your damage output with most weapons by jumping, swinging in the air on the way down and, just as you land, cancelling the recovery of the swing into another attack. Many enemies pack a rapidly advancing attack that will actively encourage the use of your back dash, another generous mechanic borrowed from Symphony.

One million video game kingdoms. One save room interior designer.

Though the procedural generation works against the game more often than not, you’ll definitely want to search every nook and cranny for displaced townsfolk. The job’s not entirely thankless, as most of the locals will repay your kindness with their expertise. Narina, the traveling magician, will teach you a few of her spells, for example. Dom the blacksmith will predictably convert the raw materials you find into weapons and armor. Ash will take recipes you’ve found and craft a variety of potions, and Princess the dog will… sleep soundly in front of the tavern furnace.

Saving lives isn’t the only incentive for exploring off the beaten path. There are numerous platforming challenge rooms that bestow a treasure chest, usually containing a disproportionately rewarding trinket, upon their completion. Chasm boasts several different weapon types (daggers, swords, axes, maces and a whip, because you can’t reference Castlevania too often) and gear enchanted with unique abilities. Some helmets grant you a familiar, like a sentient sword that floats along, following you like some kind of lethal balloon. Other types of gear enhance your spellcasting ability or modify damage for certain weapon types. A lucky/devout few will even find weapons that heal you as you damage enemies, or grow indefinitely powerful with each enemy you defeat. The diversity of gear effects rarely results in a diversity of play styles, though, as there is limited room for creativity in dispatching the otherworldly foes below the town.

There are a variety of locales —six in total, all linked by a series of teleporting pathways. Because the six areas aren’t truly interconnected, backtracking among them can become especially grating as the game wears on and your traversal abilities apply to progressively more areas. The game uses a somewhat inelegant fast-travel system featuring a single door that connects all of the major areas, and two to four smaller doors that spits the player out in a different corner of a given area. It’s not a deal-breaker by any stretch, though it does seem to be another example of procedural generation hindering the game more than it helps it.

The moment-to-moment combat, smooth animation and attractive visuals are serviceable enough to see most players through to the end of the game’s modest duration, but it’s impossible to walk away from Chasm without feeling like the game is a missed opportunity. Most of what it does well can be contributed to Symphony of the Night, and the few innovations it makes of its own are of the one-step-forward-and-two-steps-back variety. Chasm so desperately seems to want a seat at the Metroidvania table. It just forgot to bring anything new to it.