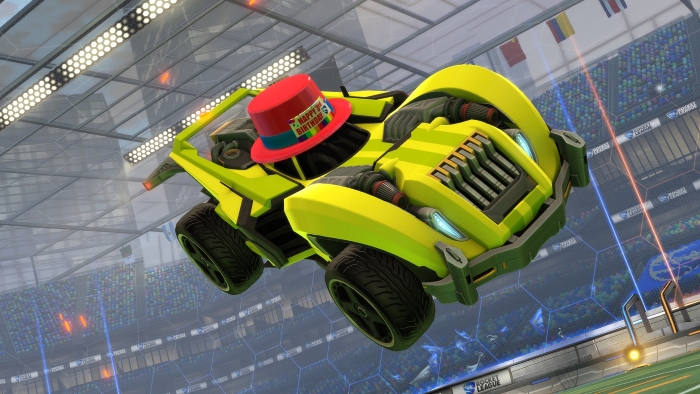 Rocket League will be holding an in-game event to celebrate the game’s third anniversary since its initial launch, developer Psyonix announced today.

Teased in the game’s summer 2018 roadmap the studio released in May, the anniversary event will begin on Monday, July 9 at 1 p.m. ET and will last for two weeks until Monday, July 23 at 8 p.m. ET. The event will feature a new playlist called 3v3 “Anniversary” Playlist and adds a new stadium that is modeled after Psyonix’s previous game, Supersonic Acrobatic Rocket-Powered Battle-Cars (SARPBC).

SARPBC, a vehicular soccer game that could be seen as a blueprint to Rocket League, released for the PlayStation 3 in 2008 and is also celebrating its 10th anniversary this year. The “Throwback Stadium” will have independent goalposts not connected to the stadium’s walls, and a lighter ball closer to the feel of the original game. The stadium is only available in the anniversary playlist, but the studio promises to add it to local, private, and tournament matches in the “next major update.”

The anniversary event will reward new customization items similar to past events. “Balloons” can be earned by completing matches online and redeemed for specific items or Golden Eggs. The Golden Eggs do not require any key to unlock, and contains over 60 cosmetic items from retired crates.

Psyonix has more updates planned for the game over the next two months, including cross-platform parties and an overhaul of its XP progression systems. A “Rocket Pass” is also planned for later this summer and offers new cosmetics for completing free and paid tiers through earning XP and challenges, similar to the Battle Pass in Fortnite: Battle Royale.