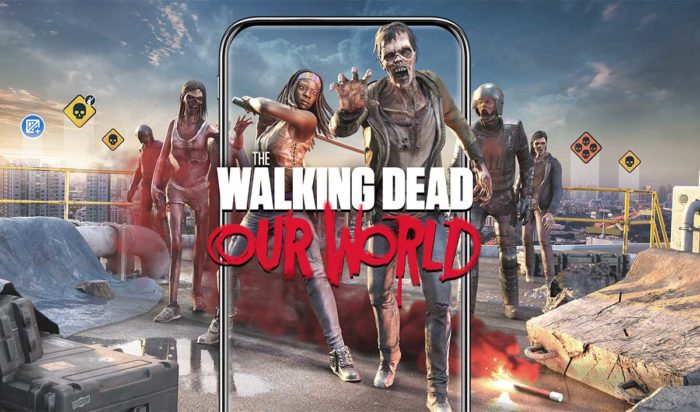 A trailer recently dropped for Next Games’ The Walking Dead: Our World, announcing a July 12 release date for iOS and Android devices. The trailer also gave a tiny look at Our World’s gameplay, which resembles Niantic’s Pokemon GO.

The Walking Dead: Our World is an augmented reality mobile game that places players right in the middle of a zombie apocalypse. Next Games’ website describes it as a “first-of-a-kind” and says that players will be able to defend themselves from walkers in any enviroment. Some familiar faces from the show, like Rick, Darryl and Michonne, will also make appearances.

The game will also feature missions to complete, some collectibles for survival and survivors to help face the deserted world. Players will also be able to form groups to complete challenges and earn rewards.

From the bits of gameplay in the trailer and screenshots on the game’s website, Our World also looks a lot like Pokemon GO, which may not be that surprising considering the massive uproar the monster-collector caused upon release and its summer of massive updates. An animated figure of the player moves as the player moves, and there are several highlighted locations, much like PokeStops and gyms in Pokemon GO. Though, as opposed to catching walkers in Pokeballs, players will be able to fight off hordes of incoming zombies with various weapons.

Next Games’ most recent The Walking Dead game, No Man’s Land, is of a tactical, turn-based game that allows players to build their cast of characters in order to fight against walkers and other players’ teams, so it will be interesting to see how Our World does with audiences.

The Walking Dead: Our World is set to release on July 12 for iOS and Android devices.