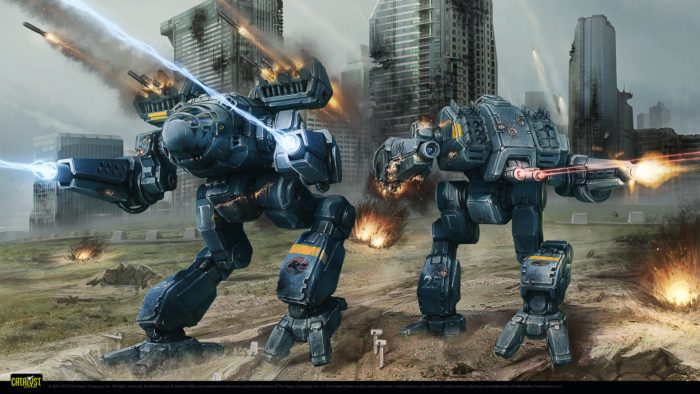 Read Every Tutorial You Can

BattleTech is an incredibly complex game with a near-dizzying level of strategy and customization. It’s overwhelming to say the least, especially when jumping into your first few missions. And while the game does a pretty poor job at explaining everything, there are some tutorials available to the player when they reach the mercenary ship portion of the game. This particular section is a shotgun blast of systems, stats and information, one which takes a good while to get used to. To help you get over the learning hump quicker, head over to the COMMAND CENTER section of the ship. You’ll want to chat with Darius, as most of the tutorial information is available in his dialogue options. He’ll give you info on contracts, MechWarriors, finances, and events.

If you need more information on the BattleMechs themselves, head over to the Mech Bay and chat with Yang. He’ll give you tips on customizing your mechs, as well as advice on how to repair them. On top of the tutorial options, be sure to read and listen to every piece of lore and narrative that you can as there is a lot to be gleaned from the way the characters refer to the world around them.

Know When to Eject

The biggest mistake I made early on was letting my character die while on a mission. I held off of ejecting him from his mech, thinking that I could handle the remaining enemies before they had a chance to shoot but alas, it ended in failure. When I returned back to my ship I was greeted by the news that my character would be out of action for 101 days. This lost me valuable time, money, and resources and could have easily been avoided had I ejected early on. Ejecting a character is the only way to ensure you get them away from combat before they can be killed. Early on in the game you shouldn’t be afraid to pull someone out of battle, especially since you can usually complete a mission with just two or three BattleMechs. The eject function is located in the bottom left of the screen by the mech HUD and is represented by a red box with a black upwards arrow in it.

Pulling someone out early is much better than having them out of action for weeks at a time, so be generous with that eject button.

Something that is not obvious when starting out is that you can choose which weapons to fire with before each attack. This is done by toggling each one in the bottom right. You’re not going to want to be firing everything you have at weaker enemies, or those that are low in health. A good tip is to check out the damage stats for each weapon and then compare it to how much health your target has left. You can overcompensate a little, to account for missed shots, but keep it restrained and conservative. The reasons for this are that you don’t want to waste ammo, or overheat your mech. Firing everything at once is a surefire way to heat up, which can make the difference between success and failure in some fights.

Be aware of what each weapon does, and try to utilize them in the correct situations. You’ll quickly get to grips with exactly how much to fire off with each attack as you progress, but early on when you can take more risks, it’s good to get into good habits.

BattleTech is a very traditional take on the strategy RPG genre. As a result, it can be incredibly slow at times, with everything from attacks to enemy turns taking up a significant amount of your time. Matches can end up being up to an hour long, which is especially frustrating if you have to replay sections after dying. There are no dedicated settings for speeding up the game, but there are a few things you can do to cut your mission times in half, while still retaining the core gameplay experience. Firstly, you’re going to want to turn off the dynamic attack camera which is the culprit for those long animations where your mech will move and fire from a close third-person perspective. If you want to speed things up further you should turn off the game’s cinematics, which are often painfully slow. This includes melee animations, jumping animations, and enemy animations. Doing so will give you more stability in terms of framerate too, as the dips tend to happen when loading into a cinematic.

It’s all personal preference of course, but there’s no denying that BattleTech is a lot slower than its modern counterparts. This is most likely due to its roots as a board game, and will probably be ideal for some players. For the rest, though, its easy to up the pace without losing any of the game’s charm.

Melee is a Mech’s Best Friend

For the first five hours or so, the game is going to throw a lot of low level enemies at you. These are often fast-moving tanks that stack up a ton of Evasion bonuses, making it difficult to hit them with weapons. Luckily, the melee attack on most of the starting mechs is extremely effective against low-level fodder. Don’t be afraid to take risks and be aggressive early on, as long as you save often. Stamping on a tank feels and looks great and is a good way to build up your team morale for those special attacks. It may seem like a cheap tactic but it will get you through the first few missions in the game.

For more on BattleTech, be sure to check out our other guides.