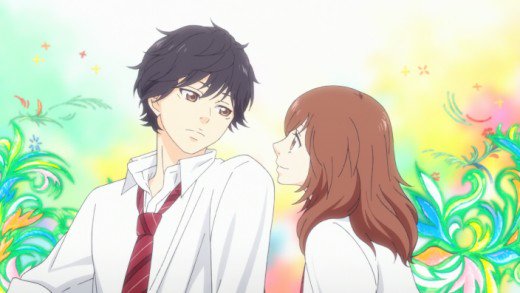 Jam-packed full of romantic entanglement, social drama and searches for belonging, Ao Haru Ride is the kind of shoujo show you can’t help but get sucked into. In a matter of 12 episodes, it sucks you in with its characters and keeps you there to see how they’ll resolve their varying dilemmas, whether that means confessing to their true love or finding a way to enrich their lives past the daily hassles of high school life. Of course, the short run time means it’s more than likely people will end up wanting more when the final credits roll, so we’ve got you covered with seven anime like Ao Haru Ride if you’re looking for something similar.

Sawako Kuronuma is a kind and timid girl that wants more than anything to make friends and be accepted by others. Unfortunately, she hasn’t found much success in this thanks to her resemblance of Sadako from The Ring, which has left many scared to be near her or get to know her.

This all changes one day, however, when the popular boy Kazehaya begins talking to her, becoming her friend and helping to bridge the gap between her and others. Love soon blossoms between the two in some fun and unexpected ways, making for a show worthy of its acclaim among anime romance buffs.

Who says all shoujo characters have to look sweet and cute? In this fun twist on the genre, the grizzled and manly Takeo Gōda takes center stage as he pursues his chance at a first love with the girl of his dreams, Rinko Yamato, while his pretty boy friend Makoto Sunakawa offers him help and support along the way.

Even better, she reciprocates Takeo’s feelings, leaving them to navigate the new waters of one’s first love along with all of the hijinks and antics that entails. Full of laughs and genuinely heartwarming moments, this series is sure to leave you feeling warm and bubbly inside all the way through its 24-episode run.

When the series’ protagonists’ Ryuji and Taiga team up to help each other win over their respective crushes, they’re far from what one would call the ideal couple. Bickering constantly and more concerned with their own social circumstances than each other, they frequently land themselves in all manner of awkward situations and hare-brained schemes that only serve to push their targets of affection further away.

With time though, this proves to be the foundation of the beginning of their relationship, which soon blossoms into a love story like no other. The time will fly by with this 25 episode series as each new development pulls you further and further in, ending in a conclusion that is both satisfying and heartwarming.

A bit darker than the usual shoujo fare, Scum’s Wish begins on a sadder note as its protagonists Hanabi Yasuraoka and Mugi Awaya agree to use each other to get over their unrequited love for other people.

Before long though, this common bond between them allows for romance to blossom, complicating their original goals and forcing them to come to terms with who they are and what they really want. It’s not an easy journey to take, but by the end, almost everyone will find something to enjoy about this surprisingly heartfelt series.

Unrequited love can be a tricky thing to accept, as high schooler Akira Tachibana learns when she becomes infatuated with her boss Masami Kondo. Significantly older than her, Kondo has his own share of hardships he is trying to work his way through which allow him to sympathize with Akira, but he is less than thrilled with the idea of her being attracted to him.

What follows is a touching tale of learning to accept that some love isn’t meant to flourish, and an examination of who Akira is and what led her to desire love in the first place. Plus, at only 12 episodes, it’s a great bite-sized love story that can be enjoyed within a day. Don’t pass up on this stellar series from last season if you have the chance.

When Haruhi accidentally breaks a priceless heirloom at a prestigious private school for the rich and powerful, she has no choice but to work off her debt by working as a host in the school’s host club, run by some of the more eccentric students. Before long, she and the other members build bonds of friendship and love between one another, making their way through all manner of strange circumstances and stranger clients, and making everyone’s lives better as a result.

So long as you don’t mind a series that balances out its romantic drama with goofy shenanigans, there’ll be plenty to enjoy here for even the most distinguished of shoujo fans.

If you had the chance to restart your life from an earlier point, would you take it?

Such is the premise of ReLIFE, wherein 27-year-old Arata Kaizaki is given the opportunity to return to the age of 17 with the use of an experimental new drug. Through it, Arata is able to return to high school and try to fulfill some of his goals he never got around to before he grew up, allowing him to face things more contently once he reaches adulthood once again. Of course, things don’t go according to plan; before long, he finds himself embroiled in new friendships, romantic dilemmas and other complications of youth, leading to plenty of interesting situations for the discerning viewer.

Know of any other great shoujo anime Ao Haru Ride fans should check out? Let us know in the comments below, and check out some of our other lists of anime to check out if you like Spice and Wolf or Made in Abyss.