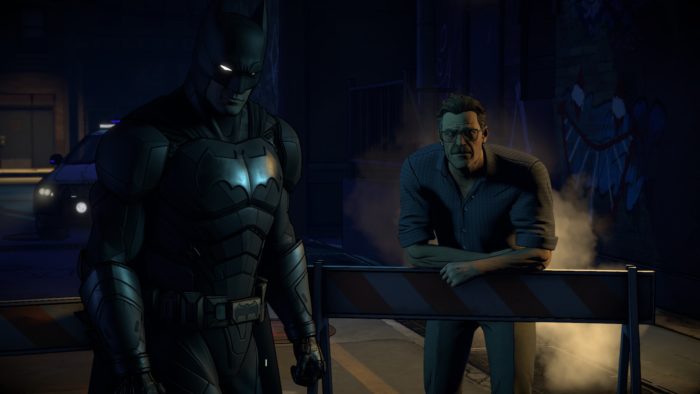 What Happens to Harley and the Virus

On the vigilante path, Harley and Bane are taken in by the Agency and used as Waller’s puppets to fight Batman and Joker. The virus will be a non-issue, as Joker hands it to Batman, who promptly destroys it. Harley and Bane show up at various points during the episode to try to thwart Batman’s plans, and it becomes clear that Harley herself has no more control over Joker.

On the villain path, Bane doesn’t appear in the episode at all. Harley and Joker team up as they plan virus bombs all over Gotham, and she shows up during the dinner party near the end of the game. However, Bruce and Selina team up to take down the villainous couple during the party, and Selina holds Harley down while Bruce chases after Joker.

What Happens to Tiffany

If you have been distancing yourself from Tiffany but encouraged her to join the Agency, she’ll show up at the church to assist Batman in defusing the bomb. Assuming you’re on the villain path, later on, she’ll show up at Joker’s trap room and reveal that she was the one who killed Riddler. At the end of the episode, you can choose to either talk to Tiffany yourself or have Waller arrest her. If you choose to talk to her, Batman can remind her not to forget who she is right before she gets on a helicopter to join the rest of the Agency.

On the other hand, if you told Tiffany the truth, she joins your ranks as Batman’s new partner, and she can accompany you to the crime scenes. If you’re on the vigilante path, she’ll confess to having killed Riddler right before Joker kills Waller. Near the end of the game, Batman will talk to Tiffany and you can either give her a second chance and become her mentor or turn her in to Gordon. Choosing the former will allow the two to continue to work together as partners.

In the final choice presented in the game, you have the option of either giving up on being Batman or letting Alfred leave Wayne Manor for good. If you choose to let Alfred leave, Bruce says that he’ll never stop being Batman and that it’s a part of him. The game ends with him looking up at the bat signal in the sky.

If you choose to give up the bloody crusade, Bruce will promise Alfred that he’ll give up his mantle to keep his family together. He promises to help the city in whatever way he can as Bruce Wayne, and Alfred agrees to stay in the manor for one more night.

Depending on whether you’re on the vigilante or villain path, along with what you said to Joker in the final confrontation (when he asks if you ever regarded him as a friend), the ending cutscene will be slightly different.

If things ended on a bad note, Joker will be seen in Arkham Asylum harboring a grudge against Bruce. However, if you told Joker that you were friends, Bruce will show up at the Asylum to visit him right before the scene cuts out.