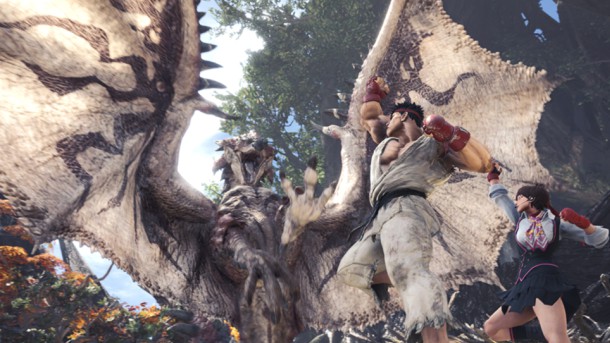 As if Monster Hunter World couldn’t look more exciting, now Capcom seems to be sweetening the deal even more for its players. Street Fighter fans will soon be able play as either Ryu or Sakura in the game, courtesy of a couple of Event Quests.

The two characters will be introduced into the game as character skins that can be equipped as an armor set. Regardless of a character’s gender, equipping the full armor set for either Ryu or Sakura will allow them to become either of those characters, complete with fully voiced lines and unique character animations. According to the company’s update, the full public release of the two isn’t set for some time.

However, PS4 players will be able to access the Ryu skin early if they have a save file for Street Fighter V on their console. Having that save file will open up an option to complete an Event Quest called “Down the Dark, Muddy Path”. Completing that quest will give you the necessary materials needed to go to the smithy and craft your very own Ryu skin. Players that don’t own a PS4 or a save file for Street Fighter V will be forced to wait longer. Capcom promises that the Event Quests will be part of the normal quest circulation for all versions of the game eventually, but haven’t given a concrete date on when players can expect that.

Also coming with the two characters are their iconic Hadoken and Shoryuken attacks. Well, sort of. You can use them, but they are considered premium gestures and will retail for $3.99 U.S each. Street Fighter V has also returned the favor in its game, offering a few Monster Hunter World character skins for its players. For the full reveal trailer on Ryu and Sakura, check it out here.

Monster Hunter World is currently available on PS4 and Xbox One with a PC release slated for the Fall.