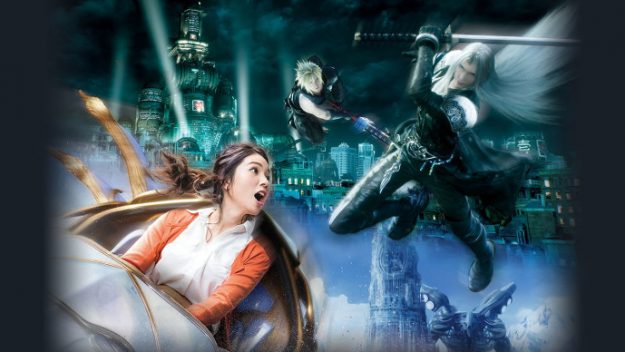 If any die hard Final Fantasy fans happen to be making their way to Japan, they may want to make a detour to the local Universal Studios. Beginning on Jan. 19, Universal Studios Japan will be allowing people to experience the Final Fantasy XR Ride. A virtual roller coaster that uses re-purposed VR headsets to give people a chance to experience the world of Final Fantasy. In a brief teaser video we see a woman riding along a roller coaster and watching Cloud and Sephiroth engaged in battle, as well as some panning shots of Midgard and chocobos running for good measure.

The ride is a part of Universal Studio Japan’s yearly Cool Japan event and will only be a available for a limited time. The event is a celebration of five of the top Japanese entertainment brands with this year including Final Fantasy, Detective Conan, and Sailor Moon among other things. The festivities will start on Jan 19. 2018 and last roughly six months all the way to June 24. Below is a more detailed excerpt from Universal Japan courtesy of Comicbook.com.

“Universal Studios Japan will be holding the Universal Cool Japan 2018 event for a limited time only, from January 19, 2018 to June 24, 2018. At this event, the worlds of five top Japanese entertainment brands chosen from internationally-praised manga, anime, games, music, and fashion will come together and be reproduced on an unprecedented scale with intense reality and world-class quality. Furthermore, the world’s first “XR” Ride will be introduced at this event, offering an super real experience. Universal Studios Japan will popularizes world-class Japanese entertainment across the globe, while delivering the best entertainment in the world to its guests.”