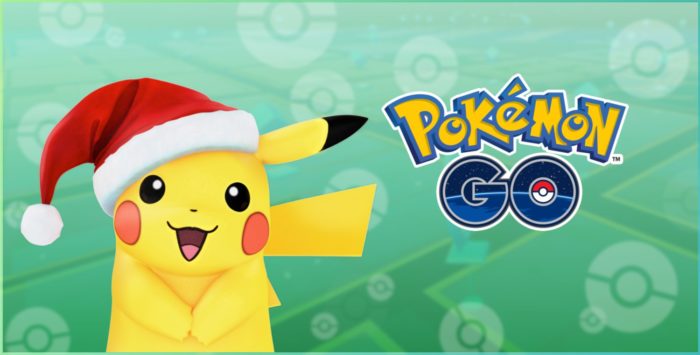 Pokemon GO’s holiday event kicks off later today and will add even more new Pokemon, see the return of the Santa hat-wearing Pikachu, and a few other bits to keep fans catching ’em all.

The news comes via the Pokemon GO blog, which details what fans can expect as part of the game’s second holiday event. Just like last year, players will be able to catch the Santa hat-wearing Pikachu, but this time it’s not alone.

As of 1:00 PM PST/ 4:00 PM ET today, you’ll be able to find 20 new gen three Ice-type and Water-type Pokemon. Players can look forward to seeking out Luvdisc, Milotic, Feebas, Wailord, and more. It’s also worth noting that the legendary Kyogre can be spotted lurking in the background of the promotional image accompanying the blog post (found below), so perhaps we’ll be graced with its presence soon, too. The event will also see an increase in the number of Ice-type Pokemon you’ll encounter as you explore the world.

Fans will also receive a single-use Egg incubator from the first PokeStop they visit each day between Dec. 22 at 1:00 PM PST and Dec. 25 at 1:00 PM PST. During this same time, some special boxes will be purchasable from the in-game store. These can include Super Incubators, Lure Modules, and Star Pieces which earn bonus Stardust for 30 minutes from when you activate them. Then, from Dec. 25 through Jan. 4, the in-game shop will then feature special boxes with items like Premium Raid Passes, Super Incubators, and Star Pieces.

Just yesterday, Niantic also revealed that a new AR+ mode was now available for those players using an iPhone 6S or later running iOS 11. AR+ fixes Pokemon to a point in space, making them seem like they’re actually in the real world, rather than just floating around in front of you. It also has a number of other neat features which you can read all about here.