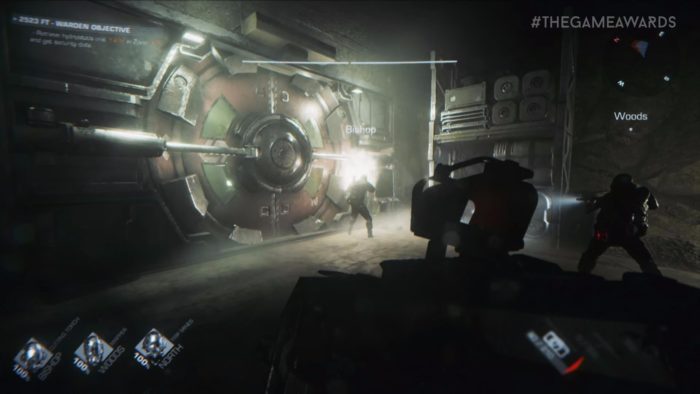 The upcoming co-op horror shooter from 10 Chambers Collective was announced months ago with mixed reactions to its title but a new gameplay trailer may give the game hope just yet. GTFO is an eerie adventure that asks players to do exactly what its title suggests. It’s a title that didn’t necessarily go over well on social media back in May but the trailer revealed at The Game Awards 2017 highlights areas where the game just might find some major success. This thrilling adventure groups players together in a team of up to four players and you will have to work together if you want to escape alive. Refuse to work together and you could be seeing an early grave.

The description for the trailer promotes the game as a “terrifying 4 player co-op game for hardcore FPS players.” Players step into the shoes of a group of scavengers who are collecting valuable items from a mysterious underground complex. Unfortunately for them, this complex has been completely overrun by terrifying creatures. The trailer certainly makes it seem as if GTFO might find success in atmosphere building but it’s still a bit hard to say if this game will lean on a spray and pray mentality or encourage more tactical gameplay. Either way, the first gameplay trailer for the game looks rather promising.

According to the trailer description, GTFO is slated to released in 2018 for PC. It’s unclear if it will be coming to console any time soon.