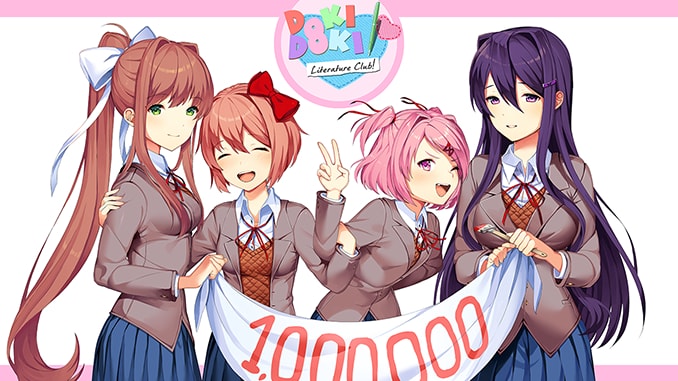 Developer Team Salvato has revealed today that their hit visual novel Doki Doki Literature Club has been downloaded by over 1 million people since its release on PC platform Steam this past September.

Dan Salvato has the following to say regarding his team’s recent accomplishment: “It’s only just now I’ve realized that nothing I’ve ever done in my life has had greater reach and popularity than a romance game with cute anime girls.”

For those unfamiliar with the title, its plot revolves around the acceptance of a young man into his high school’s literature club. The player takes control of the inductee as he interacts with the group’s four anime girl members: Sayori, Natsuki, Yuri, and Monika.

Curious readers should be glad to know that Doki Doki Literature Club is currently available on Steam completely free of charge, though DLC can be purchased for $9.99. Dan Salvato mentioned that although he’s working on his next game at the moment, he’s “considering some options for providing more DDLC-related content to fans in the future.”

Here’s hoping that Team Salvato’s next game features a similar premise, given how popular Doki Doki Literature Club seems to be among PC users. Dan concluded his post by saying that his team is committed to giving the community “more of what they want” and that he plans to “continue to work on cool stuff that the DDLC community can enjoy,” so the possibility isn’t completely out of the question. Fingers crossed that a husbando version gets announced soon.