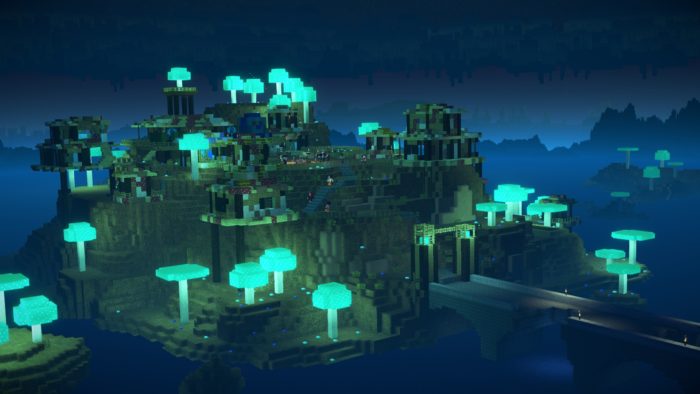 Minecraft: Story Mode continues to surprise with each episode release. While I continue to be skeptical about the weight of my ‘major’ decisions and the ‘Your Story Is Changing’ notification tab that appears onscreen whenever you respond in a certain way, Telltale’s writing continues to shine with the way the characters are developing and evolving as the plot barrels towards its conclusion. With the penultimate episode, titled Below the Bedrock, Minecraft: Story Mode has set the stage for its finale, and the journey has been an entertaining and heart-wrenching one so far.

Kicking things off with the escape from Sunshine Institute, Jesse and crew are getting acquainted with Xara, the mysterious Prisoner X who forced us to make a very tough choice at the end of last episode. After revealing her connection to the evil Admin, whom we now know as Romeo, and their dead friend Fred, it’s all up to her to construct a portal that will get our heroes back up to the surface and put an end to Romeo’s world domination plans once and for all. Story progression in episode 4 is slow, as we’re primarily concerned with finding the tools we need to help with Xara’s construction of the portal, but it also gives us time to learn more about the Admins and the friendship between the three of them.

As always, Minecraft: Story Mode is peppered with humorous writing, and Below the Bedrock continues that trend with a particularly silly segment where Jesse had to win a trivia contest about Fred’s personality before she could enter his house to find a weapon to defeat Romeo with. As we saw from the previous episode, the world underneath the bedrock is a pretty dark and dismal one. It’s essentially been ripped to shreds, and it has been years since its denizens last saw the light of day. And yet, they make do with what they have, such as entertaining themselves with mundane trivia contests on a daily basis.

The theme of friendship continues on in this episode, and Minecraft: Story Mode finally reveals the core message of this season. By drawing parallels between the friendship of the three Admins and Jesse’s own New Order of the Stone, players are left to wonder what it really means to have a close bond. It’s been evident ever since the beginning of episode 1 that Jesse and her friends have drifted apart. Aside from Petra, who continues trying desperately to keep the group together, everyone’s got their own lives elsewhere, and no one really has the time to go adventuring like they used to. And what lengths would you go to try to preserve that bond? What if it ends up destroying your friendship completely? 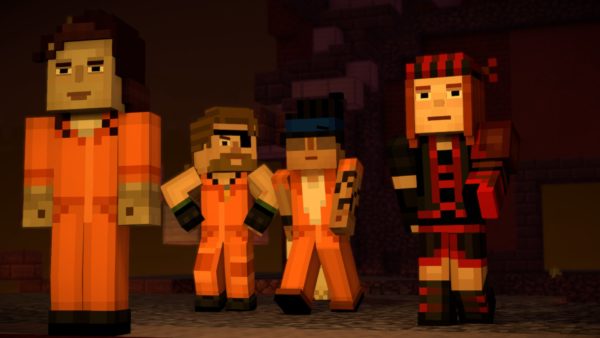 Petra starts to ask herself those questions, and she wonders if maybe she’s been trying too hard to keep everyone together. Through the last three episodes, I made a conscientious effort to have Jesse reassure Petra that even though everyone had gone their separate ways, it didn’t mean that they weren’t still friends. My Jesse encouraged her to find something she was passionate about and pursue that as well. Because, well, that’s just how things work in real life. School friends don’t stay together forever, but it doesn’t mean that connection would be severed so easily. And yet, when Petra finally comes to that realization in my game, it was something of a bittersweet moment to see her have that sort of ‘coming of age’ moment.

Petra’s not the only character who receives substantial growth in this episode though. Radar, who has been actively trying to get braver and more daring over the course of the adventure, is also finally blossoming as a reliable hero. Considering that we’ve only got one more episode left to go, it stands to reason that we should see our characters finally reach a satisfying level of maturity before we head into the final showdown. Still, it’s not all as feel-good as it sounds. Minecraft: Story Mode still has a few difficult decisions to throw your way, and it does so yet again at the end of episode 4.

While I did thoroughly enjoy the narrative in Below the Bedrock, the episode continued to suffer on the gameplay side of things. While I always thought they were superfluous, the series’ penchant for including segments where you could craft statues out of blocks have felt like a nice distraction to have for players who genuinely loved the creativity that Minecraft offered. I’m not particularly creative myself, so I often skipped these sections by building something completely mundane, or literally just leaving a singular block on the crafting panel and watch in amusement as the characters praised my sublime building skills. 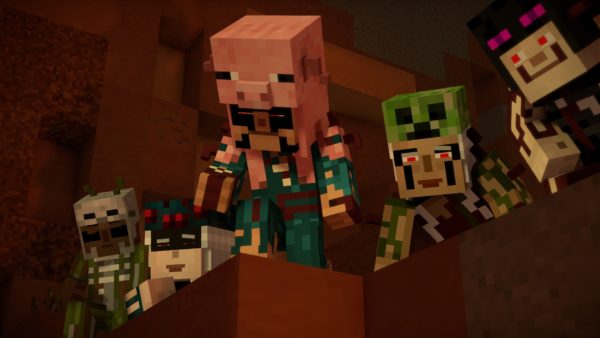 There are two instances in Below the Bedrock where Jesse is forced to build structures of sufficient quality in order to progress in the story. This has never been enforced in previous episodes, and it was the first time the stakes were actually raised when it came to the crafting aspect of Minecraft. For science, I decided to see what would happen if I put in minimal effort in these sections, and was sorely disappointed to see that the game just gives you a free pass regardless of how well or how badly you did. While I understand that Telltale probably didn’t want your story outcome to be shaped by how well you could build items with blocks, it’s also somewhat immersion-breaking to have the game reward you from a narrative standpoint for doing virtually nothing at all.

The clunky ‘combat’ also makes a return in this episode, and it’s particularly annoying because of how often it crops up. With an unnecessary stamina bar, weird analog stick controls, and a poorly implemented dodge mechanic, combat feels extremely cumbersome in episode 4. I appreciate Telltale’s effort for providing some diversity in the gameplay, but these sections felt like a complete drag, and I would’ve been much happier with a well-directed cutscene with QTEs instead.

In spite of these small complaints, Below the Bedrock is still another fantastic installment in the surprisingly well-written series so far. Minecraft: Story Mode’s second season continues to feature some of the best writing I’ve ever seen in a Telltale game, and the finale episode simply can’t come soon enough.