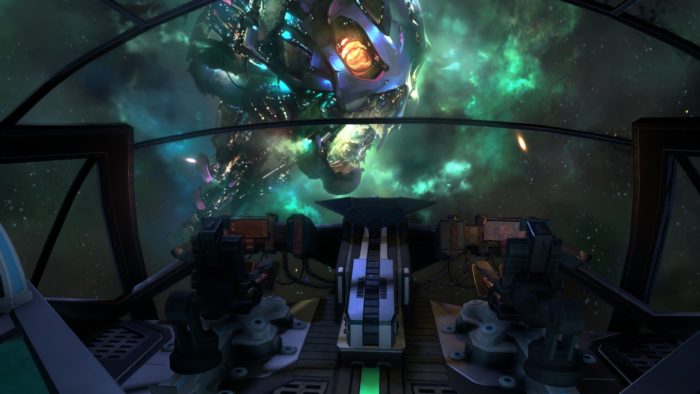 MARVEL’S GUARDIANS OF THE GALAXY: THE TELLTALE SERIES – EPISODE 5 ON PC

Marvel’s Guardians of the Galaxy has been in fairly safe hands with Telltale Games. From the series debut, I’ve had a great time adventuring around the galaxy, uncovering the story’s mysteries, and enjoying the excellent writing that perfectly encapsulates the Guardians and their personalities. Episode five has finally arrived, bringing this first adventure to an end, and following on from the stage-setting episode four, I expected a lot more than what I was left with when the credits rolled.

Episode five kicks things off with news of a Kree attack on the planet of D’Bari V. A rampant monster is attacking innocent people, drawing life from them without even touching them. Of course, this news is exactly what Star-Lord (Peter) needs to do the right thing and reunite the Guardians who were divided at the end of episode four.

Episode five does a great job in ensuring the series’ writing maintains its high standard. One of my main praises of Telltale’s take on Marvel’s galaxy-saving group is its ability to absolutely nail that Guardians of the Galaxy humor without it feeling out of place or like overkill. In this instance, it provided some comic relief during a scene that also helps to kickstart the episode and get you (and the Guardians) pumped for the adventure ahead.

Though it may be the final episode of the series, Don’t Stop Believin’ doesn’t shy away from digging deeper into the origins of the Guardians. Throughout this series, we’ve been given sneak peeks into the lives of the Guardians before they joined forces. What made them tick. What made them want to save the galaxy time and time again, or at least group up with the rest of them to try and make it a better place. Episode five puts the cherry on the top in that sense. It dives deeper and truly exposes these characters for the vulnerable, hurting, and, in reality, selfish people they are. They’re trying to do good in the hope that it’ll make the pain go away. I feel connected to these characters now, and though there are certainly some flaws within the episode, I was still left wanting more.

Guardians of the Galaxy’s final episode doesn’t just go all-out with the action. In fact, for the most part, you’ll spend your time talking with your fellow Guardians as you try and work out exactly how you’re going to stop Hala. A slower pace in a Telltale game naturally means some additional character depth, and as previously mentioned, episode five achieves this. However, there are some areas that feel underdone. One section of the episode focuses on exploring the relationships you’ve crafted with your fellow Guardians on your adventure thus far, looking into memories so Mantis can assist you. You get a sense of what makes the Guardians tick here, and what’s most important to them, but as what ultimately becomes a chapter of this 90-minute episode, it feels too basic. Watching Peter awkwardly walk around a bland environment interacting with colorful orbs isn’t fun, and I’d half expected there to at least be visual flashbacks of these seemingly significant moments. It feels like more could have been done here to make this feel like a more substantial part of the episode, but instead, it comes off feeling like padding to bulk the episode’s duration out.

Of course, it’s not a Telltale game if you don’t have decisions, and episode five is a bit of a hit-and-miss on this once more. While the experience can vary quite significantly based on the big choice you made in episode three, the finale also manages to make another major decision from a previous episode feel incredibly inconsequential (something I noted I was concerned about in my review). The episode does make up for it in the sense that you get some kind of rational explanation, but I’d still rather Telltale just commit to making these big decisions, or not do them at all.

Similarly, what feels like a major decision in the finale itself as to how things will play out largely feels pointless, too. Where I thought the camera would jump around and show how each Guardian was getting on with their part of the plan, I was instead left performing a repetitive task with the humorous commentary of my comrades to keep me going. Sure, it’s great to hear Rocket joking around, but I’d much prefer to have been there, helping each of them along with their tasks with QTEs rather than just hearing about it.

It’s a shame that what appear to be major choices are often overlooked in Telltale’s series, and I must confess it took the sheen off this finale for me. Telltale needs to start doubling down on these choices. With each major turning point they U-Turn or make redundant, the weaker their formula gets. After all, what’s the point in making a decision if, in the next episode, the game tries to bring everyone back onto the same path?

As a season, Guardians of the Galaxy delivered the kind of experience I wanted. It’s the most I’ve found myself laughing and smiling since Tales From the Borderlands, and I enjoyed the adventure and story laid out here more than the sequel movie that released this year. I’m excited for the inevitable second series so I can go saving the galaxy with the Guardians once more. However, Telltale really needs to up its game in making these decisions feel more consequential if its experiences are going to keep with the times.