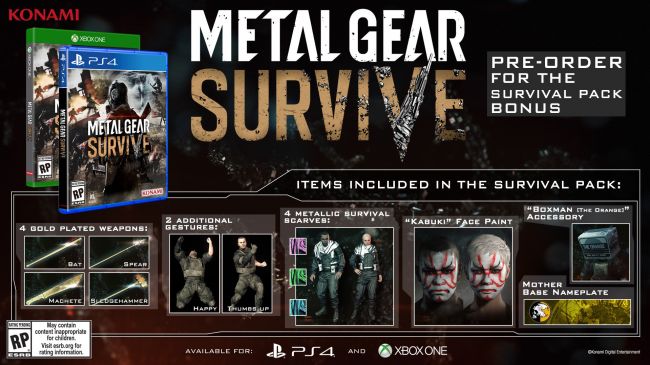 Despite having announced that there would be special news regarding Metal Gear Survive tomorrow, Oct. 25, Konami has gone ahead and announced the game’s release date this evening via its official Twitter account.

Metal Gear Survive will launch on PlayStation 4, Xbox One and PC this February 20 in 2018 for North America. It’ll be out one day later in Japan, and two days later in Europe, according to Konami.

Those who pre-order the game will be gifted a select number of additional items in a downloadable Survival Pack DLC package, which includes these items:

It’s unclear if this is the same news the Metal Gear Twitter account had been teasing for Oct. 25, but as this is pretty big news since we didn’t already have a release date, it’s quite possible the Konami account could have jumped the gun.

Curiously, the image released that shows off some of the DLC you’ll receive in-game doesn’t really mention the PC version, but it’s supposedly launching around the same time as the rest of the versions, though we’ll reach out to Konami for clarification on the upcoming release.

If you’re interested in trying out this interesting vision of the Metal Gear universe, you only have a few months left to wait. Consider playing through one of the excellent core entries in the interim.