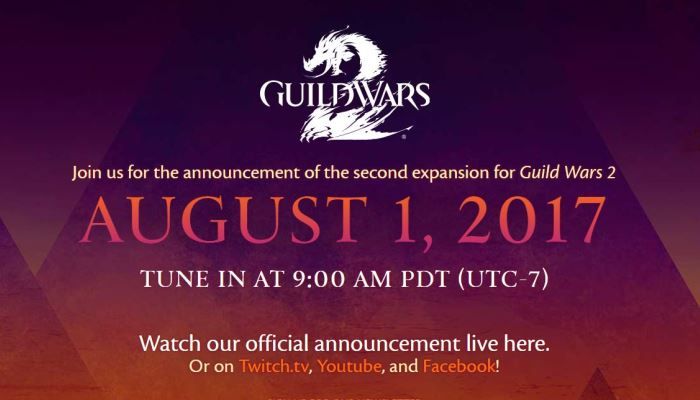 Guild Wars 2’s latest expansion has been teased to the world, and the reveal is coming this morning via a livestream conducted by Arenanet themselves. It’ll be the second expansion for the MMO, which will be reaching its fifth anniversary at the end of the month.

There isn’t a lot we know about the expansion yet, but Game Designer Linsey Murdock has teased the expansion’s title will be called ‘T___ of P___.’ What’ll fill in the gaps, and whether this is even true or not, will be discovered during the livestream.

The expansion will see players headed to the Crystal Desert and Elona, two previously unexplored locations within Guild Wars 2’s universe. Aside from this, we know there’ll be new Elite Specializations, which change the class you’re playing as into a new form, allowing you to attain different abilities. It’s also unsure whether or not we’ll get new base classes or races to play as.

The reveal will begin at 9am PDT, and there are a few places you can catch it; the place most people will be headed to is probably the Guild Wars 2 Twitch channel. You can also catch the streams on YouTube and Facebook. During every livestream, Arenanet also give out free swag and by watching you’ll be in with the chance to win, so if you’re a Guild Wars fan, this is the one to watch.