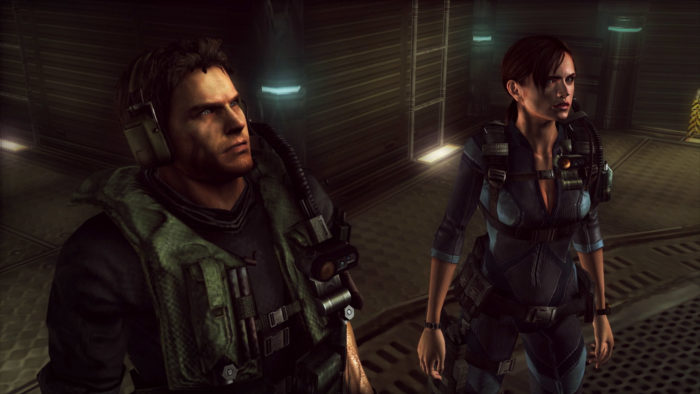 I have a soft spot for the Revelations spin-off games in the Resident Evil series. After suffering through the ugly mess that was Resident Evil 5, Revelations felt like a real breath of fresh air when it made its 3DS debut back in 2012. Unsurprisingly, the game made its way to the PS3 and Xbox 360 a year later, with even more bells and whistles to justify the second purchase. And now, in 2017, Resident Evil Revelations is back for another go-around on the PS4 and Xbox One. The only problem is, time hasn’t been kind to Revelations, and its cracks are starting to show.

I’ll get this out of the way first – the story in Revelations isn’t bad. It breaks away from the mainline plot so you don’t have to be a Resident Evil lore professor to enjoy this one. The plot does get pretty bloated in its second half, but then again, that’s pretty much par for the course with most games in the series. The setting in Revelations, however, is fantastic. The ghost ship Queen Zenobia is an excellent beginning area for the game, and it really brings back fond memories of the claustrophobia and architecture horror fans experienced in the Spencer mansion. That sense of terror quickly falls apart in the game’s second half, where it devolves into a crazy shooter fest where your characters are overpowered and decked out with guns, but again, par for the course when it comes to Resident Evil.

The PS4 port of Resident Evil Revelations is a decent one. Featuring upscaled resolution and graphics, the game really does look better than ever if you’re not looking too closely. With an improved frame rate that feels close to 60 frames per second, gameplay is extremely smooth and I can’t recall a time when the frame rate hitched or dropped. It was a rather pleasant experience overall.

What isn’t pleasant, though, is the sluggishness of how everything else feels. Character movements feel stilted, and the shooting is as floaty as ever. I’m not quite sure what it is with these third-person Resident Evil games, but Capcom just can’t seem to get the shooting right. It felt imprecise when I played it back on the PS3, and it still feels imprecise now, on the PS4. There are other irritating issues like character movement slowing down when you strafe left or right, and the dreaded swimming controls are still as clunky as ever.

The character models themselves are also starting to show their age. Not to mention the ugly textures you can spot in some environments when you look close enough. Despite being upscaled to a 1920 x 1080 resolution, there’s just no escaping Resident Evil Revelations’ outdated graphics. While it may have wowed folks on the 3DS and maybe even the PS3, it’s certainly not a very pretty game to look at in this day and age.

Let’s not forget the real shining star of Revelations, though. Raid Mode is back in all of its glory, and despite my grievances with the controls and graphics, I found myself sucked back into the gameplay loop of gunning down BOWs, leveling up, and unlocking sweet guns and loot for my characters. As expected, the PS4 port includes all previously released DLC, so the extra maps and characters are all packed in here as well. One thing I will say about Revelations is that even after all these years, the Raid Mode maps still hold up well in how tightly designed they are, and it’s a good ton of fun trying to maneuver your way around as you figure out shortcuts and other side paths to get the drop on your enemies.

2017’s Resident Evil 7 release aside, I stand by the notion that Raid Mode was the best thing to happen to the Resident Evil series in the last decade, and it all began in Revelations. I do wish Capcom could’ve developed some new Raid Mode content for the PS4 port (maybe adding Barry and Claire’s Revelations 2 models and making them playable?), but I’m plenty happy with the original content either way.

That being said, my time with the PS4 port of Revelations really only served to show how vastly superior Revelations 2 is in comparison. Both games follow an episodic format, complete with a cheesy B-movie style “Previously, on Resident Evil Revelations…” recap, and both come with Raid Mode, which is leagues better in Revelations 2. Revelations may have introduced these new elements to the series, but Revelations 2 is where they really started to shine. Which is no surprise, considering the fact that the latter is a much more modern game that looks and plays better, with Capcom learning from their mistakes with its predecessor.

Taking all of this into consideration, it becomes difficult to recommend this PS4 port to anyone who isn’t already invested in the Resident Evil series and wants to experience the story of the Queen Zenobia and the T-Abyss virus for themselves, or fans who absolutely loved Revelations and wish to play it again on a current-gen console. I could see newcomers potentially being turned off by the game just because of how janky it looks and plays in this day and age.

This isn’t an inherently bad game by any stretch of the imagination; it’s just not one that managed to withstand the test of time, no matter how much Capcom tries to polish it up. And if you’re a new player who adored Resident Evil 7 and you’re wondering if this little spin-off game is worth jumping into, I’d say have a go with Revelations 2, see how you feel about it, and then take things from there.