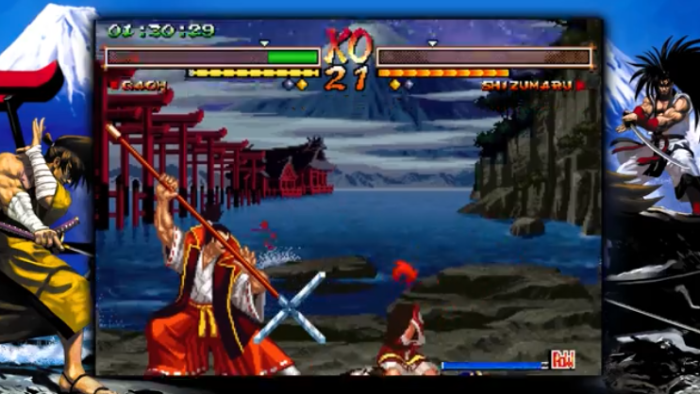 Some people prefer a good clean fighting game that strays away from excess blood or depictions of death. Others, however, like their fighting games with a heaping pile of Mortal Kombat level violence and a side of “oh crap that’s a lot of blood. I might get sick.” Samurai Shodown has always been a series for the latter. Seriously, the sheer levels of gore present in the popular arcade game has remained one of its best selling features. While the gameplay itself did have some rather enjoyable features, it was always the gore fest on screen that made Samurai Shodown stand out in a sea of arcade machines. When it was time for the incredibly violent and blood-filled arcade classic to make a transition over to console, however, it was met with a ton of controversy that ultimately pushed developers to censor the game.

Now SNK is bringing a new, improved and non-censored version Samurai Shodown V Special to PS4 and PS Vita. The announcement came via a post on the PlayStation blog written by SNK’s Joshua Weatherford. In the post, Weatherford admitted that the game has suffered from a past filled with controversy but assured gamers that the future of the gore-filled classic looks bright.

“Today, we are happy to announce that we have heard our fan’s requests to bring this game back in its original form, and have been working with our partners at Code Mystics to deliver the game to PS4 and Vita,” Weatherford writes. “The goal from the start has been to give the game a proper release that will not be marred by the circumstances that hobbled the original AES launch.”

Bringing the game back in a new and improved form means more than just throwing all the intended blood back in the game. The upcoming title will be a more polished version of the game that improves on mechanics while still remaining true to what sets this fighter apart from others in the first place. Rather than focusing on ultimate moves or stringing together combos, Samurai Shodown has always been a game of zoning and that is expected to make a full return. Anyone itching to get their hands on Samurai Shodown V Special will have the chance to play the game at EVO 2017. No firm release date has been given for the game but the teaser trailer promises the game will hit PS4 and PS Vita this summer.