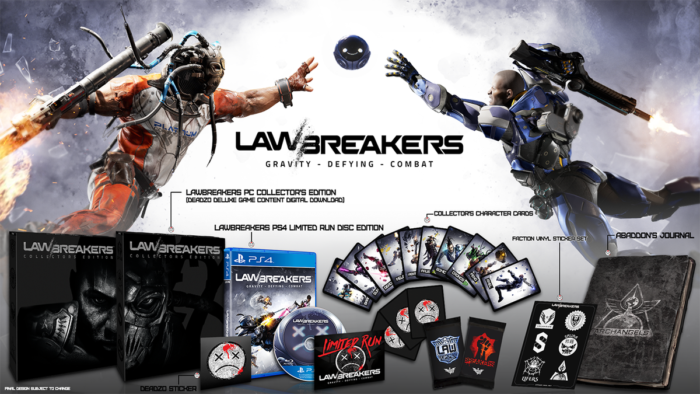 Lawbreakers, the physics-defying competitive shooter, is set to release next month, and today the contents of the physical and collector’s edition of the game have been revealed. Boss Key games, the developers of the title headed by Cliff Bleszinski himself, have teamed up with Limited Run Games to bring us a physical release of Lawbreakers, as well as a collector’s edition stuffed full of extra goodies.

The collector’s edition will cost $69.99, and includes Abbadon’s Journal, a character card pack for each faction, and a sticker set with a postcard. Abbadon’s Journal is a 50+ page book containing fiction, art, and journal space. All of this will be packaged nicely in a neat little numbered box, so you can know exactly when your copy of the game was manufactured. The PS4 version comes with a seperate PS4 game case with the game disc inside, but the PC version simply contains a Steam code packaged in with the box.

The PC versions of Lawbreakers will be manufactured in unlimited quantities, but both the standard and collector’s physical copies of Lawbreakers will be limited; the standard version is getting 5000 copies, with only 2500 collector’s editions being made. If you desperately want it, you’d better hurry! You can buy them directly from Limited Run Games.

Lawbreakers is shaping up to be an extremely fun and unique shooter; there are nine different classes across two factions, each with their own gravity-defying stunts, making it a shooter like you’ve never seen before. If you’re interested in giving it a try, it’s in open beta on steam right now until July 5. The game is set to make its full debut on August 8.