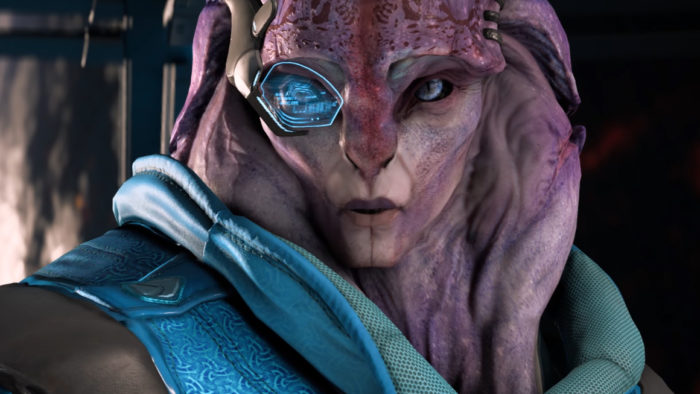 An upcoming 1.08 patch for Mass Effect: Andromeda will bring some substantial changes to the game including an expansion of the character creator, the ability to change Ryder’s appearance onboard the Tempest mid-game, and the largest change is the inclusion of a romance option between Scott Ryder and angara character Jaal.

Previously the player wasn’t able to interact with Jaal romantically at all while playing as the male Ryder option, whereas the female Ryder Sara could. BioWare states the reasoning behind this change was because Scott Ryder did not have a same-sex squadmate that he could pursue romantically prior to this patch, meaning the saucy achievement for completing three romance arcs could not be done with only other male partners. Since the angara are more fluid with how they perceive gender in the game, BioWare felt the inclusion of Jaal’s attraction towards males would feel as natural as his connection with Sara.

In the patch notes BioWare states, “The relationships with your crew are some of the most loved and cherished parts of our games, so we wanted to make sure we got it right. We consulted with members of the LGBTQ community, both externally and within our own studios. After carefully considering all feedback, we decided this was an important change to make, and one that made sense for Jaal, Scott, and the angara. Our writing, editing, and animation teams worked together to ensure this change made sense for Jaal’s character, and the result is a relationship we hope feels as fulfilling and memorable for Scott as it does for Sara.”

The patch is also adjusting dialog between Ryder and transgender character Hainly Abrams, a character that spurred a formal apology from BioWare back in April when the company agreed with criticism that she “was not included in a caring or thoughtful way”. The patch notes state the dialog will be altered to “change the flow of personal information she discusses with Ryder”.

You can check out the rest of the patch here, including fixed issues in both single player and multiplayer and “experimental” support for HDR TV tech. BioWare made no mention on when exactly the patch will release on the supported platforms.