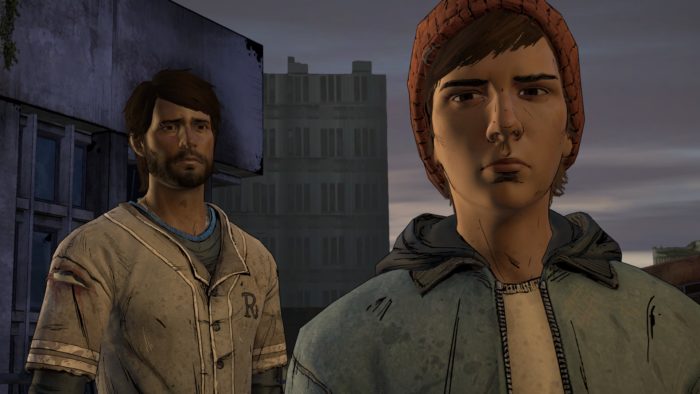 The Walking Dead: A New Frontier Episode 5 on PC

Family has been an underlying theme in Telltale’s The Walking Dead series since its first season back in 2012. However, A New Frontier took that idea one step further, often forcing players to choose between the family they’re born into, and the family that they’ve become a part of on their adventure. Leading into the series finale, there were still a bunch of questions that still needed answering, including exactly how our decisions in previous episodes would come into play. Episode five addressed all of this in a fitting and well-written series finale.

The opening of episode five continues the trend of previous episodes by kicking things off with a flashback. These have helped to flesh out the backstories of the Garcia family, providing insight into the sibling rivalry between Javi and David, and some of the underlying, deep-seated tension underneath. Just as in previous episodes, the flashback in the finale did a perfect job of setting up the remainder of the episode, and what an episode it is.

After the explosive ending to episode four, A New Frontier’s finale has the group searching for a solution to the rather large problem at hand. It’s not an all-out action finale, but one that provides equal measures of action and a more in-depth look at the dynamics of the character relationships, as well as the decisions you’ve made thus far. Rather than more serious issues overshadowing the more trivial differences between characters, these come to head in episode five. They have to face truths they may not necessarily want to, forgive those who blatantly wronged them, and come out the other side alive, as a group or on their own. It’s an interesting little venture to end the series, and one that plays up to the strong cast of characters Telltale has created.

While beating the crap out of any stray Muertos is certainly enjoyable in the finale, it’s the quality of the writing and the conversations the characters have that really steal the show. A New Frontier’s finale is superbly written, allowing the fantastic characters and their unique personalities to shine. Nothing feels out of place in the overall story. There’s a good blend of tongue-in-cheek and serious responses that really play into Javi’s personality (however you’ve made him your own), and the dialogue feels natural and grounded within the context of the series so far and the decisions you’ve made along the way.

With this being A New Frontier’s finale, your own experience could be wholly different to mine depending on the decisions you made along the way, as well as the ones in this episode itself. Episode five is where you’ll see a lot of your decisions from previous episodes finally come into play, even if they’re not in these huge gameplay-changing consequences that you may be expecting. Whether it’s a cursory comment from Clem or just how things are left between Javi and other members of the group, A New Frontier’s final episode gives you closure on these decisions.

This is the most tailored narrative that Telltale has done to date. At one point, a group member recalled a decision I’d made way back at the start of the adventure and it caught me completely off-guard. Other group members just won’t depend on you for help, while general relationships with characters feel far more accentuated if you’ve been lovely or an absolute jackass to them throughout the series. Experiencing all of this was bittersweet. While I loved seeing Javi getting called out for my own dumb mistakes several episodes ago, the fact that my decisions hadn’t been this prevalent throughout the series highlighted this as an area of improvement for Telltale moving forward.

On top of that, Telltale does still totally use a McGuffin in order to nullify one of your previous major decisions going forward. While an understandable necessity for continuation purposes, it feeds back into the notion that player choice is an illusion. It’s something I can only hope Telltale uses sparingly going forward, as it severely undermines player choice.

Like with the past couple of episodes of A New Frontier, the finale wasn’t without technical hitches. While the weird zombie slow-motion animations returning weren’t overly detrimental to the experience, Eleanor randomly fidgeting with the air in front of Javi was a little less forgivable. Of course, this was when playing on PC, so I cannot speak to the stability of the episode on other platforms.

By the time the credits rolled on A New Frontier’s finale, I was satisfied with the way my Javi had evolved. The outcomes of the decisions I made (regardless of how extreme they were) felt natural and progressive, and the consequences of seemingly insignificant conversations felt meaningful. Sure, player choice may not be this complex tangle of alternate storylines in video games just yet, but Telltale’s storytelling, decision-driven formula is still a worthy time investment and a great ride. A New Frontier does Telltale’s The Walking Dead series justice, and its finale brings almost all of the closure that fans have been asking for.