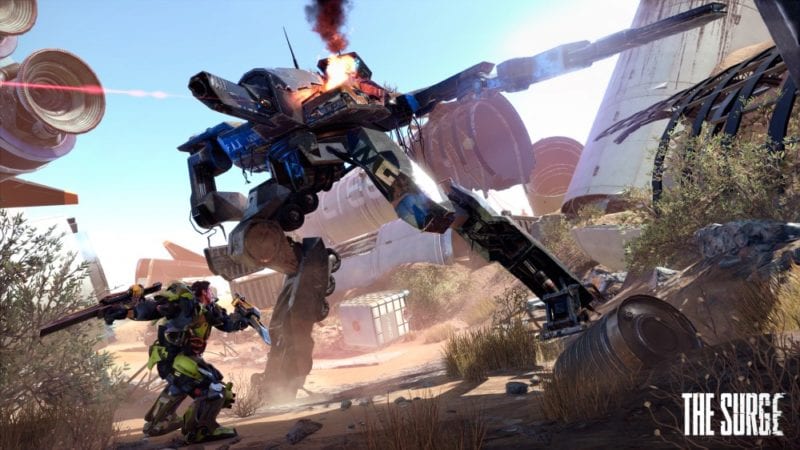 The Surge on PS4 Pro

The world is plagued with environmental and natural diseases and sicknesses. Resources are running low. The planet Earth and its human inhabitants are decaying. In the face of such primitive horror, the CREO organization is the only corporate body that people can rely on. With innovative use of technology, they can save our natural resources, and cure illnesses and disabilities as well.

At least, that’s what Warren believes before everything starts to go awry.

The Surge puts us in control of protagonist Warren, a man in his 30s who also happens to be wheelchair-bound. He gets a job with CREO, and he thinks it’s a pretty sweet deal. After all, how bad can it be to work with machines in scrapyards if it means he’ll get his legs back again? The answer: very bad.

After a gnarly opening sequence (the squeamish might want to avert their eyes) where Warren gets hooked up with his new exo-suit, The Surge throws us straight into the action. Warren wakes up in his new workplace, but the machines are malfunctioning, and his fellow colleagues are mere husks of their former selves – now hostile zombie-like beings that will attack on sight. The game wastes no time in forcing you to learn to defend yourself. Hit R1 to attack, L1 to block. Watch your stamina as it drains whenever you take an action. Usual Souls-like stuff.

The term “Souls-like” is becoming more and more commonplace these days, with numerous developers taking cues from From Software’s successful Soulsborne formula. Deck13 Interactive had a somewhat flawed attempt at replicating that formula with 2014’s Lords of the Fallen. The Surge is their second attempt, and it’s definitely a step in the right direction, though there’s still ample room for improvement.

As far as the combat controls go, it’s pretty basic. R1 is your regular attack, and R2 lets you do a slightly heavier, but also slower, attack. You hit X to dodge, and you hold it down to sprint. The biggest improvement here is just how fluid and natural everything feels. Lords of the Fallen was often criticized for its slow and cumbersome combat, and The Surge suffers from none of that stiltedness. Enemies will lunge at you with surprising lightning speed, but you can react just as quickly too. I did experience some control stickiness during the more hectic fights, and there were times where the dodge just didn’t feel quite as responsive as I’d like. You can also perform a jump attack in the game, but it often feels imprecise even when you’re locked-on that, after a while, I gave up on jump attacks altogether.

Where The Surge really starts to innovate and shine is in its targeting system. The game’s selling point is the player’s ability to target various body parts on an enemy and hack them off. With the game’s targeting system, you can see which parts of an enemy are armored, and where they’re exposed. Attack a body part enough, and you can activate a cool finisher move that has Warren slice it off in slow-mo. It’s pretty neat stuff.

Of course, there’s a gameplay purpose to doing so. By targeting a weak point, you finish off enemies much quicker. But by targeting an armored part, you have a chance of obtaining whatever piece of gear the enemy had equipped on that particular body part. That’s where the game’s gear and crafting system comes into play.

The Surge is rather stingy when it comes to gear pickups around the world, so if you want to make sure your equipment is up to par at all times, you’ll need to farm enemies rather regularly. That’s not a bad thing, though; the build options are quite fun to experiment with, and there are enough varying weapon types to keep things feeling fresh. As you gather more and more gear and blueprints from slain enemies, your options really start to open up with regards to how you want to build Warren.

However, you also need to make sure you actually have enough core power in your exo-suit to actually equip all of this shiny new stuff. That’s the game’s leveling system. By killing enemies, you earn Tech Scrap. Gather enough Tech Scrap, and you can ‘level up’ by increasing your suit’s core power. Do note that just increasing your core power doesn’t actually make you stronger. In fact, you gain one measly little health point for each power unit you obtain with your Scrap. Your stamina, offense, and defense will remain largely the same. The game requires you to equip the right gear to beef up those stats on your own, and that’s where the real challenge lies.

Aside from equipping new armor and weapons, The Surge deepens the customization system with the introduction of implants. Implants are mods that you can install in your exo-suit to give you access to more recovery items, and improve your stats as well. Just like armor and weapons, implants also cost core power, and you can unlock more implant slots by leveling up.

To make things even more challenging, the game imposes a time limit on the player whenever Warren dies and drops his Tech Scrap. Upon leaving the medbay (the game’s equivalent of a bonfire), you’re given two and a half minutes to retrieve your Tech Scrap at the place where you died. If you die again or fail to pick it up before time runs out, all that Scrap is gone forever. This mechanic, combined with the harsh leveling system, makes The Surge a pretty tough game to sink your teeth into. These are good innovations, though, and it encourages more careful play.

That said, exploration and enemy variety in the game feels sorely lacking. The Surge wowed me in its opening hour with how bright and vibrant its dystopian world looked. The environments were colorful but littered with industrial machinery, and the gray, concrete hardness of the factories served as a nice contrast to its outdoors. In short, the game looks good visually, but the level design and exploration bogs it down a little.

Some levels felt like they were dragged out a bit too long, and the discovery of shortcuts often came with a flood of relief that I no longer had to retread the same annoying ground, instead of a sense of accomplishment and triumph. The regular enemy types could’ve used a bit more variety in design, too. There are slow enemies, fast ones, flying ones… the list goes on. But there’s very little difference in design, especially when it comes to the humanoid foes. They’ve all got the same hard concrete look going on, and I get it. It makes sense. The Surge is all about mechanical and industrial sci-fi elements. The CREO corporation wants to feel cold and routine, but that uniformity bleeds into the enemy design as well, and I’m not sure that’s a good thing for the game overall. There are some standout boss designs, and those often feel like a breath of fresh air after you’ve spent hours cutting down the same enemy types, trying to look for the next shortcut.

It definitely doesn’t help that Warren is an absolute dullard as a protagonist who serves as little more than a mouthpiece that voices whatever inane plot questions the player might have, and moves the story exposition along. The Surge could have been a more immersive experience if there was character customization instead of forcing players to step into the shoes of a frankly generic dude (in terms of appearance and personality) with a bad haircut and terrible fashion sense. Of all the cues that Deck13 has been taking from the Soulsborne games, it’s surprising to see that the developer has yet to adopt a character creation system to give players even more freedom in shaping their own experience.

Oh, and if you’re not a fan of strapping large machinery to your character, and that whole machine-man look in general, you’re out of luck. Whether you choose to go for a faster, more agile build, or a heavier tank build, Warren pretty much looks the same regardless. There will be a huge difference in your stats and how fast you can attack, but in terms of aesthetics, Warren will still look like a hulking mass of a man who’s wearing too much tech.

The Surge is a game you’ll play for its innovative targeting system and fun combat. If you’re still mourning the end of the Dark Souls series and are yearning for more punishing, action-heavy games, this should help to alleviate some of that pain. The exploration bits aren’t bad if you’ve got the patience for it, but the level and enemy designs could use a bit more work. Overall, The Surge is a huge step up from Deck13’s last outing, but there’s still quite a ways to go before it can become something truly special.