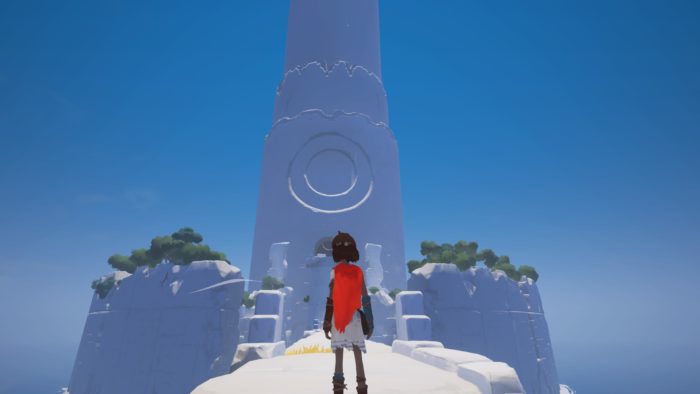 It’s not difficult to see where Rime got its inspiration from. DNA from the likes of Journey and Team Ico’s titles can be seen and felt as you make your way across this Mediterranean-esque island. Yet, while it attempts to emulate some of the very best elements of its inspiration, the experience as a whole doesn’t quite reach the dizzying heights of those that did it first.

Rime tells the story of a young boy who finds himself on a mysterious island after being shipwrecked by a torrential storm. With seemingly no way off the island, you’ll control the boy, exploring the island’s vast stretches, solving its puzzles, and eventually uncovering the secrets it hides. There’s no text to read or cutscenes to spell this out to you, though. Your protagonist is muted, and as far as NPCs go, you’ve got an adorable Fox companion that’ll yelp through the levels to guide you through. Instead, the story must simply be inferred from what you witness on your adventure. It can be difficult to get your head around exactly why you’re doing what you’re doing throughout Rime, but there’s a particular moment later on that helps to clear up some of the questions you may have on your journey.

Your time in Rime is spent, for the most part, advancing your way across the island, solving a variety of puzzles. Sometimes you’ll need to use shadow and light to find the solution and advance forward. Others require sound, and some will have you shifting a battery-like orb around to different machinery and switches in order to open up the way. Unfortunately, it all feels kind of stale and overly simple. Aside from the odd exception, we’ve been doing these kinds of things in platformers before for years, and even then the challenge has been tougher. Considering the puzzles are one of the main components of Rime, it’s disappointing that Tequila Works weren’t prepared to push the boat out even further.

Where Rime did have me cursing, however, was with its finicky controls. Too many times when turning a wheel or shimmying across a ledge did the protagonist simply switch directions despite me holding the same direction on the controller. Yet, when trying to correct it, the game would shift back to normal and have you continuing on in the wrong direction. This was particularly frustrating when trying to jump from ledge to ledge, as the game would suddenly jerk your protagonist out of the animation to jump across at the last minute, resulting in them plummeting to the ground. Even when Rime’s platforming and puzzles were enjoyable, these control issues really weakened the overall experience for me, and it certainly doesn’t feel as tight as the likes of INSIDE or Journey.

Where its puzzles and controls let the experience down, however, the presentation was truly exceptional. Rime’s island is a joy to explore from its vibrant green fields and blossoming trees to its ancient ruins and their eerily-lit halls. Watching geckos dart across walls or jellyfish pulsing in the sea if somewhat hypnotic and helps to make the world feel immersive. It cannot be refuted that Tequila Works has put a heck of a lot of time into ensuring that Rime looks great, it’s just disappointing that the gameplay didn’t quite get the same attention to detail.

A part of me wishes Rime had a free roam mode so I could simply explore and appreciate all of the subtle touches that Tequila Works has added into this world. However, that would be impossible because of the way Rime handles its level transitions. The game is split into four sections, each one with its own unique environment. However, the transition between these doesn’t exactly explain how you end up there. You run into light, hit a loading screen and bam, you’re transported to this entirely different new area. While Rime’s diverse environments helped to keep the somewhat stale gameplay fresh, it messes with the game’s sense of continuity.

Unfortunately, not even Sony’s PS4 Pro could run Rime at a steady framerate. Throughout the six hours I spent with the game, I noticed significant framerate drops at the most unlikely of moments. A dimly-lit cave with little actual detail shouldn’t be causing visible drops in framerate. Rime may well be beautiful, but it’s hardly resource intensive and really shouldn’t be suffering from these hiccups.

Rime has the potential to be so much more than it actually is. It’s got stunning presentation, an intriguing world, and some neat ideas. However, all of this is overshadowed by the more mundane puzzles and glaring technical issues that come with it. While Rime may well have looked to some of the modern greats for inspiration, it’ll struggle to be remembered for half as long.