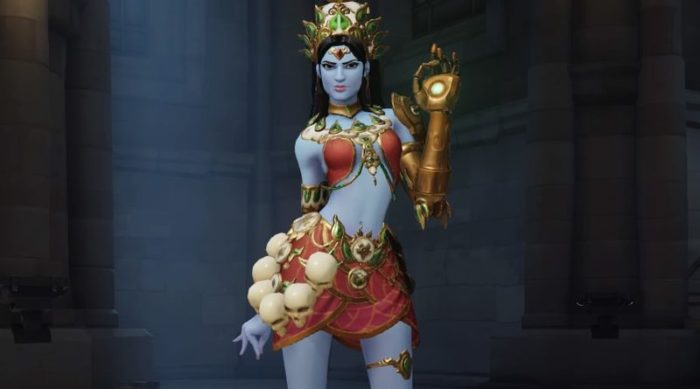 The rumor mill has been busy once again. Many Overwatch fans believed the wildly successful game would celebrate its upcoming one year anniversary with a special event and data miners found information to support such a theory. Now, Overwatch developers are adding fuel to the fire. Event after event many heroes find themselves with some legendary new threads to flaunt but some players feel like poor little Symmetra isn’t getting much love. It’s no surprise considering Symmetra’s history within the game. In Overwatch’s early days she was the borderline useless hero with a lackluster kit, which is probably why there wasn’t much pressure to release new skins for her at the time. After she received a huge overhaul, however, she’s become a popular pick and her newfound fans are crossing their fingers in hopes of receiving some new legendary skins.

As it stands, Symmetra actually hasn’t received any new legendary skins other than the ones that were initially available within the game. While she has gotten a holiday highlight intro and some other skin recoloring options, it’s hard to argue the fact that she’s been largely overlooked. Well, not anymore. One player took to the Battle.net forums to express their desire to see some new legendary skins for Symmetra and the answer they received is a promising one. Jeff Kaplan responded with a vague but exciting, “I think Symmetra fans will be very pleased soon.”

As one could only expect, the forum immediately exploded with other users responding to the comment and expressing their own joy over the idea that Symmetra could receive a new legendary skin soon. Of course, Kaplan’s comment didn’t really confirm one was on the way but that kind of comment drastically increases the odds. At this point, it would be kind of cruel if Symmetra came out of yet another event empty handed. Kaplan’s remark also failed to actually confirm if the next event would actually be for the Overwatch anniversary but, again, it certainly seems like the most plausible theory.