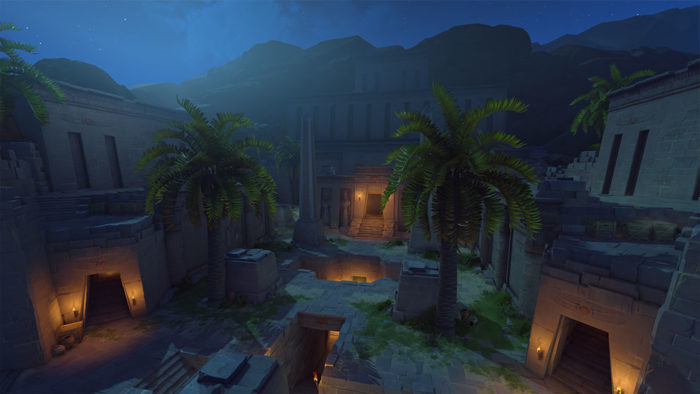 In addition to blessing Overwatch players with an impressive collection of new skins and maps, Blizzard has given the arcade elimination modes a delightful facelift to celebrate the game’s one-year anniversary. The rules of the 3v3 elimination modes are the same—the first team to wipe out the enemy team three times wins. This time around, however, there are two key differences.

You’ll notice the name of the game mode has been changed to 3v3 lockout elimination. This is because you will no longer be able to select the same heroes after winning a round with them. It’s a slight change but one that forces the teams to experiment with different compositions instead of bullying their enemies with characters like Roadhog every round. Keep in mind that this change removes the successful heroes for all teammates so nobody on your team will be able to select the heroes that were being used when you won a previous match. If you lose, however, you’ll have another chance to pick the same heroes and see if the composition may work for you the second time around.

The next difference is the addition of a control point that will unlock instead of allowing players to force a draw. This was a huge problem particularly when an enemy Sombra was on the map. Instead of facing off with enemies, it’s incredibly easy for Sombra to just avoid the battle all together and force a draw, ultimately wasting all your hard work. Now, however, a control point unlocks on the map and the first team to capture that point will be deemed victorious.

It wasn’t uncommon to see teams in 3v3 elimination dominate a map by using three tanks or doubling up on heroes with the ability to heal their teammates. That strategy isn’t as effective in the lockout elimination mode. Using both Zenyatta and Mercy in one round leaves you with a less than impressive collection of healers for the upcoming rounds. This remains true for all hero types—and not just the ones designated by the game itself. Whether it’s DPS characters or key flankers, you want to make sure you’re cognizant of which heroes you’re getting taken out the game for future matches.

This is particularly important depending on which map you’re playing on as well. A map like Necropolis offers high ground options that not every character can quickly reach so it’s important to keep mobility in mind when spreading out characters. Leaving yourself with no hero that can rocket jump, shadow step, wall climb or use a grappling hook to easily close the gap between themselves and a sneaky sniper can leave your team getting picked off too easily.

Pay Attention to the Other Team’s Remaining Options

There was always a small amount of guess work associated with this mode but this time around there is more information to go off of. So take advantage of it. Before the mode became a lockout elimination, it was incredibly hard to plan for a sudden change in the enemy’s team composition. They could whether play it safe with the same trio that took them to victory or attack with a new gameplay that leaves your team unprepared and unable to properly adjust. Having the better composition is an advantage you want to have and now the guesswork has gotten a little easier. When a team wins with a certain composition you may want to consider using heroes that they typically would have been a hard counter against.

For example, realizing that the enemy team has already won with Zarya will make D. Va a more viable hero option for your team in the next round. If the enemy team no longer has options like Soldier: 76, it might be the best time to try out Pharah. Of course, this is no promise that there won’t be any character left who can deal with these heroes but it does help increase the odds that the enemy team won’t be quite as prepared.

Force a Control Point Showdown If You Have To

If you feel like you can’t match the enemy team in a battle of sheer fire power, don’t be afraid to force a showdown over the control point. Despite the elimination mode being considered an “attack” mode, playing it safe and backing off in certain situations could help your team obtain victory. Instead of chasing down an elusive Tracer or going hunting for a Junkrat that likely has traps waiting for you, it may be best to wait it out and force them to come attempt to capture the point. This brings all the action to a concentrated spot on the map. This can really play to your advantage if your team has multiple snipers or other defensive characters.

The addition of the tie breaking control point is also key for any team struggling to deal with a tricky Bastion that’s nestled in the corner and wreaking havoc. While approaching that self-healing, bullet-slinging death machine could result in your team being mowed down, forcing Bastion to try to approach the point instead will place him at the disadvantage since he’s most powerful while in sentry mode.

How to Approach the New Maps

Black Forest is a map that plays pretty defensively so you want to keep that in mind when building your team. This map is void of wide open spaces and much of the combat will likely get pushed to the center of the map and inside the dilapidated castle. That means it’s easy for the battle to drift into close quarters so you want to make sure your defenses are strong. The last thing you want is a trio of squishy characters here that can easily be wiped out through close quarter spam.

Necropolis is a map that seems to be a piece of every good sniper’s dreams. This is only fitting considering the fact that it’s also described as “Ana’s preferred vantage point at the top of the ruins.” In a 3v3 elimination match, it will likely be a preferred vantage point for Widowmaker, Hanzo and Pharah as well. This map provides a lot of vantage points for snipers that can’t be easily accessed by every hero. You’ll want to make sure you have a hero on your team that can reach high vantage points with ease and deal with the snipers that will likely be lurking there.

You’ll also want to stay aware of the pit of death in the center of the map here. While it’s important to try to utilize this pit for characters like Pharah and Lucio who can push their enemies into the gap, it’s also important to remember to steer clear of it. It’s easy to get knocked into the gap but it’s even easier to just lose track of where you are in the middle of the battle and accidentally take two steps too far to one side.

This map gives players a sneak peek at Sombra’s room and that seems to be extremely fitting for this type of map. While you can easily rush to the center of this map for an all out brawl, the best way to emerge victorious is to take advantage of flankers. There are several different paths you can use to sneak behind the enemy and surprise them with an attack from Sombra, Soldier: 76, Genji or other heroes who have impressive mobility and can easily creep around the map undetected.